Two display stands to be made

Hi Scott,
No luck on e-bay, thank you for the offer of the file I guess I have to wait and see what timber I can come up with to fit in to a design yet.

I had to smile when I saw your squirrel (my pet hate is a ******* squirrel) I have a Walnut tree down our garden and last year it had nuts for the first time and I had a battle with the squirrel who got to the nuts first He won.

So I cut a plaque of the tree with my dog watching a cat in the branches watching a mouse in the roots and whilst everyone is watching each other the squirrel is eating my nuts in top of tree, when it's finished going to hang it in the tree for future owners of the tree. 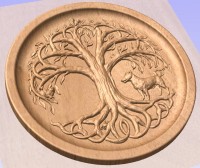 Keep up the good work I look forward to following your postings.
Kind regards
Phill
Top

Now THAT'S what I call a Tree of Life Phill!

BUT it's a lot less reason to hate squirrels than an acquaintance who's shop burned down because a squirrel chewing insulation off his 220V caused some fireworks, or my Dad having to have $2K worth of carpentry/sheetrock work done because a squirrel in the attic managed to find a path all the way to the basement and damaged 2 floors of sheetrock/insulation using the house as an Outhouse!

I can see your point though, as the critters barely leave me a mouthful of wild strawberries/raspberries/blueberrys every year

DID the missing "S" in the wormy Walnut Branch Stand yesterday.
Only mucked it up a Little:(
Brought the file up, LOCKED the font layer after getting the exact size and options,added an "S" layer with the same dimensions and with a reference line moved/nudged into position.

ZOOMED in and hovered over the corner of the exact last letter carved, moved machine to that position, and dropped the tip of the bit down to roughly position the branch.
Used a machinist square along the carved letters, and gently tightened hold downs.
Rechecked/nudged and then brought bit down by .01" fixed nudging,and then nudged .03" into the wood...rechecked and tightened all the way.

HARD from the wheelchair to look straight down at the machinist's square,especially with the dust foot:(

Lifted the bit flush with the piece,and it still looked good...so did an air cut .02 above surface....it looked a hair off, so Nudged both my X and Y Zero +.005", and then carved.

I THINK when pushed the bit into the wood it slid down the slope of the "A" a hair, OR tightening hold downs all the way?
To my eyeball it looks slightly off

First time I've had to try this with 2 live edges, and the reference against my Y fence cut off and hand sanded...Close..but had hoped it would be perfect

NEXT time...I'll get a mirror and a GOOD flashlight, and my lightest hammer to Nudge the piece better!
HOPING there won't BE a next time, but...........

Finally got a sheen/feel I liked on hers!
Just have to Goop leather feet in, and then a last beeswax coat.

That is gorgeous, Scott!
Michael Tyler

Amazing work Scott,
Some day I “Aspire” to get to your level. (Pun intended)

I am curious about your mounting board. Appears to be some type of camlock?

Thanks very much guys!

I think I like it more than the design I was thinking of before I made the Pocket Oopsie:)
I had to get more creative than planned to cover up my mistake

....disadvantage= very little throw and I was forever shimming with Anything at hand before I discovered that using different wedges(use plywood as alternating grain hold better than solid wood) usually means VERY quick jigging. I have grid of threaded inserts/dowel holes and various fences and corner jigs to usually set-up at 0,0 fences, but can be anywhere quickly with dowel alignment and then a couple bolts. NICE two only need two Allen wrenches:)

Advantage is STRONG wedging power, and they press the material Down as it goes in.
Swap out with same size carrier boards is about 30 seconds

I better pick up 2 more while I'm on the page(I gave two away).
scott
"Flatness is King"
Brady W.

I just looked through this and am soooo impressed, really. As a rookie I could ask a dozen questions which I won't do, but would like to ask two:
1. When I have cut a dished out item they seem too rough. I assume this is a tool selection/stepover issue. Can you give me some advice here?
2. I have a problem trying to cut small text. Some advice here would be helpful too. Thanks
Top

Tomg@coj.net wrote:I just looked through this and am soooo impressed, really. As a rookie I could ask a dozen questions which I won't do, but would like to ask two:
1. When I have cut a dished out item they seem too rough. I assume this is a tool selection/stepover issue. Can you give me some advice here?
2. I have a problem trying to cut small text. Some advice here would be helpful too. Thanks

What do you mean by rough? If you mean the top edge where the dish shape meets the rest of the board then that is probably because you are not adding a zero plane when you set up the work in vcarve. Anything that is machined below the material surface requires a zero plane

If you mean the actual bowl or dish shape itself then it will be a stepover issue. If you are getting ridges its because the stepover is to large, a ballnose bit has a rounded cutting edge, the larger the stepover the larger this ridge will be ecause of the shape of the tool.
A lot depends on the work you are doing when it comes to sepover, for just a dish shape then anything under about 8% should give a reasonable finish, sometimes you need to step down a little more if like me & Scott you are not a fan of sanding

For 3D work my stepover varies from about 3 - 8%, the smaller it is the more machining time it takes. The size of the bit used depends on the level of detail you require. With just a dish shape you can use a large diameter bit but with a small stepover

Small text takes a bit of practice, its really about finding out what works best for your machine, really depends what you mean by small & what sort of look you require, one important thing about small text is it generally requires slowing the feed rate right down, due to all the very sudden changes in direction how rigid your machine is plays a big part in how slowly you need to run to get good results. some woods machine better than others so thats another factor.
Your best bet is to but a couple of decent bits, Scott has some that he swears by & will no doubt add to this, then experiment with speed & feed setting until you feel it's at its best. Start really slowly & build up

WAS right out straight today, and now Bobtail Farm is visiting (Highly anticipated:) with his new pup a day early and arriving around sunset

WILL reply when I get some time to think straight!

scott
Thanks for the comments Tom:)
"Flatness is King"
Brady W.

1. When I have cut a dished out item they seem too rough. I assume this is a tool selection/stepover issue. Can you give me some advice here?
2. I have a problem trying to cut small text. Some advice here would be helpful too. Thanks

Scott, you really should be selling your secret sauce.

Sorry Tom...busy all day yesterday, and only 2 days cutting before too warm to use DC in shop....so sawing and surfacing and baking:)
A dight busy before greenhouse gets too warm to saw.

In a canning jar, add Oil(Tung works as good or better but gels 10 times faster) to mark (80% oil), then add beeswax chunks(20%), and in a saucepan with spacer to hold glass off pan surface...
(I use a layer of pennies) bring water up to 150F(you can hold your finger in water....HOT but not burning.
Stir until melted.....turn heat off, and stir often until pudding consistency, and throw canning top on.
Correct consistency for me, is a light touch doesn't penetrate...you stick your finger in, and it changes to easily spread warm butter feel.
Wipe/brush ALL excess off after half hour....VIVA paper towels are most absorbent, and least lint I've found.

DO NOT BUNCH UP RAGS and throw away!!! All oils can self combust!!! Lay flat on concrete floor to dry a few days, or a wet pail until disposed of....(OR burn them like I do:)

Gotta get back to see if I can cut this Oak Burl straight.....wicked nervous on this one as I'm still a babe in the woods with burls...especially ones cut in December and wet. 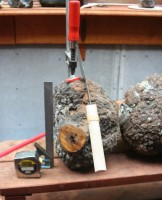 Thank you very much for the suggestions
Top

Finally found a Black Gate Opal that was close to wormhole size and not too blatant.

So FINALLY finished Ural Squirrel!
Cut off copper nails were a better fit than brass brads.

No idea how many coats now, but last 2 were linseed/beeswax to tone the gloss down a hair.

His sister's went out last week to San Fran, but recent plaque took too much time...
and this will be picked up tomorrow, so Mom will tell him this is the New Year ,Improved 2020 model:)
What a great Gram to do all this work for them!