NOT for everyone, but I LOVE free wood

Playing yesterday with some small Black Walnut branches from the "Scrap" pile left at my Aunt's from her big tree(almost 40" Diameter).
Yesterday's branches had unfortunately got tucked away and hidden for 2 years, AND though I had hastily sealed the end grain with an oil/wax mix, I somehow in my haste forgot to seal the branch cuts and the chainsaw cuts on the side. Bad enough I didn't get to the branches for 3 hot days after cuts....should be sealed within Minutes, NOT hours...and certainly not days!!

This branch had 2 different diameters, and the big chainsaw cut on the larger piece, didn't match how I wanted to cut the smaller piece, so table saw cut it in two, and trimmed the chainsaw end grain cuts, and then sealed.

I always cut the "Back" side of the wood after looking at it and guessing the grain. I TRY to keep the Heartwood at the same height end to end.
Also TRY to go down enough so piece will jig up solidly for the top carving. On Black Walnut I try to get into a kind of pretty pattern for the back, but usually stop before Heartwood is hit, as I can always sand a hair more off.
Yesterday's piece was kinda marginal, as Heartwood had actually split from Sapwood. Also splits had developed from the untreated branch stubs and where chainsaw actually hit the wood

BUT, very interesting pattern on the bigger piece;

Today will be doing 2 pieces that had similarly been "lost" behind my shaper and a box somehow and ends had NOT been treated.....Must have been a dead branch on the tree, as insect damage
was noticeable,and the bark was loose. Insects in the shop was scary, so put in oven at 200F for 60 minutes, even though a firewood study by the State said Zero insects at Any stage were alive after 45 minutes at 160F by what is now State Law for incoming firewood from other states.

SO today's victims are the two wormy/split pieces being surfaced on the second side so I can see where the wormwood is, and where to trim/butterfly wedge the splits?

Also one little cut-off that WAS well sealed after trimming off sections for the 2 "Owls in a Branch" already cut, will have "Back" trimmed flat.

Kinda mindless work, but sometimes very rewarding for my small pieces...and if it's REALLY SCRAP I can chuck it in the woods and have more room:)
Last edited by scottp55 on Fri Jun 28, 2019 4:25 pm, edited 1 time in total.
"Flatness is King"
Brady W.

Cool post and cool thoughts on the wood and what you go with it.

I am certain it WILL become something even more cool in the future.
Imagine the Possibilities of a Creative mind

Just came back in to edit, as I forgot the State's temp/duration now required.

Anybody else's pic's are ENTIRELY welcome!!
Hard to have too MANY ideas floating around:)
Oh, a couple pics of stuff done on this "Scrap" already that you've probably already seen. 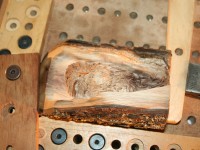 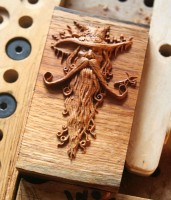 But may be able to use it someplace.
In Opal, sometimes the pattern of color in the rock looks like Ideograms, and are called "Chinese Writing Stones" and sometime command a High value....
I Kept HOPING to get a pattern, or Einstein's Theory, or even a simple "Hello Earthling"...but no such luck

After going all through that and trying to find a method....I felt LUCKY to wind up with 2 similar shaped lines, and then vertical holes that could be filled with a carved stone or contrasting sawdust/CA.

Anyways, at least I added to my stash of Walnut on the couch, and it's not dusty and tucked away in the shop where it's hidden!

Kinda liking that one highly figure one that if you squint REAL hard, and pretend it's a Rorschach test....look kinda/sort like a wolf

All told, I cut about a total of 4.5" off the ends to eliminate the end checking.
House smells like beeswax and oranges...which is good, because with DC going shop hit 85F.
Lot of bark and dust in my steel Dust Deputy container I imagine:)
All taken to 600G, and either oil/waxed, or resin/oil/citrus thinner mix.......oil/wax is better for end grain checking prevention.
scott

Oh...On MOST of those...I cut down to just Before(or AT) the beginning of the Heartwood for what I considered the "TOP"...so carving down into it now will give me the best figure and contrast.
Now that I have 2 parallel faces on the 2 Wormy pieces, it doesn't matter as much because it's easy to jig, and take more wood off later if needed.

Priorities JUST got changed yesterday for surfacing them, as my San Francisco Niece and Nephew visited for the first time in 5 years(now 15 and 10 years old).
MADE myself some more work when I offered them a Piece each....and BOTH were 3D's AND unsigned....2 stands coming up

I got one piece jigged up so Heartwood was level, and surfaced to rough depth, but then Kid's showed up and never took a pic.

Man after my own heart I love to see your images and one I would like to see is your keyboard stand please.

He' had obviously never been in a wheelchair, and had 4 teams of surgeons making a Project of his Spine for 20+ hours!!

This is almost a thread by itself, as I looked all KINDS of computer shelves other people had made to make their lives easier.
Have less than 5 hours before thunderstorms stop my cutting...WILL start another thread later when I get more pics from another computer from 2013-2014.
Must say that my back LOVES the roll under/move out of the way shelf, and not have to constantly turn sideways or put my brakes on/off!

But here's a couple;

Even works if you broke 2 toes that got infected, and you have to keep your foot up on an upside down monoski crutch for 6 weeks

Good on you mate, thanks for sharing interesting how you have the shelf set up, I too look how to make and use to make it easy for me, my spine is totally fused.
I always look out for your posts a pleasure to read.

Many thanks
Phill
Top

It was certainly better than my First set-up when the machine got here!!

I was bashing my feet/leaning over/and twisting 90 degrees all the time.....could only work a few hours before my back called quits, OR go on bed rest for weeks to heal my feet.

OH....Shelf was bolted from underneath to the slab using furniture connection bolts.

Not sure how it would have held up to abuse otherwise, as people leaning on it, and me using it as leverage to move the whole mobile unit around.

Also, having it cantilevered like that...it telegraphs and amplifies all machine vibration!!!
Actually made me a better cutter, as the vibrations of the monitor made it EASY to see when I wasn't cutting smoothly!

Kinda quiet today, so just adding some pics of 2017 firewood I stole with permission from Libby's Camps on on of Dad's and my fly fishing excursions;


All Birdseye Maple of course..Kinda easy to notice in the pile if a piece of bark is split off.
Birdseye on the outer trunk goes straight into core all the way pretty much.
If surfaced from the bark toward core=Birdseye
If wood is split towards the core already,and you surface bark to core= streaks of the Birdseye show as streaks of highly figure wood.
Just mentioning.
scot

Here's how it looks if you surface bark to core presplit Birdseye;
See how the Birdseye traverses the full radius of the tree in almost a straight line? I never knew

Had a Maple trunk split off in early Winter.

Decided 2 days ago to go out with my trusty 30" bowsaw, and see how many ways you can use a bowsaw on a hanging 25' section in a wheelchair on a kinda steep slope without getting scrunched as it came down.
My cutting with left hand and bowsaw upside down needs work!

Trunk came almost straight down, so only the 6" section was resting on the ground and punky.

Got seven pieces(3 branch crotch) I decided to throw up towards house and drag in:)
Most will just become plain vanilla 3" thick pieces, but hoping for Some figure.
No wood stove...so just would have become a brush pile.

I baked for bugs the most difficult cutting pieces first, this is second batch.

First one I just had to flatten a patch so I could get a straight cut on table saw, as there was a dead branch piece on top...now a small crotch piece, and a plain vanilla piece.
Safe-Z's set to .005"...and Still first pass was .55" where branch knob came out!

Second to cut was a splintered WRECK where the tree snapped and fractured, BUT after cutting off the piece embedded in the ground...it was VERY slightly punky, and was hoping for a little spalt....
AND it was branch crotch......SOOO...I Hid behind the plexi shield while it threw slivers around the shop

Thinner than hoped once past the fractures, But MAY be good for something down the line.

Well I must concede Scott you have to be the verifiable master of clamping and fixturing on your cnc. I certainly cannot wait to see what pieces lie within this fallen branch. I know one thing for certain though they will certainly be exceptional no matter what they become.
As always the stories behind your material selection and gathering along with the vivid explanation you provide during you creation of your works makes me feel like I am right there along side of you creating works of art.
Thanks for sharing and doing what you do. Always a pleasure.

Thanks Dwayne!
I was about to ask if people were bored with all this simple CNC surfacing(some no doubt are:)..so your comment was nicely timed!!
This is that knotty left side piece from first log.
No way to orient it the way I wanted, until I tablesawed it off.
Oriented like I usually do for branch crotch....all 3 centers of pith at the same height...seems to work well?

Nothing interesting at first except the deep knot, and was taking .08" off per pass until knot got really solid...barely a hint of figure.
Went down .05" to start getting a better finish, and VOILA....FIGURE

Had to mix up a new batch of what I use for primary coats for figured woods now. (THIS batch is very slightly heavy on the Pine Resin as the wood still needs to dry..so more solids)

Kinda liking it...will not carve the front of it with the bark on until I figure what it will be. NOT bad for the back of a project with only 1 coat on.

Back to cutting...I was interrupted this morning:(
scott
"Flatness is King"
Brady W.