At the User Group Meeting in Chicago last year Beki did a session on VCarve inlays for beginners. She has taken the time to highlight some of the easy mistakes to make and things to look out for when creating your own inlay designs for the first time.

If you're thinking about having a go at creating your own inlay designs this is the perfect place to start, you can watch the full video and download the free project files here: https://www.vectric.com/vectric-communi ... CarveInlay

If this project inspires you to make your own VCarve inlay project we would love to see how you get on. Share you projects, tips and advice here too 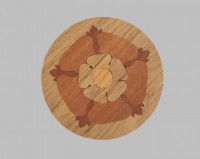 Thank you for sharing this and for Beki's work in putting it together. Look forward to reviewing it and giving it a try.
Top

After glue clamping it, often helps to flip piece 180, so excess glue runs onto the waste...reinforces the waste a little also..so less chipout if clearing bit grabs a "Chunk".
NICE that Beki also show the Oopsie with the "Gaposis" also.....Nice to see the cutout!
Always learn more from mistakes:)
Most people don't dissect their cuts to see the actuality of their settings!
Thanks!

scott
Also a thin surface coat of finish helps prevent glue marks(it'll get sanded off anyways most likely)
Running toolpaths twice is excellent for fuzzies, as well and think Paul mentioned he does it.....so so do I

I wanted to add a quick link to the original thread that is referenced in Beki's presentation that was started by Paul and Dan with the PDF directions. It can be found here:

I will also bump it back up with a link to this thread so that users can find Beki's presentation/information.
Last edited by meflick on Thu Mar 21, 2019 4:11 pm, edited 1 time in total.
Top

Thanks for posting Beki's excellent tutorial about the Zank V-Carve Inlay Procedure--it is a really nice and clear introduction to the techniques involved in Zank VIP and does a good job of summarizing and incorporating some of the refinements that have emerged from 13 years of users' experiences since Paul first disclosed his discoveries in 2006.
Top

meflick wrote:I wanted to add a quick link to the original thread that is referenced in Beki's presentation that was started by Paul and Dan with the PDF directions. It can be found here:

I Have also added a comment to it with a link to this thread so that users can find Beki's presentation/information.

I'm afraid that Beki's specification for the male flat depth in the preview is completely wrong. As the male flat depth determines the empty space above the female piece between it and deepest cut of the male piece , and does not have anything to do with how they fit together, it can be any reasonable number. Probably between .05" and .5". Another erroneous statement is that the male inlay start depth plus its flat depth must equal the female flat depth. It is wrong for the same reason.

My diagram shows how these dimensions work:

Regarding inlays, I have a small problem with some letter inlays. The letters will fit perfectly 95% of the way, and then there will be a thin gap (less that 1/32") maybe 1/8 to 1/4 inch long, somewhere along the side of the letter. One sample was the word "Together". Six of the eight letters fit perfectly, but two had a small gap or two, and not in the same location. On one of the male "e's" after carving it out I saw a small flat spot on the bottom of the "e" which gave me a gap when glued in. I keep the tool speed down around 40-50in/min. Any thoughts?

FYI, I then take a razor knife and slice off some shavings from the male scrape wood and glue them in and sand them down. It's small enough it's hardly noticeable.
Top

Tomg---Are you using Zank V-Carve Inlay procedures, or are you using the Vectric software inlay function? It seems to me that this same question came up recently, and unnecessarily, in another recent thread. I say it's unnecessary confusion because the inlay technique at the heart of this OP could be referred to via the name of its inventor, Zank, or Zank VIP, or Zank V-inlay, or Zank whatever...and everyone here would quickly know that we are talking about an inlay technique that specifically employs V-bits and Vectric's V-carve toolpaths discovered by Paul Zank (i.e., not Vectric's Inlay toolpaths!) to produce an inlaid project. It was nice to see that Beki was clear about the distinction in her tutorial.

Mike--I'd have to go back and watch Beki's tutorial again, but I think you are right. Using the original Zank specs in her multi-wood project clearly led to an unnecessarily large glue gap that showed up as a gaping cavern when she carved into the inlaid piece. You have certainly pointed out that issue with the original numbers in the Zank-Durrant white paper in the past. So, she decided to change the male specs to make the male piece fit deeper into the female engraving--0.28" start depth, I think...which is fine. And, as you would say, the difference between the female flat depth and the male start depth defines the glue gap. But, I think, she set the male flat depth to 0.02" apparently thinking that was what controlled the glue gap....if that was the thinking, it was indeed an incorrect assumption.

The project came out okay, but with only 0.02" of waste material above the surface of the female workpiece there would not have been much of a margin for removing the waste backing. Since she doesn't use a bandsaw for that, it didn't really seem to matter but it would have been a problem for the most common method of waste backing removal.

One apparent limitation on the male workpiece to keep in mind, depending on exactly what V-bits are used for Zank V-inlay work, is that the (start depth + flat depth) does need to be less than or, at most, equal to, the cutting depth of the bit. Thus, V-bits with a 1/4" cutting diameter and a correspondingly shallow cutting depth could not be used in projects where the male workpiece required large (start depth + flat depth) numbers.

As a related aside, I thought I'd return to one of my favorite Zank VIP topics: Waste-backing removal. My current favorite method, which really does depend on having about 0.1" of a gap between female surface and the male flat, is to abrade it off with an edge grinder using a cupped 36-grit carbide grinding wheel. With the 0.1" margin and a little care & attention, that bad-boy tool will grind the waste backing off of any Zank project in very short order. Obviously, with such an aggressive tool it requires some caution when you get down close to the end of the waste backing, but then one simply switches over to the usual sanding protocols to finish up. So, if your project won't fit into your bandsaw, and you don't want to take the trouble of milling off waste material with your CNC, the edge grinder (with good hand control) can make pretty short work of any waste-backing removal. Makes a hell of a lot of sawdust, too, which keeps everyone out of my shop while I'm working.
Top

I'm using the Zank V-Carve. If you look at the attached picture you can see the flat spot on the bottom of the "e". The female cuts always seem to be fine, it's the male cuts that have the problems. 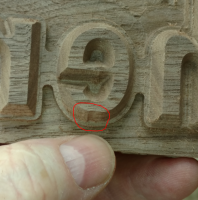 Tomg,
When you preview the male carving toolpath in Vectric, do you see the same flaw at the bottom of the letter?
Top

Tomg- if you are getting a gap on the inlays check the angle of the V-Bit against the design. We have had to change brands due to sharpening discrepancies with one manufacturer.

You may want to check your machine for square also as any variation will be doubled on V-inlay since you are flipping the male over when gluing.

In regards to your flat spot, that is likely due to machine or Spindle flex. If this is a one time design, try changing the starting point in node edit where it won’t be critical or noticed. If it’s a production piece, it may be worth the investment in time to pocket out material in advance of the V-bit to minimize flex on your machine, but that is an entirely different discussion and irrelevant for larger industrial machines.
Top

This project came off the back of me wanting to try the VCarve Inlay procedure for the first time, things I learnt, things that failed, and things that worked etc. Which was all documented and put out in the form of a presentation at last years User Group Meeting.

Scott: Thank you for your tips on gluing, by flipping the part 180 (so simple and I never thought of doing that!) And running the toolpaths twice is definitely something I will try next time

FixitMike: Thank you for your feedback, everything you mentioned about calculations of how the Male start depth is equal to how far the male part will be inserted into the female adjoining part, and how the flat depth is equal to how far out of the female, the male chamfer appears, and also the glue gap can be determined by taking away the Male start depth from the female flat depth are all spot on.

There may have been some confusion or perhaps I did not explain this thoroughly enough, however in my example I was trying to find a simple solution which does not need too much thought on calculating all of the above. I found if the total combined Male Start Depth and Male Flat Depth are equal to the Female Flat Depth then the Male Flat depth is equal to the Glue Gap and the Gap above the Female Pocket, which is easier to workout and makes this process seem a little easier for any novice wishing to try out VCarve Inlays.

As demonstrated this process and values used works really well when using soley a CNC machine to create the carvings, as the small gap above and below enable well mated parts and also no need for the larger gap for the band saw. I’ve attached a diagram to demonstrate various settings and the mating of the two parts.

This is one of the things I love about the forum, the feedback and advice everyone provides

Thank you for sharing your presentation from the User Group Meeting for those of us who could not be there in person. I have watched the video, and downloaded the different "extra" tips and information shared as well as any charts, including this one you just shared. Thank you for that. I haven't tried it yet, hope to soon. I appreciate you trying to make it as easy as possible for us novices. I thank everyone who has shared additional tips and information here and in the original thread by Paul sharing the concept to begin with.
Top

Thank you all for the responses, I've been out with the flu and haven't had a chance to try any of the suggestions.
Top
Post Reply
15 posts • Page 1 of 1