I don't normally spend too much time griping about software issues that look to me like they can be fixed with reasonable effort, either by continuing to struggle with the learning curve or by appealing to the manufacturer for technical help.

However, I've encountered a possible bug in VCarve Desktop V.9 that I haven't been able to make headway with, although I eventually did figure out a clunky workaround. What is worse, to me, I eventually wrote to Vectric Customer Support about the issue which elicited a request for some relevant .crv files, and I sent the appropriate files immediately. After a couple of weeks and several e-mail enquiries back to Vectric to ask if they had received my files and/or analyzed the issue....it's been complete and total silence from them. They are not responding at all.

Here's the gist: Pretty much the sole focus of my work with VCarve Desktop V.9 is to design wood inlay projects that are executed on a NWA Piranha FX machine. I know there others at this forum who have much more experience than I with CNC inlay techniques, but over the past couple of months I've been able to complete some very nice projects using artwork, text or combinations of the two.
However, recently I tried to make a small sign that included the text, "The Blue Dolphin Inn", in a font called Brush Script. A preview of the "female" engraving toolpath for this text looked perfect, so I used it to make a mirror image with appropriate offsets and a pocket border to produce the "male" inlay text for the sign.

However, a preview of the "male" V-carve inlay toolpath showed that the letter "l" in Blue and Dolphin were missing! After several fruitless attempts to solve this problem I tried a different script font, Segoe....same type of result! When I used the same exact project parameters with AR Berkeley font (non-script) there was no problem!


Playing with this some more, I found out that there is not always a toolpath problem with the mirror image of script text. Many short words or phrases look fine, but there can be flaws ranging from subtle (i.e., part of a letter missing) to egregious (one or more full letters missing)--always in the V-carve file for the toolpath used to carve out the "male" inlay piece.

After Vectric apparently decided to ignore my repeated requests for help (or at least insight), I finally figured out that I could design the text in script fonts with Photoshop, create separate .jpegs of the text and its mirror image, import them to VCarve and vectorize, then the 'female' and 'male' V-carve toolpaths were flawless.

I could supply this forum with my .crv files; however, I urge those specifically interested to try out a 5 minute experiment with their own VCarve software just to see if the problem is more widespread than my specific experience with Desktop V.9....Using the True Text setting choose Brush Script or Segoe Script to write "The Blue Dolphin Inn", use this text to create a mirror image and then calculate and preview the V-carve toolpath for the mirror image. Check the preview carefully to see if all of the letters are really there...

I would of course appreciate any feedback and advice from the many experienced Vectric software users here at the forum.
Top

That happens to me all the time, it is usually because one letter is "over lapping" another or because part of the letter is an "open loop". I can generally fix it in a few seconds.

Post your file. Several of us will look at it.
Top

Played around with this and found that on mine i lost the ( "L & I" in dolphin ) I noticed that when looking close at the letters, that the vectors were overlapping. I went in and converted the text to curves and welded them (i welded the whole word) and it took care of the problem 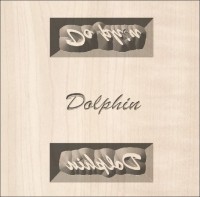 laflippin wrote:... I tried to make a small sign that included the text, "The Blue Dolphin Inn", in a font called Brush Script. A preview of the "female" engraving toolpath for this text looked perfect, so I used it to make a mirror image with appropriate offsets and a pocket border to produce the "male" inlay text for the sign.

However, a preview of the "male" V-carve inlay toolpath showed that the letter "l" in Blue and Dolphin were missing! After several fruitless attempts to solve this problem I tried a different script font, Segoe....same type of result! When I used the same exact project parameters with AR Berkeley font (non-script) there was no problem!...

Script fonts often have overlaps that the user (you) must correct. This is "old news" for the more experienced users, but it apparently is "new news" for you. Here is a link to a short video giving instruction on what needs to be done for overlapping script fonts mentioned at about 1:40 into the video:

I'm sure after viewing the video, you will understand there is absolutely nothing wrong with the software whatsoever. In fact, quite the contrary. Vectric has kindly given us the tools to fix inherent font issues such as this.

First of all, I'd like to apologise to laflippin as this support request unfortunately fell 'through the cracks' as the support engineer who was dealing with this has been on vacation since the 15th of August and we failed to re-assign the outstanding ticket to a different support engineer. We will look at our procedures for handling this.

We received the files after the assigned engineer had left on vacation and looking at them, the forum members who have responded are correct about the issues. The fonts being used have loads of overlapping vectors, and although we do try and make sense of these, it is by no means guaranteed that a 'dumb' computer can do so. Rotating and mirroring script fonts makes this task much more difficult and hugely reduces the likelihood of success.

When vectors overlap, what a human sees and what a computer 'sees' are very different things. To a human, it is very easy to disambiguate what is an 'overlap' in a script font and what is the actual letter the user wants cut, we know these are 'letters'. For a computer it is just a collection of curves and it has to try and decide what is outside and what is inside. For a human, imagine standing inside a tall hedge maze and trying to decide what shape the overall maze is when all you can see is local tall hedges, with no top down view of the whole maze. This is basically the position the computer is in when it is presented with a load of overlapping vectors. Sometimes the computer algorithms are able to figure it out, sometimes they aren't.

For 'normal' linear text (which accounts for probably 99% of text that our users cut) we have algorithms for script fonts which help use get this right the majority of the time. If the text is rotated, mirrored, scaled or distorted these hints are lost and we then just have a series of overlapping vectors which don't represent an unambiguous shape to cut.

With rotated, mirrored or scaled text, the likelihood of the computer making different decisions about what is inside / outside increase enormously compared to what any human would decide. To carry this analogy further, the 'Captcha' codes we see all over the web for security on web forms are designed to be 'relatively' easy for a human to identify the series of letters but almost impossible for a computer.

Thank you everyone for your thorough analyses of this issue and suggestions for working around it. As one poster suggested, this is indeed "new news" to me...and a very fascinating peek into how VCarve software interprets its tasks.


Special thanks also to Brian for kindly explaining what happened at Vectric to my requests for help with this issue. I definitely understand that sometimes things can fall through cracks--especially in August when vacation schedules abound.

Although my clunky workaround described in the OP solved a short-term problem, I am looking forward to trying the suggestions made in your responses.

I've run into this kind of thing and other related issues and honestly, the "fix" is that after you have your text pretty much the way you want it to look, you need to convert to curves, clean it up and then group it for cutting. It can be tedious, but the end result is flowing script that "looks right" after you've done the spacing/kerning thing and melded things together into continuous vectors.
Top

Same thing when sending stuff to my Laser, Corel Draw has more or less the exact same fix for the overlapping script fonts.
Top
Post Reply
8 posts • Page 1 of 1