I have searched but cannot seem to find what I am looking for.
I am building a 48x96 router table. I have the X axis are to long axis. I am using a Precision Plasma build plans. I am having a hard time trying to figure out how to level the top bar, 1/2" x 3" wide to be as close to straight as possible. The gantry rides on top of the plate on bearings.

A string is too thick to see with and a 4 foot level shows gaps from one end to the other on the level. I know how to shim it, but I what to use a straight line or straight edge for the whole 10 ft length of the axis? Is this doable? Any suggestions?

I know this is not perfect, but am hoping to get as close to best that I can.

How about a laser level? Most are a little expensive, however I've seen them around $12.00 on Amazon.com.
Top

I suspect that a laser level will not be accurate enough for what is desired here.

What is desired is flat XY movement. With straight bars, it doesn't need to be level. An accurate 4 foot level should work, just move it along the bar. Of course a 6 foot level will be easier.

Not sure if this will suit what you're trying to do, but I have used this method before on other projects.
At either end of what you are trying to level, make up a couple of known equal length posts and mount them at the ends of the rail, so that the top of the posts is higher than the rail and the posts are mounted past the ends of the rail.
Between these posts, string a length of fishing line over the top of the posts and pull it very tight.
There should be a gap between the entire length of the rail and line.
Using a set of automotive feeler gauges, take measurements between the rail top and the line.
From there you can determin the shim thickness variations you will need to make the rail straight.
Top

Thank you all for your response.

I will try to use your ideas. Not sure about a laser level, but will see what is available.

I think the string trick might work. I am not sure how accurate the rails need to be, but I would like to get as close as possible.

I am starting to think this was a bad choice. Maybe should have went with different rails?

I let you know how I make out.

I own several lasers and laser levels which I've used over several decades, which are extremely actuate. One I have in my desk drawer, that now I mainly use to drive my dogs nuts by chasing the red dot, I just measured the dot up close,(within 6") which was 1/8". Across the room (about 12-feet it still measured an 1/8". By measuring at the bottom of the dot, you can get an actuate measurement. If you don't trust the small level on it, you can always tape it to the 4-ft level. Other expensive lasers I own, costing thousands of dollars, I've used for setting the height of ceiling tiles, and for outside for setting grades, among many other uses. I also own Optical Transits that is used in surveying, which I've checked the lasers and visa/versa.

After saying that, I've also used a caulk line, as suggested, which is much cheaper, but less trusting over a long distance. Using it over a 8-ft span would be a good idea, unless you can go to your tool box like me and get the laser. 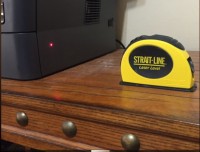 Thanks for the reply. I tried a small laser level and it was pretty good.

I got a 6 foot level and used a good set of feeler guages.

I am within 8 thousands of an inch and am getting some more shim stock. I am not sure how close I can get but for a DIY project, I think it is coming good.

what are you going to use the machine for once it is complete? problem with any built is any inaccuracy is easily multiplied so what might seem reasonably accurate on one part of the build could cause unacceptable errors when you finished.
my concern is not so much that the rails are inaccurate but that the material you are using is not really suitable for the job. Problem with flat bar is it can bend & flex, gantry's can be pretty heavy by the time you have a router or spindle mounted & then there are the forces applied to it by actually cutting.
Generally speaking the machine frame supporting your linear rails would be box section. Once the frame is welded up there are several different methods for mounting the rails level & parallel to each other. Grinding, shimming & epoxy levelling are ways it can be done.
Top

Attached is a view of thee rail attached to the frame. The frame is 3x3 square tube with 2x1/2 tube on top for bolting the bar to every 12 inches. The bar is 3x1/2" cold rolled. The other picture is a very similar frame I used for my plasma table. The frames are very rigid.

The gantry runs smooth on the rails.
I am wanting to cut designs in wood like one piece doors for a customer. The other things are small panels and doors for cabinets. I would like to get accurate enough to try doing lithopanes sometime in the future.

I try to spend as much time as I can searching the forums for information. This is a great site to learn from.

I appreciate any comments as this is a new venture. I think as is this would be ok for smaller panels and such, but am concerned about the longer and wider jobs. That's my reasons for trying to get as accurate as possible.

Thank you for your comments, 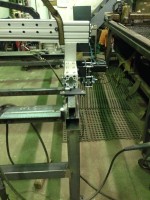 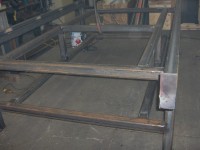 For lithophanes use a corner of the cnc bed, not the middle. You'll get a lot less flex, hence , more accuracy. Norm
Top

I am within 8 thousands of an inch and am getting some more shim stock. I am not sure how close I can get but for a DIY project, I think it is coming good.

Once you put on your spoilboard and plane it, you will be dead on. Gary
Top

Gary,
I wouldn't get too concerned with using a lot of shim stock since the size of cold rolled steel you are using will have a minimum of .005" to a maximum of .012" variance in thickness and it's doubtful you get it all out. I'd be just as concerned with leveling it end to end, side to side and corner to corner. Also making sure the flats on both sides remain flat with each other.
Nice build!
Top

ohiococonut wrote:Gary,
I wouldn't get too concerned with using a lot of shim stock since the size of cold rolled steel you are using will have a minimum of .005" to a maximum of .012" variance in thickness and it's doubtful you get it all out. I'd be just as concerned with leveling it end to end, side to side and corner to corner. Also making sure the flats on both sides remain flat with each other.
Nice build!

Thanks for the reply.

Yes the bar is out as you said. I have the bars to within 8 tho and cannot see getting any closer. I guess I was expecting too much.

I realize now that this design worked fine for my plasma table as the torch height control moves to correct the difference in height.

I am hoping to be close enough to be able to do some good cuts for lithopanes. I was told to use the corner of the table as there will be less flexing.

Now the fun part will start soon. I am going to finish the small parts to the table, clean her up and paint the frame up.I am getting excited to learn to use this table and see just what can be done with it.

Thanks for all the reply's from all! I will post more as I go along. Probably start a new thread.