I know, another darn clock, but I kinda like this one and figured may as well use the art from the last one.

It probably would look better if I had engraved the marlin on 1/4" plex and lite with blue and the squid on another 1/4" and lite with red, then sandwiched but all I had was 3/8" plex. It worked OK but the colors mixed more than I wanted.

It's 11.5" dia. walnut face, cherry back with matte black back panel. 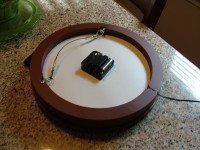 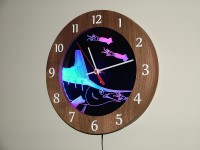 That is really cool!
Did you just use two different color led's on opposite sides? I have to try that.

Thanks, yes there is 6 blue lower left and 6 red upper right. Its hard (at least for me) to photograph LED's, the little shadows at the tip of rays in the dorsal fin, and other weirdness, there's no green when viewed for example?

Anyway, you can generally cut LED strips every three diodes.

If you want really good multi-color displays you can engrave each layer of art on a separate pc. of acrylic and stack each color. 1/4" cast acrylic works best if you buy the narrow 6 mm wide strips.

Also, I soldered in one of the miniature in-line dimmer-controllers at the power supply, it gives you on-off and dim plus other nonsense. The ability to dim for 3 bucks is nice.
Top

Wow, that's really nice. I do lot of acrylic carving and I like how you put it in this clock. Where did you get the dimmer for it? I'm looking to buy a couple a couple of them.

Very sharp I really like it. That would be cool to see being on different layers. Job well done!!
Top


Ebay, US supplier (NJ), they sell plastic covered waterproof strips as well but they are 8mm wide. pretty cheap, free shipping (seem OK)
Its a little trouble cutting back the plastic or silicone? to solider. I used to by the 5mm wide strips from Lumenedge but have found some of the narrow ones on Ebay at times.

P.S guess the dimmer/controllers are only a buck+ in 20s

Correction.... Sorry, the cheap little dimmers I recommended do not have off-on and they only have about six levels of dim, the R/F single color in-line controllers have many more features, including full range of dim-bright and on-off. But they (cheap ones) work for many uses, (like lights too bright)

The best price I've found the single color R/F controllers in the US is around $6.00 and you may as well replace the battery when you buy them. (cheap battery?)

glenn, everything about your clock is really nice, including the back..Did you make that hanger or was it purchased that way?...joe
Top

See I am going to go against the grain on this one Glenn lol,
Clock looks great, even the back looks really well made, marlin & squid look good & I'm a fan of LED lighting on items like this.
I'm just not that keen on the mixing of the 2 colours, if it had been 2 separate acrylic panels as you had planned then I think it would have been absolutely brilliant. Photos maybe don't do it as much justice as it deserves but I would really have liked to see it without the mixed colour.
Still that's just my opinion & clearly other s don't agree with me lol

I am curious though because I haven't come across LED strip that narrow, 8mm & 10mm seem to be the 2 flavours available in the UK.
Top

Good criticism is fine, and I appreciate it! It really does look better (to me) than the photo, there is no green and the white marlin is predominantly blue and the squid red with hues of blue. But your right two panels would be better, I think?........I need to order some .25 acrylic.

The funny thing is I've made various LED panels and other do-dads and don't really care that much for most of them but this thing actually looks pretty neat. I'm pretty sure when my Charter boat buddy's see it all I'll hear is "where's mine", my favorite response is "your on the list", they know what that means!

We are pretty much in the White marlin capital of the world here and besides commercial fishing for 20plus years have done a lot of marlin tournament and fun fishing.
When you see White marlin balling squid its quite a sight, sometimes 20+ fish on a acre of squid. The squid can change color from red to clear blue to white and the marlin light up like a neon sign, almost like a glow, hard to describe and I can't tell you how many different colors I've seen on live billfish. We also have world class Blue marlin as well, the state record caught years ago (1978) by a Capt. friend weighed 1093 lbs. Its in a display case a few blocks from here. I actually repainted the beast about 6 years ago, 14' of fiberglass marlin on my back porch

Martin, the 6mm wide strips are more common now, even in RGB, Lumenedge Co. was where I first bought them but I bought some waterproof 6mm single color on Ebay
No Idea, across the pond....

Oh I think it's a great bit of work Glenn, just felt that the edge was taken off it by the mix of colours I could see especially on the marlin but then again some people might prefer it that way, constructive criticism I find very helpful personally.
Kind of know what you mean by the colours you've seen on the fish, I've seen a similar sort of thing with shoals of mackerel although I don't suppose they are any where near as impressive as the marlin lol.

Did a bit of snooping about ebay to see if I could find anything & was surprised just how much I found once I changed my normal search terms a little, found a few suppliers who shipped to the UK & did 5mm wide tape plus some side emitting rolls that are only 3mm wide although I could only find those in white.
Been a while since I actually searched for anything new so my eyes lit up when I found some strips made up of individually programmable 5050 LED's. Need to do a bit more research on those but can see me buying a metre or 2 to play about with lol
Top
Post Reply
12 posts • Page 1 of 1