I am new to Aspire and this forum, and am anxious to learn a lot. I am working with text and seem to be having a terrible time. I have been using 60 and 90 vbits for the larger text, and am starting to figure out how to keep it from too deep. However, I can't figure out the best way to do small type (10+ point) for plaques, etc. Which bit is the best? How about for fine work like borders, etc.? I probably am not asking this correctly, not being totally familiar with all of the terms. Thank you! Jennie
Top 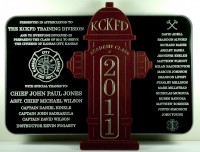 Thank you! Do you set a bottom depth to keep the text crisp and clear? Any other settings I should use?
Top

with the smaller font no I don't set a max depth but that is a personal pref.
Top

Very nice plaque Jim. What font did you use for the smaller letters, it's very readable.

Tip, If the typeface you are using has sharp corners and your finished engraving has rounded corners then the top of material has been set below the actual top of the material.
The difference is chalk & cheese.
Top

If VCarving letters correctly there is no need to add space to the text.
Top

It pays to do some reading up on fonts and typography.

The urge to space the letters further apart to "increase readability" is generally a mistake. Fonts are designed with something called "kerning" built into them. That is the space between letters. IIRC kerning is not the same for every letter. The person who designs the font did it with a goal in mind of achieving a certain look to the font, kerning plays an important role in that.

All that said, if a person wants to space them out differently, all well and good if that person is in charge of how it is supposed to look. But if you are doing work for a customer who specs "helvetica" and you start adjusting the kerning, it is not going to look like helvetica, sorta, but not really.

Every now and then I see someone who cannot resist the urge to adjust the heights of individual letters. The classic is making the "O" the same height as all the other letters. Talk about looking weird! The "O" can only be the same height if the font is basically rectangular in shape.
Top

For those who feel that kerning is not necessary, look at this and decide which line looks better. Now guess which one was kerned.
Note that with lead type, kerning could only add to the space between letters, while with computer fonts kerning can also subtract from the spacing. Also, with lead type, the letter pairs ff, fi, and ffi were usually cast as a single piece, since separately they appeared to have too much space between them.

Adjusting the space between the letters is often necessary to suit individual "kerning Pairs" such as when certain letters are placed together.
URW (German type foundry) claimed to have 11,000 kerning pairs setup in their kerning tables which would alter the spacing between certain paired letters when used with other letters within a word that would otherwise look oddly spaced.

Unfortunately not all fonts used today have been created by people with the same skill levels or attention to detail and of course their target audience often doesnt have a clue anyway.

Fonts can be downloaded free fom many sites. Many have very similar character shapes to another original font but are a poor ripoff. Many on close inspection are as rough as guts.
Many have little or no decent kerning tables as the so called "designer" doesn't have the knowledge or experience to know better..

So my opinion is that say for Headline text I nearly always adjust the spacing only on certain letters, but not because it's small.
Top

I'd like to add that when I bought my first PC it was part of a vinyl cutting & digitising sytem and the cost of a font then was $500 each. That was in 1985 so 29 years later I'm guessing that would be closer to over $2,000 in todays money. That is for ONE font. The only people who could afford to purchase a system back then was already an established signcraftsman and they were critical of course of what they got for their money. They knew about kerning as they they had done all of this by hand and were taught from the bottom up. Today you can get thousands of free fonts, many of which are a rough version of an existing font but with a new name to avoid copyright. Spacing tables are lousy at best and some will place characters overlapping or oddball things like huge gaps between certain letters. There are still very well digitised and kerned fonts from reputable foundries and of course these are not free...........Except when they are downloaded form pirate sites or handed over free from one user to another.

Many "sign designers" these days are not much more than someone with a PC who makes perfectly ugly signs.
Top

I'm sure some people would put me in that category, I started after I had left the Royal Navy. Vinyl had been on the go for some time & people were using computers running windows 98 to produce graphics.
Sure there would still have been some people using the old Gerber system you described Graham but not many, never had to learn traditional signmaking skills with a brush either. I've got a steady hand which would help but not sure I have the flair & natural talent to use a brush.

You are quite right in what you say though, it is very easy to start up now & there isn't a huge outlay required either, especially with the price of the Chinese plotters some people have.
Top

The other matter that no one tells you about is to make sure that the face you are milling for text is true & level.
Slight warps in timber when using ball nose cutters at shallow depths will result in the lettering strokes changing in "pen-stroke" widths.
Solutions include facing off the surface with a rose-type cutter pre-text cutting or buy a floating head for your machine that will maintain a set depth in slightly uneven material.
I have done a fair amount of text in plywood which is notoriously uneven using a floating head system on my machine.
After initial headaches, the text process is now solved.
Note : the floating head I believe is also called a "depth regulator " attachment.
(See http://www.cnc-step.co.za/accessories-e ... hregulator to view an option.)