This post is for all the Design and Make enthusiasts out there!

Just a quick post to keep you up to date on what is new over at www.DesignandMake.com.

Welcome your holiday guests in style with a new "Merry Christmas" welcome sign.

Like most of our Hacks of the Week, you can customize it with different text or, in this case, hooks for stockings or wet mittens.

If the included Assembled Layout is not just quite right, you have all you need to make it your own. Recreate the bits you like using the single models included in the hack and then add in some of your own!

Remember, all the models in this pack can be cut as individual models or combined with other models in your library.

Browse all of our Hack of the Week Model Projects... https://store.designandmake.com/search/ ... ype=search

Check out what other Design and Make users have been up to - http://designandmakeit.com/index.php/ca ... mer-focus/ 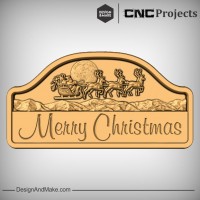 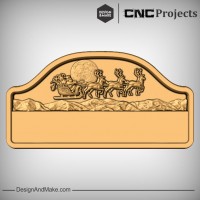 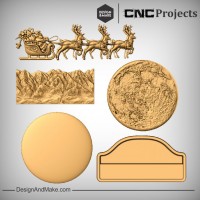 Todd,
Must be particularly dense this morning, but can not seem to find that particular Moon as an individual model

Got a link Please?
scott
"One accurate measurement is worth a thousand expert opinions"

Here you go... they are also listed on the Hack of the Week page in the store -
https://store.designandmake.com/shop/product/18586

Models and Projects Used to make this hack:

Moon - Sun or Moon from the Deep In The Woods model project
- https://store.designandmake.com/shop/product/16

Mountains - Mountains No.1 from the Deep In The Woods model project
- https://store.designandmake.com/shop/product/16

Thanks Todd, but only looking for the Full Moon Texture 1 model by itself because I like the detail for some possible Tiny projects in the house.
Only finding "Full Moon" in the store.

I've only bought a single model since the new set up,and don't want the whole project.
scott
"One accurate measurement is worth a thousand expert opinions"

The Moon Texture is exclusively available in the Deep in the Wilds model project. It was actually a last minute addition to the project and was never considered to be sold as a stand-alone model. It is just a texture to be added to the Sun or Moon model... so we felt that you would need the other model to use it properly.

Thanks Very much Todd!!
LOVE the detail!!
It could just be applied to dome..Correct?
Or would the Sun/Moon shape be included?
Sorry for being a Monday PITA:)

If it were to be sold as a single model the dome would need to be already part of the model.

As it is in the "Deep in the Wilds" model project or in this Hack of the Week, it is a 2 part thing.

Kinda felt it would give you a few more options when making your own layout with the models. You might not use Santa or the moon texture and add in an eagle for a very nice wilderness themed welcome sign or cottage sign. Maybe even merge in a few treetops over the mountains... yeah, yeah I like that!!! Sorry got excited there...

That's the beauty of our Hacks of the Week model projects by including the single models we used to create the included assembled layout... you can make your own version or build on what we have done. Also if you happen to have the models already in your collection, or similar models, you can use the hack as inspiration for your own layout.

Thanks for explaining Todd!
I was just thinking it would go well as a Tiny Bloodwood or Quilted Tree ornament to go with a couple Christmas presents.
IF I did one of your Hacks...you'd need a magnifying glass to see the detail

Please include the 2 part...One interested buyer!
Merry Christmas all

How small could that first picture "Customized Assembled Layout" be cut to be readable as a Christmas tree ornament?
I was thinking maybe it would have to be about 3" long to hang on the tree.

Do you think it would be readable?

Hey Mark.....No idea what size Todd's preview was, so can't say how it would scale....THAT would be a nice challenge though

I CAN give some comparisons to help visualize though.
Cutting another Heart right now for my Mom as she liked my Dad's so much.
The "I Love You" face of the 3" Heart from D&M was "Vladimir Script" with the "Bold" option checked at .45" font height cut
with an Onsrud 30 degree Engraving bit with a .005"flat(37-21)(Ballew Saw has best price and shipping was as fast as Drillman1).

The "Names" were the same bit and it was "Monotype Corsiva" "Bold" option checked at .2" font height and Very legible.

The "Owl" and my signature on 1.75" blocks were cut with the same bit, BUT described as a VBit to get the .98" "Owl" to have eyeballs..and deeper Script at .15" "Vladimir Script" "Bold".
Preview will NOT be 100% accurate...things like the antlers will be .005" narrower for instance, and preview will show Fuzzy because it thinks it's a true point(which disappears when cut), and anything smaller than .005" will be overcut and disappear like tiny Moon dots....everything else will be exaggerated deeper and be more visible.

Afraid even with the engraving bit described as a VBit....Santa and Reindeer May lose their eyeballs, and Moon a lot of detail, BUT Hard Telling..Not Knowing.
You would definitely know what it was though!
Hard,dense,close pored wood would be a must I think?
Be a blast to try...and certainly something special!!

Hope this helps visualize it.
Gotta get back to cutting or it will be a long day:)
scott
"One accurate measurement is worth a thousand expert opinions"

Todd(or anyone who has purchased this),
If the Hack is done as in the first pic, and then rescaled to 3" width like Mark asked....What is the X,Y size of Santa and Reindeer? scott
Oh....And the proportionally resized model height?
(Sorry to be a pain...but do like Tiny stuff:)
"One accurate measurement is worth a thousand expert opinions"

Scott, Thanks for the interest. I figured if anyone could do it it would be you.

I'm running out of time for Christmas stuff so I probably won't try it this year.

ALWAYS interested in how small you can go Mark !!

Besides...I may give Todd some money for his "Moon"

Know exactly what you mean about it getting close!
Cut a "Heart" for my Dad 5 weeks ago out of River Red Gum my friend from Oz brought me in his suitcase when he and his wife visited 2 years ago.
When Mom saw it....You could just SEE the wistfulness in her face

ESPECIALLY when I told her I didn't have anymore of that wood(going to Heck for THAT fib:)

Cut without locator pins, so I could possibly use Scrap, and cut hers yesterday and scrambling to finish sand and start oiling.
JUST thought about jigging up the Scrap again, and running a Profile with a 1/16" TBN on both sides and using them to hang a Swarovsky crystal for an extra present for a windowsill?
Be easy enough to jig up with my set up. My fences weren't as accurate as I wished because humidity changed 30% since last time I checked

BUT with oil drying time....be a close cut thing.....finish sanding the Heart FIRST!

too many ideas...not enough Time.
TIME is FLYING:)
scott
"One accurate measurement is worth a thousand expert opinions"