Hoping I put this in the right section and it's not something that's already been addressed. I searched around and could not find a previous thread on the topic and it seemed the feature requests were going into the forum.

Some CNCs that had a laser added after the fact may not have native support for changing laser power dynamically as travel speed changed on accel/decel. One example being my LinuxCNC based router. The result is darker lines and burning where the starts and stops are happening. This applies to Raster Vector Fills and also Photo Engrave toolpaths. One work around is to run the feedrate at a slow enough speed that the effect is "feathered in" and not very noticeable, but this harms productivity quite a bit. For instance, I can get a quality result on vector fills at 40ipm and reducing power to 50%. But otherwise I could run 100% power and 180ipm. Total job time is more than 3x longer.

A robust solution to this is to add overscan G1 motion on the toolpath -- blank spots of commanded motion after the last burn segment, where laser power has been turned off. This area "absorbs" the accel/decel area. In other laser software, this distance can be programmed as a percentage of the feed rate, and this solution works very well. Attach picture shows some tests of what the same graphic looks like lasered with and without overburn (done from other laser software).

While other laser software already has this feature, I'd much rather use Vectric for all my laser work as well. Your design tools are far more robust, complete, and intuitive, and it would be nice to be able to use the same tool for all my subtractive router work, laser cutting and engraving, so as to benefit from saved templates and layouts and such.

And by the way, great work on this module in general, and on the post processor customization system. It was trivial to get my LinuxCNC custom laser working with VCarve with the PostP system. Thanks for all the hard work! 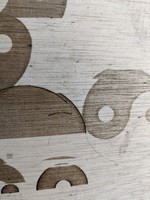 With something like this contacting Vectric directly is the best option: support@vectric.com
Top

Thanks so much. I will do that.
Top

Did you get a response from support about this, please?

Laser is my next go to, and although I've heard great things about other software, like you I'd rather stick with Vectric.

Thank you
Be wary of taking the advice of someone who thinks he knows what he's doing, and don't listen to me!
Top
Post Reply
4 posts • Page 1 of 1