I recently managed to get my Vectric Vcarve Pro 10.5 laser module working with my UCCNC Stepcraft DL445 after having some help from ...
https://www.forum.cncdrive.com/viewtopi ... 362#p22362

This was a big relief and works extremely well...
Also Chris Rogers of Vectric kindly leant a hand explaining where to put my pps.
So I kicked it off for the first time today and using UCCNC Laser Profile with my Stepcraft DL445 stared to cut.

So a couple of strange things happened. All I was cutting was a 25x18mm oval through some Sycamore veneer. Usually takes 2 passes.

So what happened was that I loaded the *.tap file into my UCCNC Laser Profile, then when I ran it it actually triggered the first cut from the centre datum point instead of the start node of the vector, and as well as that it turned off after only one pass so did the subsequent 3 passes without triggering. I noticed that when it passed the start node point the laser blinked but did stay on and continue the cut for the next 3 passes.
So I then created a square using the native square drawing tool and set it to 4 passes. I did the same process and it cut all 4 passes from the start to end nodes perfectly. I then did the same with a circle and also perfect.
So I drew another oval using the oval tool and the same error happened. I will only cut one pass then blips the laser when it gets to the end point continues the other 3 passes but doesn't trigger the laser.
I then created a square with a new oval inside and set to 2 passes. It proceeded to cut 1 pass for the Oval and failed to trigger the laser on the second pass and then correctly cut 2 passes for the square with the laser working on both passes.
As you can see in my pictures the first error shows when just having an Oval 25x18mm then in the second picture you can see it cut out the square perfectly but not the Oval.
So the error only seems to happen with Ovals not squares or circles. 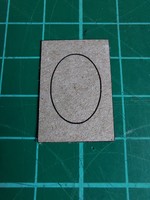 Re: Laser Module only doing one pass Oval? Possible bug...

I will come back you on this on email via the ticket you raised with us.

Re: Laser Module only doing one pass Oval? Possible bug...

Did you check the box to project it onto a 3d model?

I'd reported that bug a long time ago and don't think it was ever fixed. It would only fire the laser on the first pass with it checked.
Gary Mitchell
Kentucky, USA
Top
Post Reply
3 posts • Page 1 of 1