Bharris wrote: ↑
Tue Feb 16, 2016 8:48 pm
...Unfortunately, when I apply a VCarve toolpath to a selection of overlapping shapes, it creates a group of anomalous paths that ruin the cut (See attached). From what I understand, this is simply how VCarve path calculation works and is to be expected. Drill paths, on the other hand, do not suffer this problem....

This gadget takes a selection of circles and a choosen v-bit, engraving, ball end, or tapered ball end bit. It creates a drlling toolpath using the bit and selection the result of which is a conical or dish shaped depression to fill the circle.

The circles can come from a half-tone creation program such as the one for Windows written by https://jasondorie.com/page_cnc.html Jason Dorie. It also works well with StippleGen2 from https://www.evilmadscientist.com/2012/stipplegen2/ Evil Mad Scientist Laboratories. A similar result can be obtained from the "V-Carve / Engraving Toolpath" in the Vectric software But that toolpath does not handle overlapping circles as mentioned above.

Note: because the Vectric gadget API seems to have no way of obtaining the side angle of an engraving or tapered ball nose bit you will need to enter that manually if you use one of those bits. Take note of the side angle when you select your bit and enter it in the field below the "Bit" button. If you are using a v-bit or ball end bit you can leave the field at 0.

The "Use Peck Drilling" has two choices: 'Peck' and 'Plunge'. Peck will use the bit's pass depth to peck down in steps. It will retract to the last cut depth rather than the top of the material to allow chips to clear. Plunge will step the bit down the full depth to be cut in one go.

The "Starting Depth" field will normally be left at 0. If you are stippling the bottom of a dish or box you can enter the depth of your pocket here. As with other toolpaths when cutting the job it is up to you to make sure that material had been removed. 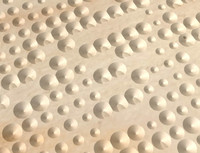 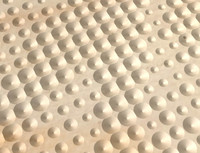 
This gadget works in Aspire and VCarve Pro versions 9 to 11. I have not tried it in Cut2D Pro but gadgets are claimed to work in that program.

To install the gadget into Aspire/VCarve Pro choose on of the following methods:
If you use the latter option you will need to restart Aspire/VCarve to see the new gadget on the Gadget menu.

Some changes that might be made for the gadget:
—Steven

To use this gadget just follow these simple steps: If there are circles that are too large an error message with the error count will be displayed.

Because the forum software doesn't allow attachments with ".vgadget" extension the file is uploaded as "Stipple_Drill v1_15.zip". Installation instructions are the same for both new installation or in upgrading a previous version:

Instructions for Aspire and VCarve Pro versions greater than v8.x
VCarve/Aspire should give you a pop-up saying the gadget was installed and you should see "Stipple Drilling" in the Gadgets menu.

Note: after downloading the ZIP file do not extract it but continue on to the rename operation (unless you are running Aspire v4.5 or VCarve v7.x in which you need to manually unzip and move the folder to where your gadgets are stored).

This gadget has been tested to work in Aspire v4.5 and versions 9 to 11 and in VCarve Pro versions 7 to 11.

I have not tried it in version 10.x but as that version uses the same toolpath selection as v11.x it should work. Choose a tool and if you get no errors it should work.