Discussion regarding this gadget (bugs, plaudits, suggestions, etc.) can be found at this thread: viewtopic.php?p=282242 . I'd like this thread to be for new version announcements only.


I have wanted to make some inlays with my ShopBot but ... the resulting inlay would have rounded edges.

I remembered that people who do intarsia will often angle their blade and rotate the piece as they cut to make up for the thickness of the blade. The resulting pieces fit perfectly even though they fit on a bevel. Could one achieve a similar effect using v-bits? — Paul Zank (b. 1948– d. 2019) and Damian Durrant. "Procedure for designing and machining v-inlay projects", 2006. (A simple way to make inlays viewtopic.php?p=4146)

Cutting the inlay plug (a.k.a male) for tapered inlays using the Paul Zank method can be a challenge for lesser powered CNC machines. The method sets the starting depth of a "V-Carve / Engraving" (V-Carve) toolpath equal to the thickness of material to inlay into a base socket (a.k.a. female). This combined with the step down for carving v-bit or the area clearance square-end cutter could mean an initial cut that well exceeds the capabilities of the machine's router / spindle.

This limitation might prevent people with such machines from realizing a tapered inlay project.

A method to overcome the depth problem is to create a number of "roughing" V-Carve paths to remove the material above the inlay starting depth. For example if the amount of material to inlay into the base is 0.25 inches and the stepdown for the bits is 0.0625" then four roughing toolpaths would be needed. Creating those toolpaths manually for each inlay project can be a burden.

To use this gadget just follow these simple steps:

I suppose a screenshot of the gadget in operation should have been included. Sorry. 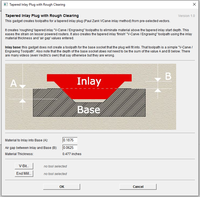 I have attempted to install this gadget. I downloaded it and renamed the extension to.vgadget. I have installed it and it says its ready to use but is not showing in the list under gadgets ?

When choosing the inlay vcarve bit, the tool selection list is filtered to only show v-bits. In my case, I am using the Amana 45611-k (15 deg bit) which is technically classified as an engraving bit. Would you be able to adjust the tool list filter to include both types?
Top

That could be done. Will look at it this evening.

Since the tip is only 5/1000 of an inch you easily call it a v-bit and no one else would know.
Top

I have already modified my local version to handle it - I am happy to upload a version 1.1 if you are ok with that...
Top

Version 1.3 gadget update:
See the first post in this thread for installation instructions.

Version 1.4 gadget update:
I was putting together a multiple material project and wanted all inlay plug cutting toolpaths in one file. So, I needed to give them different names. I could have renamed each individually or I could get the gadget to do it for me. I chose the latter.

Because the forum software doesn't allow attachments with ".vgadget" extension the file is uploaded as "Tapered_Inlay v1_4.zip". Installation instructions are the same for both new installation or in upgrading a previous version:
VCarve/Aspire should give you a pop-up saying the gadget was installed and you should see "Tapered Inlay" in the Gadgets menu.

Note: after downloading the ZIP file do not extract it but continue on to the rename operation.

I have not tried it in version 10.x but as that version uses the same toolpath selection as v11.x it should work. I have also not tested it in a version less than v9.x but I suspect it might work. Choose a tool and if you get no errors it should work.

adze_cnc wrote: ↑
Thu Jun 02, 2022 11:50 pm
I have not tried it in version 10.x but as that version uses the same toolpath selection as v11.x it should work. I have also not tested it in a version less than v9.x but I suspect it might work. Choose a tool and if you get no errors it should work.

I'm still in the past using V4.5 Aspire and thought I'd try and install the gadget.
I renamed the file and placed it in the gadget file location of all my other gadgets.
When I click on the Tapered Inlay file I get this error message.

All my other installed gadgets don't seem to have the vgadget file ext.
So am I plum out of luck trying to install it in V4.5?
Top

In your case perhaps you actually do need to keep the extension as .zip. And unzip it. The result will be a folder named: Tapered_Inlay

That directory with its 5 files (two .txt; and one each of .lua, .htm, and .jpg) could be placed where your other gadgets are. Then you would need to restart Aspire 4.5 and with hope it would be available.

Ok, I now have the gadget appearing in the Aspire gadget list.
I select a closed vector and open the gadget and now get this error message.

I guess that I always knew it would be a long-shot that it would run “out of the box” on Aspire v4.5. I wish I could find a PDF of the gadget programming documentation of that era.

I’ll see if I have some of Paul Rowntree’s gadgets (or others posted here) that were created for Aspire v4.5 and compare them with this.
Top