Since the price of wood is higher than pork belly futures on Christmas Eve, I decided to try some edge lit acrylic carvings. made this for a friend of mine for a Mother's Day gift. 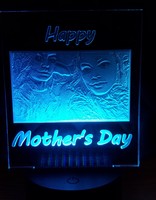 Made this one for her work. She sells cars at used car lot. 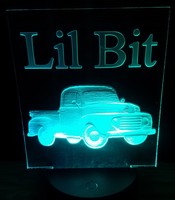 How thick is the acrylic?
Top

Sorry for the late reply. These are 1/8 inch acrylic.
Top

What were your engraving parameters? I'm hoping to make some cute thing for my granddaughter's birthday.
Top

The lettering was 60 deg Vbit at .02 depth using the quick engraving toolpath.

The image for the mother and daughter pic was done with a 1/32 tapered ball nose bit and came out to about .043 depth. I reversed the image and ran it through https://3dp.rocks/lithophane/ to create an stl file, then imported as model in VCarve Desktop. Used the 3D finishing toolpath to carve that part.

The one with the truck was a model from Design and Make, and cut with same 1/32 bit to get as much detail as possible since it was shallow material.
Top

I purchased the bases and acrylic from Amazon. I haven't made a base from scratch yet, but hoping to in the near future for a 18" X 24" project I will be making.