And Then I Got Crazy!

And Then I Got Crazy!

Wanted to organize my power carving bits/tools so I decided to build a nice case. Fine and dandy. For shop stuff I usually just find some pine without knots and build what I need. Well, I was looking at some walnut I got about 20 years ago from a guy named Merlin (not the wizard, different guy) up in Manitowoc, Wi. Bought the whole 32 inch X 10 foot log sawn up for $125. It has been drying out ever since. I have used some of it over the years but always for stuff that went to someone else. To heck with it, going to make something for myself!

Then I thought hmmm, might be a nice idea to put something on it, then I got fooling around with V carving, then I went completely NUTZ: 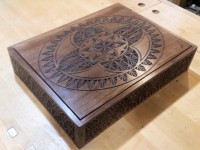 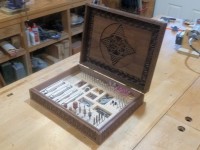 The entire box was produced on the cnc machine after I prepped the lumber to thickness/width/length. The finger joints are 5/32 thick done on the cnc. Hinge pockets, dadoes, the whole shebang. All of the pine blocks on the inside were cut on the cnc too.

I got a lot of help on this one. Bought some of those incredibly cheap chinese 90 degree V cutters. Checked them out using the test program that I found in this forum, they were spot on. Lot of good tips on v-carving that I paid attention to.

I am going to make another one of these but not exactly the same for my brother in law (he is an amazing power/hand tool carver). In the following post I am including the vcarve designs for most of this project, but not the project itself, in eps format. I will comment in that post about what they are and where they came from. Stay tuned (as ScottP would say)....
"If you see a good fight, get in it." Dr. Vernon Jones
Top

Here are the designs for vcarving:

Of course these are not "original designs". The shapes date back hundreds of years. I did not scan or trace them out so the geometry is very good. They were hand drawn in Corel and exported as eps files.

You will note that some of them are already offset. I recommend that you offset them back and then create the offset you need for your project. On the box I kept the cutouts about .040 apart so the edges did not become too fragile.

One of the challenges in this project was figuring out to have the pattern align once the box was cut in half to form a bottom and top. That took a bit of thinking. When I thought I had it figured out I ran a test piece to double check and all was good. I used a .062 X 7 1/2 saw blade from Freud that is designed for cutting pressure treated wood. I routed a .062 in all the pieces before assemble so I could be sure everything was lined up correctly when I got to the table saw.

Enjoy!
"If you see a good fight, get in it." Dr. Vernon Jones
Top

The finger joints are 5/32 thick done on the cnc.

Very nice!
- Randall Newcomb
10 fingers in, 10 fingers out
another good day in the shop
Top

"That’s the fanciest tool accessory box I’ve ever seen!"
And THAT is an UNDERSTATEMENT!!!

GLAD I'm not the only one that get's sucked into a job Ted!!
(I got to admit...I think you topped me)

FOUR handpieces IN the box.....LOTS of room to take a handpiece or two out, and add accessories:)
HOPE that idea isn't contagious!!

Well Done Ted!!!
(let your Brother-in-Law drool a bit before making him one.....Maybe like Christmas:)
scott
"Some would find fault with the morning red, if they ever got up early enough."
HDT
Top

Ted, I am afraid that is certifiably “crazy”!

But also beyond spectacular!
Congrats!
Sharing the story and how you did it was great.
And sharing the shape files is way over the top!
Thank you!
I am glad you are keeping that one, you more than earned it!
Maker of sawdust
Top

You have proven that crazy can be fun!
Now you have started my little brain to thinking...
Thank you for the design files Ted.
Bob
"Be accurate."
W. Tell
Top

Nice job, Ted. The only thing crazy about it is that it probably took a lot of work.
Steve
Top

SteveNelson46 wrote:Nice job, Ted. The only thing crazy about it is that it probably took a lot of work.

Yes and no. The hardest part was deciding what I wanted to do. At first I was going to use 3D models. But I did not like that. So the chip carving look came to mind and then it took a while for some inspiration. Wayne Barton's stuff got me going in the direction I liked. Then it was a matter of drawing up the shapes, sort of fussy work. I use Corel so the Smart Fill tool makes it easy to get closed shapes from lines that cross over each other.

The trickiest part was providing for the cut line to remove the top from the bottom. It is not possible to just split them, pull them apart and then draw small connector lines. That does not work with curved lines at all. So the trick was to create a copy of the design split the top half using the lower edge of the cut line and vice versa for the bottom half. Then moving them apart the width of the cut line and welding it all together. Worked out perfectly. Figuring THAT out took a while.

Also needed to build a fixture to do the hinge pockets. The way I did that was to secure a tall rail on the machine then machine it to a specific width. Clamp the top and bottom halves to it and then layout the mortises for the hinges accounting for the thickness of the rail.

The sides/front were pretty easy. I use vises on the machine. The vises have sacrificial jaws so I milled a step into them which gave me a perfectly straight surface and a reference for the back of the pieces to ensure they were flat to the machine without having to surface them.

The finger joints were a bit testy. That had to do with the bit size being a bit off and my not laying it out so that adjusting the bit size would not screw things up.

All in all I spent the vast majority of my time getting the design where I wanted it. The actual machining went smoothly all things considered.
"If you see a good fight, get in it." Dr. Vernon Jones
Top

For your next tool-box, consider inlaying a reproduction of the Sistine Chapel ceiling art on the cover. Maybe one modification...God hands over a carbide-tipped V-bit to Adam....ha ha. Seriously, that is an outstanding tool-box, Ted !
Top

BTW Ted,
Is it just the pics, or does that Walnut have some of those purplish overtones so often seen in air dried...and virtually Never in kiln dried?
Must be a beautiful stash!

What was the finish on the piece?

Now you just need a good soft brush that will keep it clean and buffed(this is my favorite);
https://www.amazon.com/dp/B00B73NWB8/re ... UTF8&psc=1
Works very well with all the "Dust Catchers" in my house:)

Once again Congrats!
scott
"Some would find fault with the morning red, if they ever got up early enough."
HDT
Top

scottp55 wrote:BTW Ted,
Is it just the pics, or does that Walnut have some of those purplish overtones so often seen in air dried...and virtually Never in kiln dried?
Must be a beautiful stash!

What was the finish on the piece?

Now you just need a good soft brush that will keep it clean and buffed(this is my favorite);
https://www.amazon.com/dp/B00B73NWB8/re ... UTF8&psc=1
Works very well with all the "Dust Catchers" in my house:)

Honestly Scott? I never see those purplish tones people talk about in any walnut. So I do not have a clue if they are there or not.

Finish is just shellac and wax. Sanding sealer first, light scuffing. Two coats of shellac with super fine steel wool in between. Then the wax. I am a fan of shellac, durable and easy to repair or remove.

Keeping it clean is a whole different ball of wax, LOL. I run dust collection in my shop but this place would never pass a white glove inspection lemme tell ya.

There were some primo pieces in that log. At some point a branch had been cut off and the tree completely overgrew it forming some incredible figure. Those pieces went into several jewelry boxes and a couple of humidors. Funny part of the story was when Merlin and I were loading the wood on the truck he wanted to knock off some money because those pieces were not nice and straight grained. He insisted, so one of the jewelry boxes went to his wife. BTW, I found that wood because in Manitowoc a person needed to take their garbage to the dump, so everytime I went to the dump I took a different route. I spotted those logs and stopped to ask him about them. His buddy had a portable saw mill so it worked out all around.
"If you see a good fight, get in it." Dr. Vernon Jones
Top

VERY nice work. The designs remind me of my chip carving days.
Top

That is exactly what they are RT. Like I said above, I would not lay any claim to originality for this carving. The arches have been used in architecture pretty much forever. About the time someone comes up with an "original" design they will find it in a book or on a building somewhere.

BUT! I am in the process of upgrading my Corel and there are some very interesting tools that would definitely help designing things like this. Just have to sort through it while I am on the trial. One of the big ones is a "symmetry" tool.
"If you see a good fight, get in it." Dr. Vernon Jones
Top

Maybe one modification...God hands over a carbide-tipped V-bit to Adam

A variation on this? 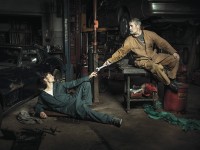 You can see more like that here: Auto Mechanics Recreate Renaissance Paintings
- Randall Newcomb
10 fingers in, 10 fingers out
another good day in the shop
Top
Post Reply
41 posts