I don't normally post in the gallery but thought I had better put this one in as I had already asked some questions about cutting with or against the grain. This is taken from a vectric project by Michael. It is slightly larger than the original & the dome is a little flatter, that was actually an error, I thought I had to reduce the height of the dome because I was adding a component to it which I didn't have to do.
Front & back are Yew which I had never machined before but was very pleased with results, there are a few cracks/splits which I couldn't avoid. I picked up a few bits of yew at a good price because of this damage, with some projects I think they actually help to enhance the finished item (give it a bit of character) but don't think they really help in this case.
The 2 centre pieces are beech, I wanted a contrasting colour & had a bit of beech that happened to be the right sort of size & thickness, quite often I will use hornbeam or lime if I want a light coloured wood but I felt that this bit of beech was light enough. front & back are finished with Danish oil & the whole thing coated with clear varnish once glued together. I didn't want to coat the beech with Danish oil as it darkens the wood & I wanted to try & keep the contrast.

Just to give an idea how much Danish oil can darken a wood this picture is of a holder I made from the same piece of beech as the vase centres, the holder was given 3 coats of Danish oil as a finish.

That looks really nice, would you mind sharing the file? If not I understand but I do like your's alot. If you can but want to leave out the 3d file, that's fine, I have plenty to add to it. Thanks for sharing, I have to get better at that myself and will starting doing so soon.

Joe, its one of the vectric projects by Michael Tyler, you can find it here

All I did was increased the size a little to fit the board width I had & added a 3d model instead of v carving & doing the inlay. The model is one of the ones that come with VCP8, all I did was place it & enlarge it to suit the front of the vase

Came out NICE Martin:)
scott
"One accurate measurement is worth a thousand expert opinions"

I've looked at that vase just need a round to it...
John
Maker of Chips
Top

Been wanting to do one of those. Yours looks great, love it. Thank you for sharing.
Top

Thanks for the info, I'll download it from Vectric and give it a shot soon.

Thanks for the comments People, I do plan to have a go at the original inlay project but with a different vcarve design to the original. Having decided to use Yew for the back & front of this one I felt it would look better overall with a carved model rather than an inlay. With the colouring in the wood & an inlay I think there would have been to much going on

I have some Oak which is fairly plain so will use that for an inlay vase, just need to sort out a suitable design, probably keep the same Celtic theme on it though.

Martin, that came out beautifully! I love the contrasting wood and the weaved model on the face of the vase. Very, very nice!
Michael Tyler

Martin,
Good job, like the Yew!
I may make a couple too.. thanks
Top

I seem to have got stuck on a theme here, did this earlier today but not cut yet 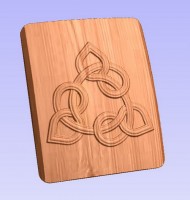 Nice design to be stuck on.

What did you use to coat the inside, assuming it's meant to hold liquid.
John
Maker of Chips
Top

I doubt if these are really meant to hold a liquid but I did coat the inside. What I did was to glue the 2 centre pieces together first, then I taped all the contact points on front, back & centre part to prevent them being covered. The inside of all parts were coated the same as the outside so danish oil for front & back & clear varnish for centre. Once the parts were dry I removed the tape & did the final glue up. I did use an exterior wood glue so in theory it should hold water

If I were to do one that was capable of holding water I would probably use the same process to ensure the whole of the inside was coated properly but use a more suitable coating.
Top
Post Reply
14 posts • Page 1 of 1