In the February 2016 issue of Woodworker's Journal, Sandor Nagyszalanczy published his version of an antique music box.
I really liked it, so here's my version of his version: 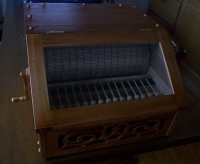 I built it, my wife programmed it.

Nice, thanks for posting.
Eric
The WoodEraser

Great job! Definitely on my list to do now. Thanks for sharing.
Top

Interesting sound! I'll have to get a copy of that issue (found it on Rockler's website)! Thanks for the heads-up and for sharing your interpretation of the project!

Bob, You did a beautiful job on that "Super Cool" project! (Why didn't I think of that?!)

Bob...
Nice job! This is a great example of a full circle journey. CNC mfgr of an NC product. And yes, why didn't Michael T. think of that????

I would like to thank all of you for your kind comments. Using a cnc opens the door to a lot of projects that I would not ordinarily make.
And Michael, your projects continue to inspire and motivate me.
In fact, all who share their work and comments on this forum, provide tons of information and ideas that help in many unexpected ways.
Thank you,
Bob
hammer...nails...stuff
Top

Bob, thanks for posting. I've attached a link to the WWJ web site that has a video showing how the drum is made.
http://www.woodworkersjournal.com/makin ... music-box/

I should mention that I included two more disks internally in the drum. I did this to strengthen the slats, since I would be doing a lot of removal and insertion of the pins when changing music.
Bob
hammer...nails...stuff
Top

Yet another great project from you Bob, keep up the good work

Well done, Bob. Took a lot of talent and patience to build that music box.

Yes, Bob great job. You inspired me to make one too. Hope you don't mind me posting it along with yours.

Now for some more music!

Have a great day!
… Rod
Top

I just ordered the magazine.

Thanks for posting that.
Imagine the Possibilities of a Creative mind

Nice job Rod,
What's the first tune?
I really like the lights, and 3D, and hammer bouncer, and the rest of the mods.
Bob
hammer...nails...stuff
Top

I programed Heart and Soul from the downloadable pin map. I want to transpose some other songs and I'm seeking some help for that.

I decided to add the LED lights. I used LED hardware I had on hand. For wood we have learned not to rely on the self-adhesive on the LED strip. I mark the area to apply the light strip and use a Q-tip to dab a small dots of Gorilla glue about ever inch. Then I applied the LED light strip with a couple hobby size clamps near the ends of the strip. For the music box I cut a LED strip to about 16 inches long and placed it is about one inch in from the front edge. Most strips can be cut about every two inches.

2. Power Supply - For indoor LED light applications less than 30 inches I like to use a 12w power supply like these.

3. LED light strip - I used a piece of water proof LED strip for this project because I had some left over from other projects.
If you haven't worked with LED strips before the water proof type is a little harder to make custom connections. After testing the connection I apply some Gorilla glue directly to the connector. Be sure you get extra connectors. I used the pig tail type of LED connector and solder spliced a two pin connector to it so you can unplug the LED strip when removing the top of the music box.

Have a great day!