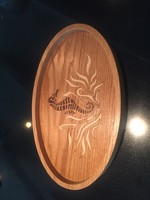 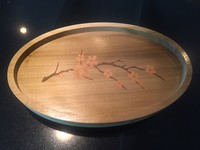 Both are excellent Lee!
You've really got it down pat!!

Very nice
May I ask what angle is your Vbit and the depth of cut for the female.
Thanks
Ron
Top

Thanks for sharing...
John
Maker of Chips
Top

That came out really nice. The piece is beautiful.
Top

Awesome !! they are both beautiful pieces.

Two beautiful pieces, and a nice tight fit. How did you sand off the male inlay, and how much was left to sand off ?

Thanks for the kind words, Dave. As you rightly surmise, Zank inlays on the bottom of a tray do not allow for waste-backing to be removed in the usual way, i.e., with a band saw.

About a year ago, inspired by watching a video of someone doing wood sculpture, I started doing the waste-backing removal step on all of my Zank Inlay projects with a hand-held angle grinder fitted with a 36-grit carborundum grinding wheel.

The angle grinder is cheap (Harbor Freight Tools, about $20) and the carborundum wheels are cheap and very long-lasting. This simple method allows the user to grind off waste-backing of any thickness like a hot knife through butter. Because it is hand-held, the grinder also allows the user to go fast during bulk removal and then exert fine control when he is close to the workpiece surface.

The high-speed angle grinder is an aggressive tool, which is why it is so quick, and so the operator does need to develop a feel for its use--too much aggression can certainly ruin a workpiece surface. But, using a flat depth = 0.1" on the male piece provides a nice margin of safety between the workpiece surface and the waste-backing.

As I said, I now use this method for waste-backing removal on all of my Zank projects--the 1"-deep trays are no problem, and the method is so fast and easy to control that I also use it for 'normal' projects that most folks might use a band saw on.

It is a little daunting to consider that one could spend a lot of time and effort constructing a Zank inlay project...only to possibly ruin it at the waste-backing removal step because of inexperience with the angle grinder tool. In retrospect, if I had been smarter, I might have worked harder to develop a touch for using the grinder on pieces of scrap wood--but the first two or three projects went without a hitch. It wasn't until the fourth project that I became overconfident and careless enough to ruin something. That failure was a good teacher, though, and now I always treat my angle grinder with the admiration and respect it is due.

A bit of follow-up. I went to YouTube and looked up the wood sculptor who uses an angle grinder to create his work. His name is David Knopp and the PBS segment linked below shows some of his unusual work. Might be worth a look for those interested in the unusual.

Thank you Lee. Very informative. I would imagine it would take a gentle touch when getting close, and not sure these old shaky hands could handle it. I did an inlay last week, but was easy to sand off the extra with a belt sander. Thanks again.