The last pass allowance would be measured perpendicularly to the sloped face cut by the v-bit. It would behave similarly to the "Do separate last pass" in the "Profile Toolpath". 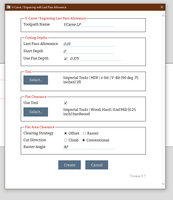 1. I don't think diagrams are necessary. But see my last paragraph.

2.,3. One should not require the user to edit toolpaths to make desired changes. One could offer a "Show advanced features" check box to provide them. (But make it a little more obvious than the Vectric programs do)

4. You could display the units being used for reference with check boxes to switch. I don't think that feature is necessary, but it might be convenient for some. I don't think it would be confusing.

Will the gadget permit use of more than one clearance tool, like the Vectric toolpaths do?

Can the gadget offer the option for a start depth with no cutting above the start depth? For when the VCarve is done in a pocket previously cut.

Something I really like in programs or gadgets: A popup box that further explains what is needed in an entry box when the cursor rests on the entry box. But that is a "like" and certainly not a requirement.
Good judgement comes from experience.
Experience comes from bad judgement.
Top

1. Personally I would have said not but there have been posts on other threads recently where posters have said better diagrams in the Vectric Help would have helped them.

2. I think a gadget should offer as many settings as possible in the gadget itself rather than the user needing to edit the toolpath itself. My thinking is that most gadgets are doing what the software can already do but in a more convenient way.

3. See 2 but I can see that there is a rabbit hole of duplicating everything on the existing toolpath form. Perhaps a text section saying edit the toolpath to change the following values?

4. I don't think so but from other gadget posts a lot of people seem to struggle with the concept of seeing a numerical value without being told what the unit is.
Top

Thanks, guys, for the input.

Mike: the gadget calls for the V-Carve toolpath are limited to one v-bit and one end-mill. That is, the published specs in the PDF only list that. For that matter the v-bit must be a v-bit and not an engraving bit.

The start depth will be behave exactly as in the "real" V-Carve/Engraving toolpath. That is, it is up to you to make sure all the material from 0 to Start Depth is gone. e.g. You could carve something in the bottom of a tray.

I recently pointed Jim towards a method of having a fly-over tool-tip. So it's something I'll include here. One of the issues of presenting things on the screen is that the HTML display engine appears to be Internet Explorer version 7 (released in 2006). It was non-standard, limited, and "old" even when it was newly released.

Adrian: I might shelve the last pass speed for a future iteration. Adding 4 extra fields (2 for v-bit and 2 for end-mill) might be annoying.

My inital thought about including speed changes stems from the Profile Toolpath not having them and your observation that for that reason you generally create two toolpaths to overcome that.