I found a strange behavior that seems like an error in the math. I uploaded three pictures. Each have only one difference in how the ramps for the dovetail were done. I changed the stepover for the bit.

Stepover is 80%. See how the ramp is slightly under cut compared to the profile. Stepover is 50%. The ramp lines up with the profile. Stepover is 5%. See how the ramp is over cut compared to the profile. With the 80% and the 5% stepover, the parts don't fit together well; I have to use a hand file to make it work. I like the lower stepover values because it gives a smoother ramp, but the parts don't fit. The 50% stepover yields a good fit but the ramp is not as smooth as I'd like.

Again, all I changed each time running the gadget was the stepover for the tool. It seems to me like there is a math error within the gadget. What say you?
Top

A quick glance at the code shows that when calculating the number of "back and forth" passes it doesn't take into consideration that the last pass line must not be within "StepOver" of the vector. How to fix that is another matter. The calculation is for the variable "stripe_shift".
Top

I tried a work-around for this problem, but I think I uncovered another math problem.

The material thickness that I've been using is 1/4-inch. So, both the cut depth and the thickness were set to 1/4". The workaround was to set the thickness to .20-.24, forcing the gadget to not overcut the dovetail. 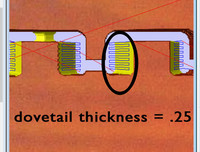 This shows the two cases overlaid. The gap at "A" is the desired effect of reducing the thickness setting in the gadget. The gap at "B" should not be there. I didn't change the cut depth, but the gadget acts as if I did.