I'd like to keep discussion here so that the gadget thread always has, as the last post, the most recent version of the gadget.

Some additional features I see needed for the gadget:
—Steven
Top

Hi Steven,
I have completed a very deep dive on the Zank toolpath method for making the plug toolpaths. I have found that it does not work as well as you may think.
Issues I found starts with the first toolpath start depth not being at 0. As per the video, the first pass is 3.5mm deep with 1mm bottom.
Each toolpath is calculated individually. Therefore, the clearing calculations don't stair step the waste material away from the upper portion of the toolpath.
This effects the v- bit side loading as deeper cuts.

This is what I used to build the Eazy Zank Gadget

Thanks. I had seen that video (viewtopic.php?p=264755#p264755). I came up with the same method that Stefan details before I saw the video. It works. The important part is that the "roughing" toolpath(s) must stop before the final toolpath's start depth (his start depth of 7mm and flat depth of 2mm). I detail that further in: viewtopic.php?p=282314#p282314

The important point is that we are preventing a square-end bit and a v-bit from plunging way deeper than the machine can handle by removing above what VCarve/Aspire thinks is not there. Also, that what we are doing can't be any worse than only creating the one toolpath.
Top

Discussion continued here from this question


ozymax wrote: ↑
Fri Jun 03, 2022 10:58 am
Ok, I now have the gadget appearing in the Aspire gadget list.
I select a closed vector and open the gadget and now get this error message.

Well, I have done a few things to see if I can figure this out.
All in all this should work in Aspire v4.5. I wonder:
The second can be tested by copying the following code:

Then go into Aspire and either create a new job or open an existing one. Then select Edit > Paste. A pop-up should appear with some build versions.
Top

Thanks for looking into this for us "Old version folk".
I'm not clear exactly where to post the new script. Is it to go in the registry and if so where exactly?
I can see the gadget in the registry list under the Aspire location, but not sure where or what to do with it.
The registry is not an area I've had much to do with and like to be sure of what I'm doing in there.
This is what I see. 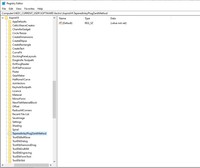 I guess I shouldn't have mentioned the registry and the lua script in the same post.

Thanks for the image showing the registry entry for the gadget. That and your initial error screenshot actually helps a great deal.

Nothing more needs to be done within the registry. It is also good to know that you can navigate to that entry if needed.

I had meant for the code snippet in the previous post to be run from within Aspire.
You should get a pop-up showing the version number info. A screen shot of that would be great.

Up to and including Windows 7 or maybe even Windows 8 you could run programs originally made for Windows 3.1 (originally released 1992). I've got programs on my Mac only a few years old that prevent me from upgrading to the latest OS version as they will become inoperable.

I run VCarve v9.519 but realized that if I posted any gadgets here people using v10 or or higher might want to run them too. So, I've had to come up with a way to ensure compatibility between the two. Difficult in that the way tools are selected and represented is different between the old and new versions.

But with a little thought and a little extra coding I've been able to make things compatible between pre-v10 and post v10.

Two other gadgets that I've written that might be of use sometime:

Here is the screen shot of the pop-up after I pasted the script.

Hope that means something to you.

One last thing (again copy and paste into Aspire):

I think I might have found a likely culprit. It's two simple typos that have been around since the beginning. They shouldn't cause a problem but they might.
Top

I get this message.

VCarve and Aspire 9+ are using Lua version 5.2. I've had a look at the differences between v5.1 and v5.2 and my typos may just be causing a problem.

Hmmmm, still no go.
I downloaded the new v1.45, unzipped the file and saved it in the gadget folder for Aspire 4.5.
I took some screen shots to see if they help. 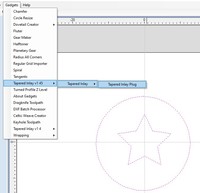 The error is the same as the original, so I'm thinking the typos were not the culprit.

It's going to be my "Moby Dick" moment to get this working under Aspre v4.5...

Something that you can try if you're up to editing the lua text file using "notepad".

and line number 275 (about 7 lines below the previous lines) change from:

These are the only places that "GetString" mentioned in the error message box are. We're just forcing them to be absolute text as a default instead of some computed variable.

You can move the "Tapered_Inlay" folder up to the level that the "Tapered Inlay v1_45" is to save a click in the menu. Something like this: 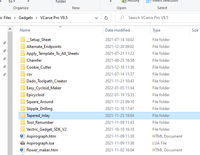 Ok "Moby", I think I have done this correctly.
Here is the adjusted lua file showing the 2x sections modified.
My file is showing that line 277 is the one that matches your previous posting above, not 275.
So going by the screen shot, have I done it correctly. The red circle is my cursor location to identify the line number. 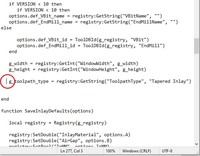 When I try the gadget in Aspire I now have a new message.