I finally got around to testing out Paul Rowntree's threading gadget(yes, I know it's only taken 2 years to get at it).

I had purchased the tooling shortly after he released the original gadget, but it was put on the back burner, and today I was in the shop(suppose to be quoting) but I spotted the tooling and thought I'd give it a try.

The instructions where pretty straight forward (as a metal machinist, I probably had a little edge on understanding the terms). The gadget worked fine, and I ran 3 test cuts of the male thread, before I had the settings where I wanted them. The female thread was straight forward, and worked fine, although I think my tool diameter could be adjusted by a few thousands of an inch.

All in all I am satisfied with the result. I guess this means I now owe Paul some money.

Unfortunately I can't seem to upload a pick of the threads. Sorry.
www.jmurphycnc.ca
Top

Hi John! I am happy to hear that the gadget worked for you. Considering all the help you have given me over the years, this one is on me! 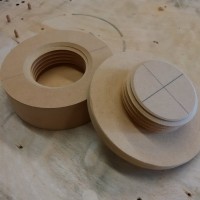