I'm having an issue with the box creator not compensating for the thickness of the bit it seems. 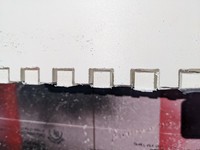 To be honest it looks as I would expect from the picture and I did a test box to your settings and it all measures correctly. Why are you expecting the gap between the tabs to be smaller? If the gaps were smaller the tabs from the other parts wouldn't fit.
Top

Now I'm looking at the picture on a big screen rather than on the phone I can see that the gaps do look bigger than I would expect. Given that they aren't that size when generated from the gadget I would suspect something outside of it.

Did you change the toolpath at all? The gadget works in an odd way that it uses two sets of vectors and only one is used for the toolpath. If you changed the toolpath to be inside/outside or used the wrong vectors I can see it creating a cut out like that.

If that's not it could you attach the actual file so the settings etc can be looked at?
Top

Different poster but by the sounds of it same dilemma: gaps too big
Top
Post Reply
4 posts • Page 1 of 1