I have a Laguna Swift 4x8 with the rotary A axis along Y. The CNC uses the RICHAUTO A18E controller. ASPIRE V10.x
The rotary cuts give unexpected results for radial cuts, spirals, anything where the A axis has to rotate during the cut. This is both the profile and pocket cuts.
models and cuts along the Y axis work ok, circles or curves work ok as well.
The wrapping gadget RASTOR works, will not work when RADIAL is used.
When I look at the GCODE, a spiral will generate two lines of code, start and finish. the cut will run the length of the Y axis but will not rotate during the cut.
for curves that work, the GCODE generates much smaller segmented code, that code seems to work though I can't tell if the rotary is turning between the segments or during the segment.

Laguna have been helpful but have had the issue for over a month. The trial code that is working is generated by other software, so far the post processor for ASPIRE is troublesome.

Anyone using the A18E (handheld controller) for rotary without issues?

Thanks in advance for your help
Chris H
Top

i work with richauto A18 controller on my machine with rotation axis.
Do you have the correct puls equivalence for the A axis ? on my machine its 111.113
Top

Did you solve this issue?

I'm using the RichAuto B18e for my Laguna IQ. I added the 4th axis on my own so I purchased the B18e controller (RichAuto recommendation) to replace the A11e, and a driver board to go along with the 4th axis hardware. So my machine is a true 4th axis, and not a "substitute X or Y" using the same driver board. Not that Vectric products can utilize true 4 axis yet. The radial pulses are set up correctly so that I get proper rotation (on my rotary it's 88.8888888889). I haven't used the 4th axis for a while and just this month started playing with it and the rounding gadget in vCarve v10. Previous to this I hadn't used the radial rounding gadget.

The issue I'm having sounds exactly like the one you are/were having so I thought I would reach out. Since the Swift and the IQ use the same PP, I thought whatever solution you might have found might apply to mine also.

When I run either the "optimized raster" or the "raster" tool paths everything works fine. But when I try the radial, it does the same thing you describe, ie: it goes to the start position, rotates -180 deg. and the moves along the Y axis to the finish position, then lifts the Z and returns to origin.
Looking at the G-code generated, I noticed that on both of the "raster" jobs, the A-axis never moves past -360 degrees. But on the "radial" tool path, the A-axis first goes to -180 deg. and the next line instructs the A-axis to move -540 deg.. When I substitute all of the -540 deg. moves with -360 deg. everything runs as it should (other than alternating direction on the A-axis) but of course only runs 1/2 half of the rounding because of the short move from -180 deg. to -360 deg.! So I substituted positive moves into the g-code and the result is the same like it's only recognizing degrees and not direction.

When I experimented a little, I can get good results when I use manual g-code like shown below. I used 7mm Y moves just to work each side of the origin.

I use the B18e HHC on an Axiom with 4th axis. The exact same thing was happening with radial toolpaths until Axiom provided this fix. Works like a champ since then. Can't say it will work for you or not but it's worth a shot.

Oh man, I got so excited this morning.....until I looked at my controller. It seems this might be a special firmware feature for Axiom handhelds?

I connected my controller to my computer and it opened up quite a few more settings but still no "RT Type".

And here are the rest of the screen captures since the forum only allows 6 images per post.

conifer wrote:And here are the rest of the screen captures since the forum only allows 6 images per post.

Sorry to hear this didn't work out for you. I was really hoping. I followed along your screen captures and my controller displays exactly the same info line by line as yours. Right after "GCODEFIRSTSAFE" is the "RTTYPE" parameter in my controller. Last item listed. Wish I could be more help but my cnc knowledge doesn't go much further than pressing "play".
Beautiful Things Function Better
Top

Thanks for that. It make me wonder though...

Could you check the firmware version on your controller for me?
Top

conifer wrote:Could you check the firmware version on your controller for me? 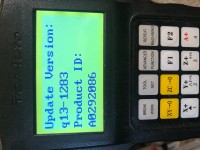 That would explain the difference. My firmware is q13-1337. I've sent an email to richauto, but haven't heard back. I may have to try to call and see if I can speak with someone.
Top

I have a copy of the .pkg file for the firmware that is on my HHC if that is something you would be interested in. Uncharted territory for me so have no idea if it would be compatible for your machine.
Beautiful Things Function Better
Top

If it doesn't work, I can always flash back my current firmware. I've got a backup of all of my parameters, as well as pictures of every screen.