I try to avoid the 30° included angle V-bits when I can. But lately, I have had a few jobs where I needed them to get the required detail. I have used ones from Kyocera, Precise Bits, and Centurion. I'm still not satisfied with the cut on these. As you can see in the pics, I get fuzzies that require a good bit of hand sanding. On the piece in the pics, I was using a climb cut with 2.0 IPS feed and 19000 rpm (PC Router).

It is interesting to note how clean the one side of the A frame detail is noted by the blue arrow. Then the opposite side with the red arrow is full of fuzzies. I assume that is due to the direction of cut on the end grain. On the blue arrow side, the endgrain is supported during the cut. Then on the red arrow side it is unsupported causing the fuzzies.

I guess one solution would be to re-cut the piece going in the opposite direction with a conventional cut. Each one of these takes about 30 minutes, so I would rather not double that time to an hour.

Has anyone else came up with a better strategy or a better bit? I have been looking at the Amana 30° V-bits. Anyone have experience with these? 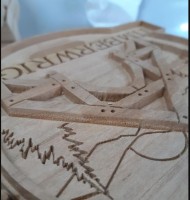 Re: 30° V-bit suggestions for solid wood?

I am no expert... but I have the same issue on many of my projects. I am pretty sure it isn't the tool design or brand. It's as you said. The direction of the cut to the grain. It is frustrating but I live with it. I dread it, but sometimes I stand there sanding, dremel and buffing projects that I wish that I didn't have to. On V bits, you are always stuck with 2 flutes. But I been told that on end mills, the less flutes the better. I have no way to compare that theory right now, but most of my end bits are only 2 flutes. Anyway, sorry I wasn't much help. Perhaps there are better tool brands than other. I am not sure. I don't get too picky on brand when I am looking for a particular tool.
Top
Post Reply
2 posts • Page 1 of 1