First - I am a believer in using quality cutters.

I see Chinese Tapered ball nose with TiAln coating for as low as $8.00 - free shipping.

Has anyone tried them.
Imagine the Possibilities of a Creative mind

I have not as yet but it certainly sounds enticing.
D-Dub
Dwayne
Dwilli
Top

Well I am going to try them,

If they perform anywhere near reasonable - it's worth it.
Imagine the Possibilities of a Creative mind

Be sure and let us know Leo.
Heck I've spent more than that on a couple of drinks and a good steak.

This eBay seller has a set of 4 for US $18.88 with free shipping. I'll order them and let you know what I discover. 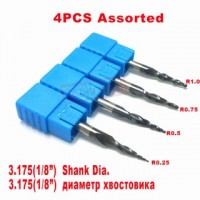 I will be happy for us to compare opinions.
Imagine the Possibilities of a Creative mind

Keep us all posted. Thanks
Dave
Top

LOL, I ordered some a couple days ago too.
Should be here next week.
Top

While we're ordering el-cheapo Chinese bits... I hear lots of people saying how great some are, and how cheap the are... So, I'll try 'em, too.

I ordered 2 sets of what Randall ordered. I figure if a particular size breaks, I'll have an extra of it..

I bought some a couple of years ago (maybe more) as the prices seemed to good to be true, ordered from a couple of different sellers, one lot never turned up but I did eventually get refunded, the others I ordered were a pack of ball nose bits in sizes from 1 - 4mm which weren't anywhere close to the sizes listed when measured & a set of 5 6mm straight shank endmills which seemed to work OK but didn't seem to last very long before the edges were blunt

Still undecided about if it was worth it, the 5 bits cost about what I was paying for 2 bits from a UK company.
I don't doubt that there are some bargains to be had if you can find the right sellers

Chris, you should have read the small print at the bottom of the page, you don't get a battery with those endmills

I have tried similar if not the same, quality was poor, one would not even fit in the collet. Checked and the .25 shank was actually .22, close but no cigar.
Emailed the seller and got the "oh sooo sorry, pleeze send back for your refund" - Of course, shipping it back to china is more than the bit is worth, and I think these sellers count on that fact.

Can't comment on longevity as I'll never use them enough to find out [the one that wouldn't stay in the collet I flat out threw away] I would think they would wear at least 10x quicker than a quality bit.
Doug
Top

Please post results using them with something like Sugar Maple?
Two years ago I ordered 10 1/8" straight ballnoses for the CEL, and got them in 6 weeks....Cut was so horrible,the only way I saved the piece was cutting .015" deeper with my Onsrud 1/8" and still needed more sanding than normal.....still sitting unused in the back of my drawer waiting for me to experiment in dubious stone carving.
Looking forward to comparison cuts.
scott
"One accurate measurement is worth a thousand expert opinions"

martin54 wrote:Chris, you should have read the small print at the bottom of the page, you don't get a battery with those endmills

What!? No battery!? I knew it was probably too good to be true. Now I'll have to spin them by hand...

I'll be surprised if they are worth more than their cheap price. With at least 3 of us getting them, we should have good test info.

The set of 5 non-tapered/battery not included bits shows as shipped already, with a 2 to 4 week delivery window.

I think this is probably about finding the right sellers than anything else, looked at some of the bits again & it is hard to believe some of what is written, one I noticed said that the bits were hand sharpened & sizes were give or take 1mm which is a huge variance lol
Guessing that a lot of the sellers buy from the same manufacturer as well going by some of the pictures, most of the sellers I looked at didn't seem to sell a wide range of bits so probably just buying what they think will sell well.

The first lot I ordered were shipped fairly quickly, waited patiently for weeks & nothing arrived, when I contacted the seller I was asked to wait a little longer which I then did, next time I contacted them they said they would re ship, waited once again for weeks & again nothing arrived. There then followed a series of messages from the seller offering me a 50% refund, their argument was that they had lost a lot with shipping twice. I ended up taking it to ebay/paypal who gave me a full refund. Got me thinking though, did they actually ever send anything at all or where they just hoping I would pay them 50% of the cost for nothing

The other ones I ordered from other sellers arrived quite quickly considering the estimated time for delivery, I should have been a little bit more careful with my testing so I had a true comparison to the other bits that I bought from a UK tool supplier