Can someone help me understand what may be going on with the spindle cooling system.

Pump is working
Lines to the spindle are clear (No Obstructions)
Pump will pump coolant to the spindle easily.
Coolant will not pump through the spindle (I'm not sure how this is suppose to work)

Can the machine be run without coolant on?
How does the coolant flow through the spindle? (Does it do this only when the spindle is running or when it starts to heat up?)
I'm not sure how long this has been going on but the spindle has never gotten excessively hot.

Any help would be greatly appreciated
Top

They can get gunk in them and form a sludge. See if you dislodge it with compressed air.

Were you using regular water of RV Antifreeze as your coolant?
Gary Mitchell
Kentucky, USA
Top

RV Anti Freeze as it is in my shop and the heat is not on all the time in the Winter. Turn the heat on when I'm working out there.

I thought about trying to blow compressed air through it but did not know if I would damage anything.

All fixed up. I connected a small piece of hose to the in let on the spindle and could not force any air through so I used some small wire air brush cleaners to go in and it worked. Loosened up some junk and then put the compressed air to it again and it blew junk out of the spindle. Hooked it back up to the pump and it is pumping like a champ once again.

Thank you to you all for your help it is much appreciated for sure.
Top

Glad you got it working.

I'm curious as to how you got a crud build up... Have you always run antifreeze?
John
Maker of Chips
Top

I have always run RV anti-freeze which is what I was told to run by Laguna. However, I was lax in changing it on a regular schedule to keep it clean as I think it breaks down over time. When I took a look at it in the coolant container it had an clear glob of scum that looked like some type of floating scum. (Very nasty) In addition, I discovered that the hose connection to the out going side of the pump was missing the rubber seal. Which I think dissolved from the anti-freeze and may have been pumped into the spindle over time. Once in the spindle and the pump not working properly as the connection finally disconnected causing the material to sit in the pump and harden clogging it up. (not sure about this but it is what I suspect may have happened)

On the pump I fixed it by elimination the rubber seals and replaced connection components with brass fittings.
Top

So I retrofitted originally with a small chinese pump and a 1 fan radiator in a closed-loop system. I also set it up with a thermostat to turn on a cooling fan on the radiator at 26 deg.. With that setup I was getting temperatures about 35 to 38 deg.. So I switched to the 2-fan radiator and temperatures hovered in the 25 to 28 range. That lasted for 2 years and then the pump died. So my son, who is really into gaming computers, set me up with this higher end computer pump.

Now with the better circulation I usually run between 20 and 24 deg.. I use regular computer coolant which is supposed to be much better than antifreeze but that's just my son's opinion. The only thing I don't have on it is a flow meter but temperature would tell me if something was wrong fairly quickly. I estimate I've added a little over a pound to the gantry weight. 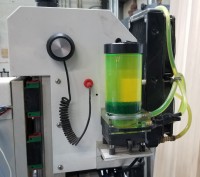 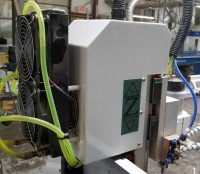