I know this is old hat for many, but I saw Steve G. describe it and this is the first chance to use it.
I made an Ebony piece for my Mother, and splits showed on back, so I carefully drew in the split and then made a "Twig" shaped butterfly wedge.
Made a dozen extra as long as I was set up for it.
Drawing that one was easy, but saw Steve was drawing JUST one wedge located on a small file and centering it at 0,0, and then simply moved the bit to where he wanted the inlay, and Zero his X,Y there and carve away ad infinitum.
Got some wet Black Walnut that was a tree in my Aunt's yard 2 months ago. I snagged a bunch of branches/firewood sized stuff, and my Uncle who just bought a portable mill took the trunk size stuff(Just turned 70, and he buys a SAWMILL.
My Aunt saw the little live edge stuff I did for display stands, and asked if I would finish the first small slab my Uncle cut the same way.
Apparently he went a little light on the end grain coating, as it was checked to heck.
I cut most of the checking off and sanded/sealed it with Linseed/Beeswax "Butter" that has kept my small pieces from checking/splitting, but got a crack that spread 6" the first 2 days, and then kept going.
Yesterday tried Steve's method and it went SLICK as the piece is odd shaped and my wedges were small.
They're only 2X.3" deep, but should keep it from spreading I hope.
I'll probably come up with some deeper/fancier wedges once wood is dry, and I know what she wants to do with it(orientation).
My Mother said "Aaaw...it's RUINED!"
Yep, probably wind up in the scrap bin
Thanks Steve!
scott
I told Uncle to align logs with the crotches, lot's of double crotch in the stuff I told him to cut 10/4
This must have been from one of the 2 short pieces the ignorant tree guys cut to make it easier to move and cut into firewood later.

So showing my ignorance (as usual) are the wedges shaped a particular way or is it just a case of making up a pleasing looking shape to act as a sort of feature ?
Also guessing you can't simply drill a hole at the end of the split as you can with some other materials

Martin,
Doesn't really matter what shape, so long as it's irregular/wedge shaped to physically prevent movement.
https://www.google.com/search?q=nakashi ... 66&bih=628
First attempt at a VInlay was a piece of split Walnut(HEY...Paul Z. said to start with scrap, and then it morphed) and tried Bird shapes(vultures) and an African tree scene to end the splits.
On the back side I did a big one(Twig on right)that I bitmap traced from a Dendrology book of some sort of budding twig(Elm?).
So when Mom's Ebony split, I just shrunk it to fit and used the inlay toolpath, and a .0625" downcut.
It really did lose something in the size/bit reduction.
Thanks guys!
scott

I've used that method for single butterflies, but I tried something that other day that worked out pretty well. I took a picture on my phone of the slab and transferred it to my computer and imported it into VCarve. It was a longer check and I wanted to add several butterflies to it. I scaled the bitmap up to actual size and then traced over the check to create a vector. Then I drew my wedges where I wanted them. Afterward, I removed the check vector and centered the butterfly vectors to the job center. Created my paths and took them to the machine. Finding the center of the check, I set the job center and went off. Here's the result. I was a bit nervous, but I got pretty lucky. They were pretty much dead on line. 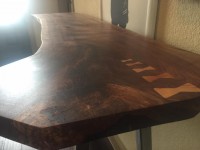 Haven't needed anything like that yet, but it's coming...
Thanks for posting the pic and method.
I've thought about entering a pic of the exact piece of wood in my material files and doing it that way, but the occasion hasn't risen yet.
NICE PIECE!

How deep did you go?
scott
"One accurate measurement is worth a thousand expert opinions"

I went 1/2". It wasn't a deep crack. I did it more for show than function. I'm actually going to try a "shoelace and bow" inlay soon. I think it would look quirky and cool.
Top

Thanks Chris!
The other thing I learned was to make the Males FIRST, and then leave the female on the the machine to test the fit so you can dial in any pocket allowance for a perfect fit.
Having a stock of various Males already cut makes things go WAY faster:)
But I like the idea of cutting different "butterflies" depending on the character and placement on the slab better.
After being limited to the old router templates for so long, CNC'ing in your own style is GREAT!!

Not the only machine in the shop, but the most versatile...loving it!
I want to try a Tree shaped one:)
scott
"One accurate measurement is worth a thousand expert opinions"