few years Ago !
FDMC Magazine
McGrew Woodworking gets sweet contract with Krispy Kreme bus
By William Sampson
March 6, 2012 | 6:00 pm CST
What do doughnuts, an old tour bus, and CNC woodworking have in common? The answer is a recent project at McGrew Woodwork Inc. in Columbia, S.C.
Jim McGrew, who was featured in CabinetMaker+FDM magazine in June 2010, was contacted by Outcast Kustoms of Mooresville, N.C., to help restore a 1960 Flxible Starliner bus so it could be used by Krispy Kreme to celebrate the iconic doughnut company’s 75th anniversary on a cross-country “Glaze the Nation” tour.
Painted to resemble Krispy Kreme’s famous boxes, the green and white bus was officially unveiled at the Daytona 500 in February with famous race drivers Kyle, Richard and Austin Petty on hand.
“Because our purpose is to 'touch and enhance lives through the joy that is Krispy Kreme' we felt it was important to get out of our shops and take the party on the road," explains Dwayne Chambers, chief marketing officer for Krispy Kreme. "We searched the entire country to find a vehicle that had just the right balance of nostalgia, retro and cool. There were a lot of possibilities, but our search always seemed to come back to the Flxible."
McGrew used his CAMaster CNC router and Vectric software to do all the interior millwork on the project, including inlaid countertop logos, engravings and special lighting details. There is even a doughnut pole column. The restoration has been chronicled for an episode of Velocity's new Outcast Kustoms show, which airs April 2, 8pm ET on Velocity.
McGrew has made a point of capitalizing on the capabilities of his CNC router to tackle unusual projects and expand his business. He has done everything from intricate architectural carvings to life-size chess pieces. But the Krispy Kreme project will likely be his broadest exposure with both the nationwide tour and television show connection.
Operated for Krispy Kreme by Richard Childress Racing, over the next few months the Krispy Kreme Cruiser will make nearly 500 stops at local fairs and festivals, Krispy Kreme shops, a myriad of major events in 37 states, and spontaneous stops along the way with fun and games, prizes and giveaways, and of course Krispy Kreme's doughnuts.
To check out the Krispy Kreme Cruiser tour schedule, go to http://www.krispykremecruiser.com. 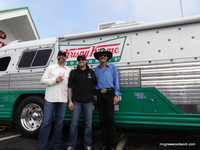 Re: Glaze the Nation Krispy Kreme

Re: Glaze the Nation Krispy Kreme