I don't really post much of what I do mainly because it's mostly run of the mill & nothing special & while this job is nothing special it is a good example of how accurate 2 sided machining can be.
Just bought a bandsaw which will hopefully allow me to resaw the tree slices I generally buy, the sawmill I buy from sell kiln dried slices & I am limited in the thickness of slice I can buy mainly because having no way to resaw means a lot would end up as sawdust & as they sell by the cubic metre that makes for pretty expensive sawdust at times

Although the main function will hopefully be resawing the machine will obviously be used for other things so I had a look about for other things bandsaws were used for & some of the jigs people were using. One thing people seemed to be doing was making larger tables so that was the first job. I wanted to be able to put it on & take it off fairly quickly & not have to then spend a long time ensuring it was square to the blade & as the original mitre slot runs parallel to the blade I figured if I could use that & a bar which could be clamped to the table at the back to keep it in place. Also wanted 2 mitre slots on the top one either side of the blade so this seemed like a good candidate for 2 sided machining.
I machined the base first & then flipped it to cut the 2 mitre slots, the slot for the blade & the profile cut out. Machining the back first allowed me to put the dowels in the base of the table rather that the scrap which allowed me to cut the board fractionally over size plus it meant that I could profile cut it without needing to add tabs & worry about it moving

When I placed the new table on the bandsaw table it lined up perfectly with the blade centred in the slot that had been cut for it so very happy with it, it has had a couple of coats of paste wax & is silky smooth

Of course then I had to go on & make a small sled to fit the new table top, because I have spaced the 2 mitre slots an equal distance from the blade the sled I have made fits great on either side of the blade That looks like a nice, useable table. How big is that Jet?
Top

gkas wrote:That looks like a nice, useable table. How big is that Jet?

You mean cutting height? It's about 16" I wanted something that would cut about 12" but not be on it's limits all the time. Unfortunately once you go above about 12" they get a lot more expensive, the bandsaw is the new Jet JWBS 18

Very good idea and use of the CNC power. I did a table saw sled similarly, machining a slot for the mitre bar perfectly perpendicular to the front. Best accessories you can get are the ones you make on a CNC. Great job.
BillK
https://www.facebook.com/CarvingsByKurtz
Top

Bandsaws are a great investment, they pay for themselves and give you so many options. I sold my planer after I got a good bandsaw and drum sander, like you I hated to see all the wasted woodchips going in the fire pit, and I very often have use for custom thin boards. I can cut near veneer with my resaw blade, check this guy out for some tuning tips

A very tidy looking machine you have there Sir.
From Axminster I presume?
It's a tidy ship all round
Regards
C
Top

At the moment it may well be going back but it will be replaced with the same make & model, had this over a week now & it hasn't cut anything yet

Nice Job Martin!!
Shame if there's a problem, BUT better to do now than Try later!
Miss my old Inca 3-wheeler...but we never did get it to track perfectly with the 3 flat wheels:(

NICE addition to your shop when everything is finished!!

Just a note about bandsaws in general:

The blade is really not parallel to the miter slot. Unless you adjust the blade to be parallel. It amazes me how many articles I have read and YouTube videos I have watched that show some "expert" demonstrating how to align the fence or miter slot to the blade. The blade and the cut that is made is adjusted by using the tracking control on the top wheel. The top wheel is crowned, the tracking knob allows the top wheel to be tilted. Doing so will cause the blade to run towards the front, middle and back of the wheel. Depending on where it is running the blade will try to cut to the right, on center or left. I have seen fancy fences with adjustments to allow compensation for blade "drift". There is no blade "drift". That "drift" occurs because of the positioning of the blade on the top wheel. Even running in ball bearing guides the blade will tend to "drift" if that tracking adjustment is out of whack. Not as much, but still some. Some of the more long winded experts will bloviate on how the grain of the wood "pulls" the blade right or left. Uh huh.

One of the absolute best things to do on a bandsaw is to round over the back edge of the blade with a stone. It is easy to do, only takes a few minutes, and allows the blade to turn a slightly tighter radius.

I know all this because I fought with my bandsaw for a couple of years since I did not know diddly squat about how a band saw actually works. Then one day I had enough and sat down to figure it out. It is easy to be ignorant about a band saw because they are such a simple machine, nothing to it, push work through blade and it cuts. Unlike a badly tuned table saw which will happily throw pieces back at you and burn work until you the message about adjusting things.

I am like XXRay (Doug), once I had the bandsaw all tuned up and understood how to adjust it when I changed blades, I sold my planer, next to go was the jointer. I can flatten most of the work I do on the cnc. When I do something long I put a long fence on the TS and joint pieces there. For jointing on the TS I take a "rough cut" until I get a straight edge, then a very light finish pass at a moderate feed rate. Never have a problem with glue ups. Oh, one other thing since I am feeling blabby this morning, a Wixey type angle gage is a huge help in adjusting things like a TS blade to be perfectly 90 degrees to the table. Works good on the bandsaw too. Heck, it even works on the spindle in the cnc router! Just chuck up the biggest piece of straight round rod it will take and away you go.
"If you see a good fight, get in it." Dr. Vernon Jones
Top

Slicing boards like this to me is almost magic, for years if I wanted to take a .5 board down to .25 my only option was the planer, and that is hugely wasteful, its stressful, messy, loud and takes alot of time. I can now slice 5+ usable pieces from 1" stock and the only waste is the sawdust the blade creates. Most of my cuts come off the saw ready to use but if I need to dimension them further, i can get them literally paper thin and smooth as glass with the drum sander, another miraculous power tool that I couldn't do without. I'd advise anyone in the same position, put the planer on craigslist and get a quality bandsaw [and drum sander if able] - Then tune it up and get the best blades you can buy. 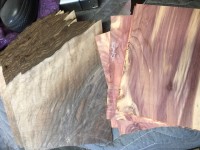 Figured walnut and Kentucky cedar, slices are about 1/8" thick. I make things like this out of them and much more

Bought this years ago.

Xxray, that was my main reason for buying, most of what I use is about 3/4" so I was limited to buying boards at about an inch thick from the sawmill unless I was prepared to waste a lot. For me this was a very expensive machine but I am looking at it as an investment. Looked at a couple of UK forums to see who people were buying bandsaw blades from & contacted a couple for advice. To be honest there doesn't seem to be a great deal of difference in price between the quality blades & the cheap blades for this machine so buying the quality blades isn't really an issue I've attended this guy's presentation at the Woodworking Show that tours many U.S. cities. I tune my bandsaw using his method (tooth gullet at crown of wheel) and get no drift whatsoever.

Thanks Xxray & Mark, had aleady watched that as some people on woodworking forums I looked at had mentioned it, but apprciate you mentioning it as well I use a Laguna Resaw King blade IMO the best $$ can buy, I have tried others and have a few for backups but this one slices like no other and puts in alot of service before dulling becomes an issue - Can also have it resharpened for a small fee 3 times. Not a good choice for freehanding wood though, most blades purpose built for resawing aren't. No need to get hung up on what allegedly is the best, but a quality blade can make a world of difference if you are after precise, repeatable results. I'm sure you knew that, just spouting to the wind ! Good luck on whatever problem you are having, and nice work on the table.
Doug
Top
Post Reply
24 posts