About a year ago i was asked if i could help repair the fiberglass spitfire at work that was damaged by children swinging on the 20mm cannons. As i don't have a rotary axis i decided to do a sliced model, there was a hole through the middle 20mm that held a fiberglass rod that went into the wing. here are a few pictures of the construction and of the the spit before and after it was moved. 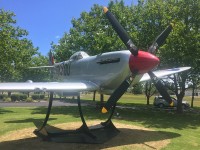 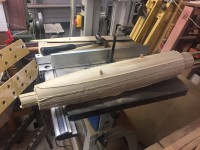 Excellent project and outcome. Is that you sitting in the cockpit?
Top

EXCELLENT repair job!!
Congrats on a job well done:)
scott
"A perfect universal hold down is "Unobtainium"
B. Watson

That is interesting. Every once in a while I'll see a mounted airplane, usually in front of a National Guard facility, but I always thought they were real ones, not ones made out of fiberglass and foam. Nice repair Job.

garylmast wrote:That is interesting. Every once in a while I'll see a mounted airplane, usually in front of a National Guard facility, but I always thought they were real ones, not ones made out of fiberglass and foam. Nice repair Job.

They usually are real ones Gary. Well, sorta real anyhow. Most of them have their engines removed, particularly jet aircraft. And generally they have been cannibalized pretty thoroughly. Cockpit/flight decks stripped of all instruments, electronics, etc.

My favorite one is in St Michael's Maryland on the Eastern Shore. It is an F-104 that a guy with more money than he knows what to do with bought. A couple of years ago he had it staged out near the road of his estate at XMas as if the F-104 had collided with Santa's sleigh. Now it is sitting over at the airport in Easton Md. The guy usually puts up some quirky display at XMas.

I took another look at those pics. That plane may be mostly real. Obviously one does not want to park a plane that has functional machine guns and cannons mounted in it where the public has access. It is mighty clean looking but some of the detail around the cockpit looks real to me anyhow.
"If you see a good fight, get in it." Dr. Vernon Jones
Top