For an Old Friend

For an Old Friend

I recently found out that a friend of mine for over 40 years just found out his riding days are over. Seems he has something wrong with his balance and the doc told him it would be a good idea if he did not ride anymore. Problem was his wife was with him when the Doc told him that. We all know how that turns out. Well, not to be totally bummed out he has decided that he is going to fix his garage up the way he has always wanted it instead of the way it has always been. Right down to a big comfy easy chair, large screen TV, built in bar. . his motorcycle. . you are getting the picture.

So. Figured I would make something to hang on the wall for him. Here it is, not painted yet, may never get painted, all depends on what he wants to do. 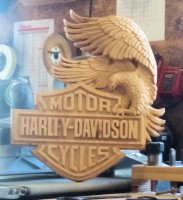 It is roughly 18 inches tall. The relief depth is slightly over 1.6. It is construction pine that I laminated to reduce the warpage.

Interestingly this thing cut really, REALLY well. I have been using chinese HSS bits for a while now. Very little fuzzies.

Edit: More about the settings. I applied a 6 degree draft to the model. Then I did a slight overall smoothing. The roughing was done with a 10mm end mill running at 350 IPM 6mm deep. I did a secondary rough cut with a 6mm ball nose. I modified the cnc file to eliminate most of the air passes so that it would not take so long. The finish cut was programmed at 150 IPM with a 1mm tapered ball nose. Of course it only got to 150 for short periods on the straightaways.
"If you see a good fight, get in it." Dr. Vernon Jones
Top

I know he's going to hang it in a place of honor in his man cave.
John
Maker of Chips
Top

That is awesome.
How long did it take to cut?
Good job.
mark-s
Top

Beautiful work. I know a few friends who would like one of them hanging in their Man-Cave.

Special, I'm sure your friend will cherish it.

mark-s wrote:That is awesome.
How long did it take to cut?
Good job.
mark-s

The roughing cuts took about an hour. The finishing cuts came in at just under 5 hours. With all that detail the finishing cut spent a lot of time at under 80 IPM. Also because of the depth the area around the outside had to be relieved so the collet would not collide with the surface. I am going to set up the tripod this morning and get another pic, the one above is a bit blurry.

Relieving around the outside brings up something I would love to see in Aspire, the ability to model the collet and router and then have the software detect collisions. It is not important on thinner work but this deep stuff can really raise the angst level.

Great job! This is inspiring. Thanks for the details, I am just getting into CNC modeling and it really helps.
Top

Outstanding Ted, I am sure it will be a great hit with your friend and any of his friends when they see it. That has to be a hard deal being told you can no longer ride a huge part of your life. Thanks for sharing.

Quite possibly the finest Harley design I have ever seen, nice work - 6 hours not bad at all for something like that.
Doug
Top

The pic above was a bit blurry, etc. Here is a better one: 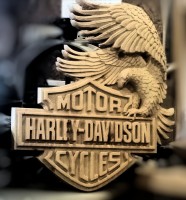 Probably got a little crazy with adjustments over in Corel Paint Shop Pro.
"If you see a good fight, get in it." Dr. Vernon Jones
Top

Just a quick question how much does it cost for the copy right useage. I would like to do something along the same line only with a little message on it
Top

fixtureman wrote:Just a quick question how much does it cost for the copy right useage. I would like to do something along the same line only with a little message on it

I doubt if Ted has a Licence for this sort of thing but he hasn't produced this to sell from what I have read, I have looked at Licencing from a number of different companies & it's not just the cost of the licence but the hoops they make you jump through that have put me off