The local wood working club has a challenge out for the March meeting, which is to bring in a new project (any kind) using 3 different species of wood.
Another informal challenge came up in a discussion at last meeting how to make a barrel. So I tried to rise to the occasion making a barrel using 3 different wood species.
Unfortunately I don't have much use for wooden barrels but given the similarity I changed the plan to make a conga drum (a miniature conga, that is).

After some deep thinking, I came up with the math and software to generate an .stl of a stave (given some height, diameter and thickness parameters) that is machined from flat stock but would make a tight barrel once bent into shape. Given the rather tight bending radius I had to steam (actually boil) the staves after cutting to get them into shape without breaking. The advantage was they stayed in that shape after some additional baking without hoops and only using glue.

Following some pictures of progress.

Cutting from Walnut, Ash and Cherry (not shown): 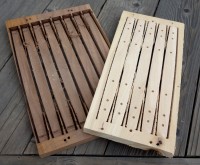 Bent into shape after steaming:

A did one out of some scrap oak flooring a few months ago.

Top and bottom lid intended for the barrel (I did end up not using the top ring and later cut a 2" hole in the bottom lid for the conga bottom end):

Glued together, with loops to attach the drum head:

I am not much of a musician but sounds good to me (given the tiny size). Maybe I should record it sometimes.
Top

Pretty cool project there. And yes you should record it sometime and post would love to hear it. Thanks for sharing.

Forgot to mention: The Ash has a beautiful grain pattern when finished (for a light colored wood) but this was about the worst wood I had to machine so far, very fibrous and fuzzy, and the ballnose bit tore out some deep surface gashes, requiring serious sanding. It also warped the most by far after steaming. I am probably not going to touch that again for CNC machining.
Top

Love what you came up with

BTW - I recently searched for a formula for determining the curve/width of the stave in order to produce a barrel with wanted dimensions and shapes and came up empty. It seems that most barrel makers are using inherited patterns. I did come up with a procedure to come up with the shape and size wanted by plotting diameters at different positions. If you are willing to share I would love to know how you do your calculations.

Fleming wrote:...... If you are willing to share I would love to know how you do your calculations....

Hello Paul,
My assumption was that the bending shape of the staves is parabolic, which is kind of close to what real barrels look like. However, I am using staves of even width, not the alternating wide/narrow width staves that a cooper would use.

I wrote a program that allows for input of 3 diameters at 3 different height locations as well as the thickness of the staves (i.e. barrel wall). With that I can determine the parameters for a 2nd order polynomial describing the shape. Depending on these diameters, it could be a barrel, a straight sided bucket or even a diabolo shaped vase with a smaller diameter "waist" in the middle. The program will calculate the position of the inner and outer surface points of the stave in final (bent) form with a selectable facet resolution. The final step is to "straighten" these positions how they end up in a flat board when unwrapped along the center chord of the stave.

These position coordinates are used to generate an .stl file that can be imported into Aspire.

I hope this explains the somewhat arcane method...so far this is a simple program with hard coded parameters. I was wondering to make it more flexible with a real user interface but I guess the market for such software would be rather small and not worth the significant effort with the UI.
Top

Thanks for the explanation. It helps. What I was working on is a procedure entirely done in Aspire that allows for a particular shape and size dimensions to lead to a 3D shape for the stave that makes into a barrel without the need for steam bending. I have done preliminary carves that prove it works and am currently working on a barrel shaped jewelry box. I am documenting the process and will post the results once finished. Your beautiful work inspired me to go ahead and continue with the project.

Really interested to see how that comes out. I suppose you want to machine the staves into their final curved form and that should work well for a jewelry box size part. For my larger barrel it would just take too much lumber to be efficient.
But I do not know the Aspire modeling tools well enough to create such a part. Probably something like a spin shape with a limited spin angle?

I had to steam bend the staves of my little drum because at 11" tall and 3/8" thick I could not bend them dry (especially the walnut) to 1" bow in the middle without cracking. On the other hand, dry bending would have required hoops while steam bending/baking keeps the deformed shape and allows for glue assembly. It was actually not a big deal, I used a huge pot (16" diameter) and simmered the staves for 90 minutes, then got them to shape with large hose clamps (or jubilee clips for our UK friends) before cooling too much. Then baked (kind of kiln dried) the entire assembly in the oven at 230 F (110 C) for maybe 3 hours.

My biggest mistake was that I had made the calculation for 21 staves (7 sets of walnut/ash/cherry) but when assembling I somehow forgot one walnut stave so I ended up with 20 staves and the lid part too big to fit. I machined down the lid to fit and doubted my calculations until I saw that the stave was actually missing in the pattern. Oh well, I could save it. I guess a successful wood worker must be a good cheater.
Top

dwilli9013 wrote:Pretty cool project there. And yes you should record it sometime and post would love to hear it. Thanks for sharing.

A real conga is supposed to be played with whole fingers and palms but that little thing requires fingertip action.
Top

(actually made me go in and tap on my Indian Drums:)
Didn't realize you were good at ropework:)
Good thing you're in Southern CA, humidity changes here..you would have had to use a tensioner for tuning, or rawhide so you could wave above flame to tune

VERY understanding wife to be boiling and baking wood in the kitchen!!

Did the winner of the challenge get anything?
NICE job!
scott
"One accurate measurement is worth a thousand expert opinions"

dwilli9013 wrote:Pretty cool project there. And yes you should record it sometime and post would love to hear it. Thanks for sharing.

A real conga is supposed to be played with whole fingers and palms but that little thing requires fingertip action.

AWESOME how cool is that. That little tune bought me right back to Gilligans Island when the cast got caught up with some island head hunters. That very finger conga could have been play the music.
Thanks for sharing that. I really hope you won the 3 species challenge. Looks amazing and sounds great to boot.

Yes my technique does carve all dimensions so that only glueing the staves together is required. You are correct that the amount of curvature is limited to the thickness of the material. It is good for small projects but not for large ones.

scottp55 wrote:.....Didn't realize you were good at ropework:)
Good thing you're in Southern CA, humidity changes here..you would have had to use a tensioner for tuning, or rawhide so you could wave above flame to tune

No idea about ropework here. But I did not want to add some clunky tensioning metal hardware and found a Yotuobe video about how to rope-tune an African Djembe drum. Actually very simple. So I guess I have Congdjembda now.
Not sure about the humidity changes yet. The drum head is actually rawhide and I hope it is not going to pop when we have very low humidity. Otherwise I am not too worried. I consider this more a functional decorative item and if it gets de-tuned so be it. I can alway re-string the ropes to adjust.

As for the challenge, the club meeting is only in March. And since I am a new member I don't even know if there is something to win. Maybe it is only for the bragging rights...
Top

Didn't mean the clunky metal tensioners, for some reason I was thinking mini-winding sticks like for bow and frame saws....But the knotting youtube Would give more even tension.
Hope it's a good club(not a joiner much myself) and looking forward to other "Challenges"