My Daughter-In-Laws birthday is coming up and I was trying to figure out what to buy/make her. After finding Todd’s Penguin Welcome sign I figured this was perfect. A year ago, my son and daughter-in-law started a fitness center called “Rockhopper Strong Fitness”, their logo is the Rockhopper Penguin… 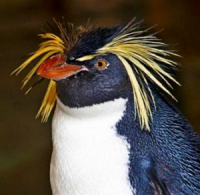 So, I figured I’d take Todd’s sign, model the head of a Rockhopper Penguin and I’d be done…. Found a cute charature of a Rockhopper that I could model and modeled it in Aspire. 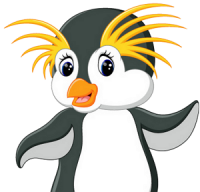 After modeling the head, I added it to Todd’s sign. I’m done!

Before I could cut the sign, we left on a trip before Christmas. On our first night on the on the road we were staying at a hotel that had an LED dry erase board next to the check-in desk. This got me to thinking (the snowball starts to roll). Instead of a static Welcome sign why not a sign she could use to Welcome people and write messages about special trainings, etc.… So, I got on line and ordered an LED dry erase board that would be at home when we returned for our trip. I got to thinking about how I was going to attach the flippers and head to the sign. I decided a frame would do the trick. Not wanting just, a boring square frame I decided a “rock” frame would be much better. So now I’m modeling a rock frame (snow ball is getting bigger and gaining momentum).

When we got hope the LED dry erase board was waiting, now I could get the measurements I needed to finish modeling the rock frame. After modeling the frame, adding the flippers and Rockhopper head, I discovered several problems. The frame was too long for my CNC, no problem I’ll just tile the Y axis. It’s also too wide for my CNC. I don’t want to just tile the X axis as that would put a hard-cut edge to the two halves and I figured that would be hard to hide when I put the two halves together (that snowball is now out of control). I decided to make two separate jobs so I could control how and where the cuts would be between the two halves. But wait there’s more…. The sign is too tall for the Z axis on my CNC (snow ball is getting huge). I figured out if I sliced the Rockhopper head that would take care of the Z axis issue (job # 3).

I wanted to keep the sign as light as possible, so I decided to use 2” pink foam board from the box store and back it with 5mm lauan plywood to give it a bit more rigidity. I’ve used this technique before, and it works well. Outside of an error in Y axis alignment that I made on the backside the two halves cut just fine and so did the top slice of the face.

After gluing the halves and face together it was time to sand, fill and paint.

The Snowball took a lot longer to finish that I was planning to spend on this project, but I can’t complain about the end results. Hope she likes it…

Here are some production pics.

Wow that was a mighty Snow Ball! This is great to see how you took one design and completely transformed it to your own, as well as jumping all the hurdles that temporarily got in the way too!

Thanks for sharing the story of your build it's nice to see how others overcome small snags to get to the end result you've always wanted, Well done!

Thank you Beki for the kind words,

It was a fun project. I've used most of the processes before just never had to put them all together in one project.
John
Maker of Chips
Top

Very unique, John! Thank you for leading us through your process with the detailed description and photos!
Michael Tyler

Started as a snowball and rolled into an avalanche. Looks like a fun project that your daughter-in-law will truly enjoy and use in their business.

WOW John that looks amazing. Thanks a ton for sharing it and your process. Hand made. Far more meaningful when gifted. Sure she will love it.

Congrats on such a FINE result....Never Mind combining so many techniques you'd never combined before!
Snowball from Heck indeed!

You didn't mention a foam hardener for the Pink Foam?

Yea, I know, I started not to post it because it was YARLDEB, but I figured since is was a knock off of Todd's Penguin Welcome Sign it was just a little bit different than the rest...

Anyway, thanks to all for the accolades. Next time I'll try and proof read my write up a little better

Don't want to say how long "YARLDEB" took me to figure out....People would mentally drop my IQ 20 points

I kinda thought other people would mention some of their "Projects that got away"....be an interesting separate thread.
"Oh....That's only a day in the shop" and 4 days later it's still not finished:)

I've glued 1" Celotex to Lauan for some soundproofed(kinda) pocket doors with Barge contact cement, but what adhesive did you use for your Lauan/2" foam you've found successful?
GOT to make set of doors from shop to unheated garage, as existing blue foam and poly sheeting really aren't good enough at these temps (AND UGLY:(
Know a LOT of glues that eat foam....

Wish I could see their faces when you gave it to them!!
THAT will be "Priceless"

scottp55 wrote:Don't want to say how long "YARLDEB" took me to figure out....People would mentally drop my IQ 20 points

That works too, but I was thinking of the acronym "YACC" (Yet Another C Compiler), I guess my past is showing

In the past I've used Titebond III, but it's a air dry glue so you have to be careful about how much you apply or it won't dry. I've started using Foam Fusion from Hot Wire Foam Factory. It's a chemical curing glue, seems to work well.

Hot Wire Foam Factory also makes a Foam Coat that I used to put a hard coating on the foam.
John
Maker of Chips
Top

Thanks Scott, but my hands are getting so shaky I'm having a hard time painting detail.
John
Maker of Chips
Top