One of my favorite designs haven't done one in quite a while, have a gorgous plank of Bolivian rosewwod so I got busy.

Project was 20x12", pretty good sized. First attempt was a comedy of errors and ended up wasting some fine wood. Was doing a roughing pass, figured it would take an hour or so so I went to do other things. When I returned the machine had stopped not even half way finished.
Come to find out that my vac hose tripped the Y limit switch and the machine auto aborted. I had better options but I figured the finishing bit could handle the rest since the roughing was half way done, I was wrong.
Bit went far deeper than I had imagined it would and went very fast on the 1st straight run ,,, It stuttered as I was reaching for the pause button then came to a jarring halt.

So the machine had lost its position with the rough treatment [luckily didn't snap the bit] ,,, So I spent the next half an hour trying to get things lined up perfectly so I could complete the rough. Was finally satisfied and as the bit dropped down I realized I had forgot to reset the Z with the larger roughing bit, before I could react I had bored through the wood.
All right, quite a ding but I'll worry about that later, reset the Z and for reasons I don't know, it was still cutting too deep and was cutting off all the high features that it was supposed to cut around. So I gave up on this piece and started another. Forlorn disaster of my making ... .80 thick, I machined about .5, so in theory I should be able to salvage a nice .25 chunk with my bandsaw and burn the rest

So back to work with the next cut of the plank, was extra cautious [or so I thought] to make sure nothing went wrong, looked great roughing and cutting, what could go wrong ? 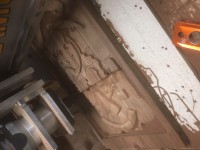 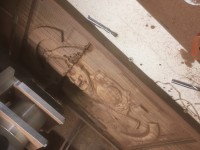 Between the roughing, finish and vcarve probably took around 8 hours.
When it was about 80% done I thought I noticed some white under the wood - The white of the corian spoilboard. Wiped away some of the dust and sure enough, I had managed to cut too deep and I was cutting through the wood.

Was obviously discouraged but this has happened before, I'll shave off a slice from the first ruined piece, glue it on the back and you would hardly ever know I had messed up.
Couldn't get a good cut with my bandsaw, the blade is shot and it started smoking something awful. Managed to cut off enough to cover the cutout but it didn't match up as good as I had intended.

Still looks nice, hard to get a good shot with lights, I'll post another outdoor shot tomorrow if I remember. Used to coats of matte clear coat.
Quite a project, I sure did not intend to cut near that deep ,,, Goes to show especially with 3D, it pays to double and triple check everything before you start. In material setup I could tell margins were slim but I didn't think this would happen.
Obviously the plank must have been slightly off level, else it should have cut through the whole backing, which I would have noticed right away. Looks nice. Anarchy did not give up without a fight. Glad that you prevailed!
Top

Almost uncanny how much trouble I had with this one, but all can be ascribed to lack of attention to routine details.

Couple more shots, you can really see the patch good in the 2nd pic. 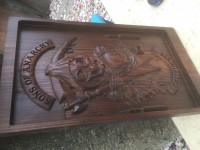 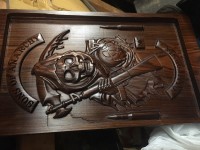 GLAD to see someone not too proud to show a project that went NOT so smooth Doug!

Shows good patience to continue on and do the best you can!

Reminds me of a plaque I made for my Dad and Step-Mom where the first side went smooth as silk, and I took a pic with a penny in the foreground for scale...
The second side had Tiny font describing the wood/dedication/ and a tiny signature...I could NOT figure out why the font in one corner was perfect, and in the other it was so faint as to be illegible!!!
I had just skimmed the board that morning on both sides to be perfectly parallel...it was Shopfox'ed tight against my fences, and then beaten down with my deadblow hammer to my just skimmed spoilboard!

Imagine my chagrin when I had finally Z'd to separate locations of the fonts until I was happy, only to find when I unclamped the board and looked at the front...
I had a PERFECT imprint of the penny I had used for scale.
It was hidden by my X fence(not visible from wheelchair height), and blowing off the sawdust with 90 psi hadn't budged it....felt like a fool

Needless to say...I now run my hand across the WHOLE spoilboard before I clamp a piece!

THANKS for posting!
scott
"Flatness is King!"
B. Watson

I did something similar Scott on the 1st attempt I forgot to mention, board would not level and I figured oh well, I got a squirrely board even though I thought it was perfectly flat.

So I just shimmed it up best I could, with the deep 3D projects perfect level is preferable but not necessary. So I ended up messing it up as I described in the 1st post anyhow, once I took it off I noticed there was a screw there being used to hold down my corian sub board [long story] ,,, I usually don't do pieces as long as 21" so the board was laying right on the screw head causing it to be off level - So thats one complication I didn't have to deal with doing the next one.

Out of practice is really the cause of all of this, though things can go south for anyone at any time. Since last Nov or so I have only done a few projects, mostly due to busy work schedule and the bitter cold.
Doug
Top

Yep...EASY to do!
I've gotten mucked up by a penny on the spoilboard/screw dimples/sawdust/chips on the spoilboard.
Also when we were doing production buttons, we'd set the blanks down on a finishing table, and the bottom of the board is just as important!
A chip or piece of tape on the bottom is just as bad when doing fine detail....NOW I run my hand over BOTH the spoilboard and the actual board.
It rarely bites me in the a** anymore

BEAUTIFUL WOOD!
I love carving any of the Rosewoods!!
scott
"Flatness is King!"
B. Watson

I don't suppose anyone would have a completed 3d file of the table design they would post. im still new at this and would love to have this file. I'm using
Thank you
Top

Jbenson wrote:I don't suppose anyone would have a completed 3d file of the table design they would post. im still new at this and would love to have this file. I'm using
Thank you

Very unlikely to find a free SOA file, pm me if you want and i can point you in the right direction.
Doug
Top

Doug,
Not sure if he wants the "SOA", as he mentions "table design"

Jbenson, could you clarify if it's the"SOA" design you want?
scott
"Flatness is King!"
B. Watson

This model was/is the table design, doubting if he wants a whole table.

Could be, people have inquired before how much a table top version would cost and
I get bogged down even thinking about such a cut.
Have you watched the show ?

Aaah.....Thanks for the pic Doug!
Ha! I can't imagine the cost of the SLAB....never mind cutting it

Can't say I have...gave up TV/Facebook etc. about 5 years ago.
YOU guys are my entertainment

scott
"Flatness is King!"
B. Watson

scottp55 wrote:Aaah.....Thanks for the pic Doug!
Ha! I can't imagine the cost of the SLAB....never mind cutting it

Can't say I have...gave up TV/Facebook etc. about 5 years ago.
YOU guys are my entertainment

Decent show, its a series and the plot grabs ya. About the adventures of an outlaw motorcycle club, gets kinda racy as you might imagine. Was wildly popular and still is, SOA items can be tough to sell as they are still vigilant with copyrights. I make them because I like them and generally don't try to sell unless someone asks ,,, Still have the one in this thread and most of the others from this much larger thread
http://forum.vectric.com/viewtopic.php? ... lit=soa+3d

Not a huge TV guy and never got into facebook at all, I try to be selective with my free time.
Doug
Top

1922,
Gramp was riding to Poland Springs Hotel on Sunday on his one lung wooden wheeled Harley as usual to picnic and see the latest rich swell's motor vehicles, and he was right on the steepest section of the hill where you had to jump off and run alongside in first gear....when his older brother RODE by with one of them new-fangled 2 cylinder Harleys, and shouted "See you at the top Emil!".
Gramp took all his savings(and his best friend's), and bought 2 of the new "Twins"(one for himself and the other to his friend at cost), and became Maine's first Harley dealer.

He and then my Uncle then sold Harleys till 2005. So I grew up around Harleys and spent a minimum of a week a year hanging around the shop, and going to the Laconia races with the crew or family hiding behind the hay bales:)
Remember quite a few times getting hustled back into the workshop in teens and preteens, and a few times being guarded by a line of mechanics when certain Colors showed up.
Seen enough of even regular Gangs, never mind Outlaws, and the stories and fringes of the rougher stuff to last a lifetime.
Uncle finally sold out in 2005(fire in 1999 burned 200 Hogs,one of Evel's stunt bikes, and my Gramp's 1921 and 15 ATF agents showed up and took the thrill out of him)

Hard for me to get excited about MC Gangs:(
Not all gangs are bad, but....

BUT I LOVE seeing you 3D exotics Doug!!!

scott
"Flatness is King!"
B. Watson