Dreamed this one up for some good friends, guy was like a dad to me growing up.

There is alot going on with this one, but also fairly simple. It is a dish design with a 3D rope border carved out of and left in the poplar block.Yes, I could have easily cut the oval out if I wanted to, I think it has more class and style left in the block.
Has a stone textured background and 3D lettering. Also used 3 different fonts, I thought I was crazy at first doing that, but turned out just how I imagined it. 14x9", took about 3 hours to carve and probably an hour or so of hand work, and has 2 coats of matte clear finish.

This is actually the 2nd one I did, first one [last pic] my mistake is obvious, the lettering doesn't pop nearly enough, barely broke the surface of the texture. Completely my mistake, alls I had to do was take a minute to tweak it and it would have been fine. I was astounded and pretty mad when I cleaned up the dust and could barely make out the lettering. Used a bark texture on this one, which came out nice. But I decided it wouldn't fly due to my mistake. Ordinarily something like this would go to my fire pit junk pile, this is just a bit too good for that so I am going to give it to the guys son and let him decide what to do, may make a decent garage hanger with a little more work.

Made sure I got it right the 2nd time around, also added a little radius to the names and made the top and bottom fonts bold and a bit larger. 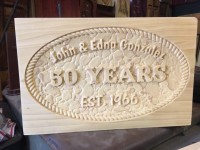 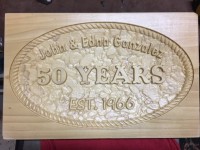 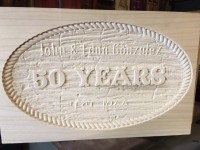 Very nice. I agree about leaving the oval on the rectangular board.

Will you share the processes you used to create the toolpaths?
Top

Was pretty simple, I made the 3d dish out of an oval, then sized in the rope. Aspire already has an oval rope in the 3d library, just had to size it in and play around with base height and merging for the best blend.
Lettering I just used regular fonts and made 3D objects out of them using the "create shapes from vectors" function, didn't want to get too fancy, and you can see the larger lettering is 3D but flat. Having done that I imported the texture and snipped it out of all the areas I didn't want it in, namely the letters and the rope. Added a zero plane, made final adjustments of height to all components to make sure they popped enough but not too much, baked it all and created toolpaths. Used a .03 tapered ballnose, took somewhere around 3 hours, much of that consumed by the texture itself.
Last edited by Xxray on Wed May 25, 2016 9:19 pm, edited 1 time in total.
Doug
Top

I'm just starting to work with 3D a little in VCPro. I had no problem with projecting a v-carve onto a dome but am struggling with raised letters in a dish.
Top

Yeah, I basically treat the lettering as any other component, works fine in aspire not sure about vcp.
Doug
Top

I was getting garbage when doing a rough 3D cut, then the fine cut. If I do only a fine cut of the dish with lettering, it works but takes a long time.
Top
Post Reply
6 posts • Page 1 of 1