Recently a woman asked me if I could shape a "stone" for a ring. She had been traveling in Scotland and found someone who had made jewelry from heather. The heather was dyed and held together with epoxy. She had a ring to mount the "stone" in. I was able to model a shape for the "stone" in Aspire. I cut a sample in maple first and then the heather "stone". 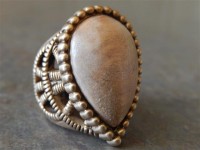 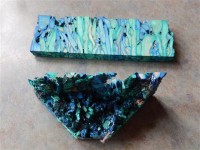 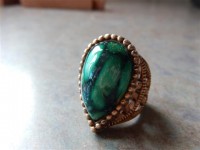 Should be one happy lady! Dale
You will get old if you live long enough!

That is awesome, my wive has been bugging me to try something like that on my cnc and I've always said no but you make it look possible. Would you mind giving me a short "how to"? I would assume you are using dbl stick tape to hold the stone?? Would like to know, hold down method, bit, speed? Anything else that might be useful. I really would appreciate it.

Joe, thanks for the compliments. The first step was to draw a vector for the 2D profile of the stone to fit into the ring and cut out a test piece. I did that with .25" MDF and a 1/8" end mill. I clamped the material to the spoilboard and double stick taped as well to keep the cutout from disappearing. Next I modeled the contour in Aspire and cut a few samples from maple and a 1/8" round nose end mill. The heather was cut with the same specs as the maple.
I'll be happy to answer any other questions but this should get you started.

wow, lots of details there to share.. .. keep on talking..
Top

After the stone was cut out I had to do a little fine tuning. I have a Rigid oscillating bench type belt sander, excellent tool for this job. Then I sanded the whole stone with a 120 sanding mop on a dremel, followed up with a buffing wheel. Last was three coats of finger nail polish. The gloss finish really brought out the color and created depth.
Happy to answer any questions.

This caught my attention and after I went and looked up the heather stone I was amazed to think I had never heard of it before. I sometimes wonder how CNC machines would have changed my work when I was still doing jewelry. Back then it was probably a pretty expensive proposition and 3D programs were few and far between... I carved a lot of wax by hand through the years!

How hard is that stuff? I have a project that I might like to try it on but I would like to carve it. Any info you could point me at would be very helpful!

I went to a local CNC BBQ last year.
There was a guy there who makes $20.000+ diamond rings on his $700 rotary CNC.
Was amazing to watch.
Cheers
Wolffie

The material is no harder than maple. It cuts very clean with a 1/8" round nose bit. As far as pointing you to additional info I don't know what I could add to what I've already posted in this thread. If you have any specific questions I'll be happy to answer.

Note to the administrators: is it possible to change the link color? They are hardly noticeable. TIA
Best regards