Dale, thanks for posting about linked parts(and all that other stuff too

My cleats were designed for a toy 8% the size of a real one (my very old D7 Cat). My cleats were cut with an old machine that used a router but xyz were mechanically driven by hand and/or by using a template follower.

With CNC these parts could be easily cut from maple to 1/4th the size.

By using layers, the screen shot is the basic process I would probably use to cut new ones; or as posted earlier, orient the wood grain along the y-axis, rotate the parts 90°, and rout the edge-grain edges with a bead cutter first.

Thanks Dale, that definitely will make for a stronger (and better looking) track pads. I copied this post and the pictures for future reference. Gary
Top

I am cutting some cleats that are 1" wide. The hinge pin holes were drilled with the CNC using a 5/64" brad point bit (the smallest one I have). The hinge part is 1/4" thick, the rounding to be done with a 1/8" pointed roundover bit. I'll let you know how they turn out and if it works I will post the file. dh
You will get old if you live long enough!

Gary, here are the 1" wide cleats cut from 0.55" thick maple. Four challenges; (1) the point breaks off the roundover bit changing the smart tool setup so I must change the cutting depth in Aspire (still works for rounding the cleats)... and (2) the tape fastened to to top cleats isn't enough to hold the part for the final cutout so it is necessary to tape a piece of wood along the side, or use a wider part and tabs. Using a wider piece and tabs (3) would make the part too wide to drill the hinge pivot holes. Lastly, (4) since the raised cleat top is cut across the grain some of the edges chip off so I just sanded them all off at about a 45° angle.

All in all I am happy with the end result.

I made a spoil board with pins to align the parts for drilling the alignment pin holes.

I use a hand drywall sander to remove the fuzz from the part before using the smart tool to set the bit. I also used it to make the 45° angle along the edges where the split off the raised cleat. 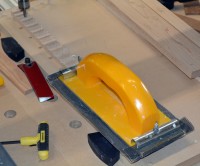 Dale,
The track turned out fantastic. After I wrap-up a few things, I'll try your technique. I just need to find another track machine to build. Thanks for showing me your tricks. Gary
Top

I like the excavator. I have made a few toys like this for my sons and grandson. The only one I did with a cnc was a train I made last July. Surprisingly it made the monthly newsletter. Anyway great job .

Finished process that works for me.
By pocketing the cutouts, making the last cut (bottom) the rounding cut and adding a waste block on each side I was able to cut the pieces with just some uncut tiny left over 'tabs' and the double sided tape to retain the parts. Sanding the parts with a 1x42" belt sander just takes seconds to do each one. Mine is a Delta (now Black & Decker AKA Dewalt) and they cost around $100.
NOTE: the 'tabs' only work because the tip is removed from the round-over bit so it does not cut all the way through.. The tip will break-off after a few cuts anyway, forcing a change to the toolpath cutting depth.
There is enough clearance so the 'tabs' don't need to be sanded round, just sand at an angle top and bottom, after all, the thickness is only about 1/16". 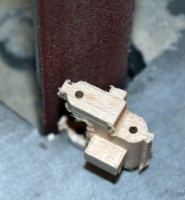 The difference between the two files is the addition of two layers using pockets instead of a profile cutout.

Dale, It looks great but you shouldn't be having a problem with the tip breaking off. Passes with pointeds should be shallow/ramped because of tip and you have to base it on the tip more than anything, but haven't snapped a tip on 2 different brands even in sugar maple and a couple of harder exotics in hundreds of linear and probably 40+ hours of cutting. What brand was that? Used several Diameter/Radius Magnates but now using Whiteside and only a couple of hours steady cutting but I like it better and running same speeds and feeds as my 7/64's 2F up. Thanks for posting all the info!
"Flatness is King"
Brady W.

Scott, Thanks for your input.

Just to let you know, this project was an experiment with the goal of making many difficult, small parts, with the least amount of hand labor (sanding). The end result achieved that goal, inadvertently, thanks to a missing tip.

There isn't any place to put tabs on the sides because it would prohibit drilling of hinge pin holes with the machine.
Secondly once the first cuts are made and the part flipped over the area for a tab is only 0.14" wide not even enough for the double sided tape to hold by itself.

To put things in perspective on this project, using a 1/8" radius bit in hard maple (6.5% moisture content) I made about 360 1" long cuts, 1/8" deep in four passes (0.03215"), across the grain before the first part of the tip broke off. As you can see from the photo a total of about 1/32" broke off in three separate breaks. I made a total of 35 feet of cuts, more than half without the tip, all made with the same bit and it keeps on cutting....

I could use a flat bottom tip roundover without this issue by spacing the parts further apart, creating more waste wood, but in this case the shorter tip was a blessing (no tabs required).

I've been using pointed roundover bits for years and when cutting across the grain in really hard wood eventually on the smaller ones they break of a little at a time. The 1/4" diameter bit has a really tiny point.

I've never broken one cutting with the CNC when using a 1/2" diameter bit (or larger), in oak, cherry, and black walnut to make beads (ramped in) and handle 'pillows' (right and left spirals cut in two passes) on walking sticks etc.

I've used pointed roundover bits from Magnate and Eagle MLCS etc. I think the ones from Eagle are slightly better.

Dale, Kinda figured I was preaching to the choir

I can definitely identify with the "Minimum amount of sanding" after playing with 250 buttons for 10 days, never mind your stuff!
scott
"Flatness is King"
Brady W.

No offense taken, and I do enjoy your comments too; thanks to the forum we all learn from each other.

I just thought you might like to know what I was up to with this project, which I might add actually started several years ago..... gave up for awhile then Gary inspired me to try again. Dale
You will get old if you live long enough!

Dale, Glad no offense taken, also glad depth of cut similar to mine as I'm usually too cautious. What RPM for say 3/16R--3/8"D would you run for say Black Walnut? Have you ever ground the tip of the Magnates down to say .005" flat on purpose? I'm lucky as I come from a gem background and have diamond tools from 180-60,000G wet grinding set up, and was thinking to play with the Magnate tip as a preface to doing my .125"60degree VBits as the company I was buying from increased the flats on my favorite bit to .015" and it's just to "Gommy" now for .18-.22" text and tiny graphics. The tiny flat seemed to work better for us as we very rarely get over 3" Anything! Engraving bits just don't seem to do as well in the hardwoods as a 2-3 Flute Vbits as you have to slow down a bit to much for it to make a profit at a reasonable price(NOT me --Northern Desktop).
Hate to experiment with my 60 Vortex or Centurion, so was going to experiment on 1/8"R Magnate.
What's this walking stick you mentioned to CarveOne?
Big thanks to Both of you guys for your help! ( C1--It's EASY! Just build your house with a 22' antenna in the garage rafters/boost the signal twice with some filters to your Quartz tuner/Adcomm and run it to your in-ceiling speakers in the shop, and Crank it:) ---Small side note--DON'T put steel roofing on house afterwards or you lose 1/2 your Boston stations

I purchase most of my bits from
http://www.cuttingtoolsource.com/
These bits are made for cutting metal so are typically better than those made for wood. I prefer 3-flute spiral bits.

With small bits in ring porous wood like oak and black walnut I lower the feed rate and I sometimes cut twice because the grain of the wood deflects the bit making a rough cut.

As for the antenna, in the old days (30's & 40's) the metal roof would have been the antenna for the vacuum tube or germanium crystal diode radio.

Thanks Dale, The walking sticks are beautifully done! Especially that carved one

Beyond our little machine as far as capacity though. With an indexer could the shapes on the top ones be done with the "Wrap" Gadget(just wondering).
Thanks for cutter link-Bookmarked! I only glanced at it, but saw "Lollypop" cutters and thought it might be a ball end plunge- I was THRILLED to find a 3/16"R that would make one of my designs feasible and got so caught up in the #'s and while I was thinking of cutting the shank down with my .004"kerf diamond blade so I can use it---I glanced at the # on the right----$231 HOLY S---!! Those were the exact words that escaped my mouth:)
That roof thing is VERY interesting! Roof is standing seam/terne coated and painted. How would I go about checking to see if it would work? We get a lot of ice so I have 4 rows of 33' galvanized pipe "ice jacks" over greenhouse glass that are screwed through roof sheets. Would that be my best bet(shorter signal run also?). Be neat to have a 3,800 sf multi directional antenna