Summary:
Get in the habit if creating a component that is the same size as your material. The component can have a thickness of 0.

Imagine that you are creating a plaque that has an oval dish as part of the design. For example: While doing the design I ran into an issue with software generated chatter on the border. Brian reminded me of the cure. I recall that James mentions this in his training videos.

So here is a refresher for those like me who have forgotten the cause and the cure of software generated chatter marks. I'll show the problem as well as the solution. 5. Make this into a component and close the Create Shape tool
6. Switch to the toolpaths tab
7. Select Create Finish Toolpath (the ellipse should still be selected)
8. Calculate a toolpath with a 0.25" ballnose at 8% stepover, raster strategy
9. Preview the toolpath
10. Zoom into the top of the ellipse and note the "chatter" marks. So what is causing the "chatter" to appear near the edge of the 3D machining boundary? Brian described the problem this way: Some of the near to edge points on the dish are below zero, as there are no points outside the dish, the tool can go a little lower at these points. A 'transparent' point is limited in height to the base of the material, so in effect you have a sharp vertical wall outside your dish. To cure the problem just model a plane for the material surface to subtract the dish from - this will ensure that the tool forms a clean edge at the material surface.

Allow me to paraphrase:
Imagine the router bit is like an ancient mariner sailing the known 3D world that was
defined by the ellipse. Beyond the ellipse is an area labeled "Here there be dragons". The Solution
The solution is to create a 3D plane that extends beyond the edge of the ellipse dish being carved. For example:
1) When creating a new project the first thing to do is create a rectangle the same size as the project.
2) With the rectangle selected choose the "Create Shapes from Vectors" tool
3) Choose the flat profile with a base height of 0.0

Now create the ellipse and the dish component. This time when you generate the 3D toolpath you will not see the chatter marks that were visible before. thanks for taking the time to put the explanation together and post it.

Your answer is very complete and stands on it's own. It will be a great post to reference people to when this question pops up again in the future, as we know it will. Thanks for the time and effort.

Randall
Very well done. Now what we need is a place to keep top tips accessible.
Dan
People go though many trials and tribulations. Some of them actually happened.
Top

Here there be Dragons

That is awsome!!
Great tip
Thanks!,
Nick
Top

Hey Gang,
You might check this out to see how to make nice clean sides. I think he may have some left but you would probably want to hurry.

Joe
Ham and eggs - Inconvenient for the chicken. A total commitment for the pig.
http://www.gripus.com/
Top

Yeah great stuff Randall. Thanks for taking the time to do a well set out tutorial.

I have not encountered this missing edges thing and I am not sure why I have not.

I just place the dished model. Put a vector around it to constrain the 3D toolpath and generate a toolpath.

I know that is not enough, but not sure why I have not seen the problem that always pops up on the forum and you are addressing.

I guess I do not understand one part, which vector do you use to define you toolpaths? A large rectangular vector, or the oval vector that created the dish?
Top

It depends on whether you want to include the entire top in your toolpaths or just the dish. Whatever vector you have selected when you calculate your rough/finish toolpaths will become the outer border.

In most cases, to get the best edge quality you would select the vector you want to use as your boundary, use the Offset Selected Vectors Tool to extend that out by at least the radius of the bit you want to use, then use this new vector as your machining boundary.

which vector do you use to define you toolpaths? A large rectangular vector, or the oval vector that created the dish?

In this particular example it was the oval.
- Randall Newcomb
Top

Well, it did keep the bit from falling off the edge of the 3D world <wink>

Just curious why James Booth's demo when toolpathing the oval did not have "chatter" marks? In this demo the oval is not sitting on any plane as such. Or am I missing something? 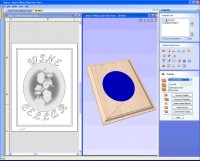 "He's no fun, he fell right over" - Firesign Theatre
Top

Just curious why James Booth's demo when toolpathing the oval did not have "chatter" marks?

James talked about this at the users group. The short answer is that the software chatter doesn't ALWAYS show up. Adding the additional component that is larger than the 3D carved area takes care of it if/when it does show up.
- Randall Newcomb
Top
Post Reply
18 posts