by TReischl
Those of us who have been around machining for a while know all about this and understand why it is done.

The other day I was cruising either this forum or another popular woodworking forum and I saw a picture of a setup that was just plain wrong. I was amazed. Then it dawned on me, there are lots of people getting into cnc cutting who have never worked in a shop or took any shop classes and would have no idea that what they were doing was wrong. So here is my great "tip" that is not really a "tip" but hopefully will help out those just getting started.

For those of you just getting started, the reason the top picture is wrong is because most of the clamping force is being used to clamp the riser block to the table, not the workpiece. Generally you should have the stud at least halfway between the work and the riser block and it is much better to get as close to the work as you can with the nut and stud.

This type of thing happens pretty frequently when a grid of holes with threaded inserts is used. What happens is there is just not a hole in a good spot. A simple solution is to use longer clamp bars that allow a bit more reach.

by Leo
I remember Force Vector Analysis from my college days.

YES - YES --- to me that is every day common knowledge - but not known to all.

Wish we could catalog some of this Knowledge base.

Leo wrote:Wish we could catalog some of this Knowledge base.

We did, unfortunately it's been lost, in my day it was called "shop class".

However, there may be good reasons to do it the "wrong" way:
- to get the hold-down bolt further away from the blank and clear the tool path or to "reach out" to a piece of wood that can not be moved closer.
- when using certain hold down clamps that have the bolt fixed in a position like the one below. Mechanically they may be less than ideal but I use them all the time and they clamp firmly enough. 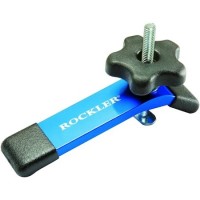 by TReischl
Tail, that clamp is supposed to be used with the short end on the workpiece. You probably knew that but I had to say it. I have a set of those that I rarely use. In fact, they are so rarely used they are up in the attic above my shop with the other stuff that looked like a great idea but then, well, those things were sort of like fishing lures that were designed to catch fishermen, not fish. I do have a few useless things that I keep on my shop walls just to impress folks that do not know any better.

The problem with "firmly enough" is when it is not. Then things get interesting and unkind epithets may be flung around the shop in a colorful stream.

The other problem with clamps like those is that they use toilet bolts. Not much variety in toilet bolt lengths. I use a track that uses 1/4 inch hex head machine screws. I have a variety of lengths to suit various thicknesses. A long time ago I made up a set that includes riser blocks, bolts, clamps and keep it fairly well organized. The thing about using a bolt that fits just right is that it reduces the chance of hitting it with the cutter.

by Tailmaker
I don't want to argue this too much because I basically agree with you. But e.g. for the Rockler clamps even Rockler's own pictures show them to be used with the long end on the work piece. Occasionally I have used them the other way round but they get really in the way (e.g. of the dust shoe) with the knob that close to the work area and I use them typically when I need the long reach. Anyway, while I use vacuum whenever I can, in some cases I find the Rockler clamps quite convenient. I do not like the similar Incra clamps, though.

I also agree regarding the cheap bolts. I have the 5/16" thread version and replaced all of the steel bolts with 5/16" bronze carriage bolts. They are less likely to mar my aluminum extrusion table and the heads fit exactly in the 80/20 slots.

by TReischl
I hear ya Tail.

Over the years I have become pretty jaded with folks like Rockler. Or should I say every now and then one of my eyebrows slides up near my non existent hairline?

What Rockler shows in a catalog does not change the laws of physics, but it sure helps them sell stuff.

But that having been said a lot of this depends on the surface the piece is being clamped to. Most of us use wood or MDF which has been surfaced leaving a much rougher surface than cast iron or aluminum. That results in less force being needed to keep a piece from sliding sideways. There is obviously enough downward pressure to keep the piece from lifting.

I actually got my clamping bars from rockler but they were not sold as clamps. . . 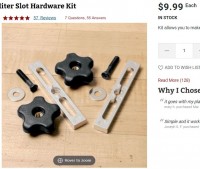 There were two in a package and at the time they were about $8 for two. So, I just bought bolts and use a wingnut instead of their big honking knobs. So they are a lot cheaper than those aluminum extrusions. And I have 16 knobs that i can use on other projects. I have a total of 16 set up in groups of 4 for different thicknesses that I commonly cut. Oh yea, those bars are diecast aluminum so they do not destroy cutters as a rule. If the machine is in rapid, yes, they break 1/4 inch endmills.

What I would love to find are those step blocks that are used in machine shops but made out of aluminum. I am not real keen about having steel on the work itself.

BTW, a difference in opinion is not an argument in my book, just a discussion where everyone might learn something, me included.

by Tailmaker
Yes, this is a good discussion. So why don't we go the next step and create an optimised clamp

Obviously there are already many good recipes around.
Part of that might be to just make the bar longer to get further away with the bolt and still have enough leverage.
Another effort could be to design better step blocks for wood router clamps, be it from Al, wood or plastic. I could even imagine a sliding swivel joint between the step block and the clamp bar.

At some point I made some wooden swivel clamps without protruding knobs and an optional feature to clamp the tip with a wood screw into the sides of a blank. But I guess that was a bit over-engineered... 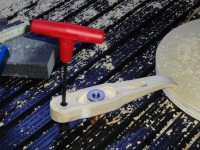 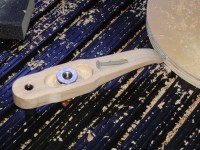 My full-surface anodized extrusion table is slick as pig snot and I need non-slip material between the work piece and the table no matter which clamp. I also have 3/4" spacer blocks with non-slip liner on both sides under the work piece where the clamps push down if I need to cut through the board.

by TReischl
Tail, that is a really nice clamp you made. I may want to borrow that concept for the mini mill. Thinking the press in tnut should be on the other side but I may not be thinking correctly. What I REALLY like is the screw in the end, definitely going to steal that idea. Often I want to clamp a part and surface the entire top. That works ok if it fits in the vise opening but a piece like 16 X 20? No go. What I have been doing is the clamp version of the teaberry shuffle.

What I am thinking is that I will drill and tap the ends of my existing clamps and then use an allen set screw sticking out about an 1/8.

Since I have a wooden surface I cannot use the jack screw method like you do, my top would pretty soon be all dimpled. I use that method on the mini mill and I like it.

About the best thing I have done so far for clamping is building a pair of matching vises. They will hold up to 6.5 inches. I do a lot of smaller stuff so vises work well for me most of the time.

by Rcnewcomb
My biggest complaints with the Rockler clamps are:
1. The bolts provided stick up too far and knock my dust shoe into the bit and/or the dust show moves the clamp. I wish they camp with a variety of bolt lengths.
2. If you torque on them too hard you can deform/twist/bend the bolt. I wish the bolts (in varying lengths) were made with less malleable metal.

Rcnewcomb wrote:My biggest complaints with the Rockler clamps are:
1. The bolts provided stick up too far and knock my dust shoe into the bit and/or the dust show moves the clamp. I wish they camp with a variety of bolt lengths.
2. If you torque on them too hard you can deform/twist/bend the bolt. I wish the bolts (in varying lengths) were made with less malleable metal.

What I am thinking Randy is that they are toilet (flange) bolts so they make them easier to snap off rather than cracking the porcelain? Never over tightened one to find out though. Since I doubt I will be replacing any more toilets in this lifetime I will not get an "opportunity" to find out either. Darn, what a shame!

by TReischl
This thread has gotten me starting thinking seriously about making my own step blocks out of aluminum.

I think I can gang them up in the vise on the mini mill and cut about 6 at a time using a 15 degree dovetail bit. I laid it out and there should be no problem with the collet nut interfering. May head off to the scrapyard tomorrow.
All times are UTC+01:00
Page 1 of 1