I can place 12 identical objects on one blank. I can fit 8 blanks on my table. I will fabricate a dedicated jig for material clamping.

As the object uses 3 tools I am hoping to set things up so all blanks with a total of 96 parts can be machined with just 3 tool changes.
Unfortunately there is no no automatic tool changer on my machine. I am aware of Aspire V.9 new array function. Because of the hold down situation and the shape of the blanks an even distribution with the array function is not possible.
Any clever ideas how that could be set up?

If I'm understanding what you're saying properly I don't see that you have any choice but to duplicate the parts by copy/paste (or the vector array copy features) and them position them by hand.

If you put the vectors for each of the toolpaths onto a separate layer before duplicating you can then use the automatic Vector selection (toolpath templates) feature of the toolpath to associate with those layers so you only need three toolpaths.

You can then calculate in one go with the recalculate all button after positioning.
Top

Not sure if this will help in your particular case....but

When we first started buttons we tried setting up 3 blanks at a time(4X24") with mixed results.
Eventually wound up going with one jigging that made blanks a 30-60 second swap out, zeroing to the spoilboard right next to the same bolt every time(made it home position in the file), and simply changed the bit and zeroed, then ran the same toolpath with all six blanks, then swapped bits and repeated the new toolpath for up to 4 tools.
Replay Recent command/enter/enter, and from cutting to cutting again was almost never more than a minute:)
Even .08" buttonhole countersinks were accurately placed if done the same day.
Made 180-360 buttons a day....and then did the same with keyfobs.
Toolpaths varied from 20:00 to 4:00, but swapping out blanks was easy.
Spoilboard and blanks had to be flat, Flat,FLAT and as close to identical as possible

Hope this is pertinent and helpful.
scott

I'm a big fan of the merge toolpaths option when I've got a small production run to do. Makes an easy way to combine all the toolpaths that use the same bit.
Top

Not my jigs, but always liked these:) 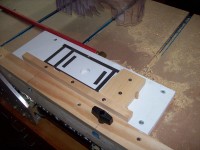 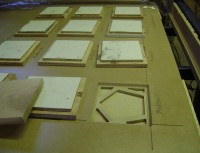 Secure a piece of MDF to your machine and make a jig for your multiple blanks. Then go to town cutting.

It is like making an female inlay for your blanks. Make sure you "dog bone" fillet your corners so that your blank fits.

I did this when v-carving and pocketing some corian and it worked great. I was able to cut 10 blanks at a time with the one tool change.
Top

I second the fixer dude. If you create your jig using aspire, then you already have the exact shape of your jig. I've done this before, and it works splendidly.
Top
Post Reply
7 posts • Page 1 of 1