not a tip but a question

When I tried to import it into Aspire, nothing.

I then loaded it into Corel X6. No problem.

Turned off the interior fill. The outline vectors were NOT turned on (they had no color assigned).

Set the vectors to black and imported it into Aspire. No problem.

Interestingly enough, I then created two vector shapes in Corel, set the outline of one of them to nothing and filled it. They both imported correctly.
Top

It will load when re-saved from any of the vector programs (without changes) that I have but the original won't load. The EPS version is changed to whatever the other program uses.
Top

Opens fine in Adobe Illustrator. I saved it as a PDF in case you want to try that...

I have modified the eps importing to be able to import the file for the next release. The issue was that it had a "%%DocumentProcSets:" line which we normally expect to refer to an external file which wasn't present and hence we thought we couldn't read the file. However the file also contained a "%%DocumentSuppliedProcsets" section which we were not checking for, that specified that the procset was included later in the actual file.

Thanks Brian, Is there any chance of a patch for Aspire 3.5?

Adrian, you are correct that to get it into Aspire you only need to open the file, MAKE ZERO CHANGES TO THE JOB, and export again.
You are also correct about Xara. I forgot that I still have X1 so tried it and it gave me the same as it gave you.

TR, there is no need to add an outline colour or to turn of the black fill. For that matter some programs will import the ouline colour as three vectors, One for the original vector and one each for the inside and outside of the pen thickness.

As an aside, has anyone else noticed that when exporting EPS vectors from Aspire into Coreldraw (I havent checked with other programs) that the vectors are not closed?

GraClay wrote: As an aside, has anyone else noticed that when exporting EPS vectors from Aspire into Coreldraw (I havent checked with other programs) that the vectors are not closed?

Yes, I get that all the time when export from Aspire to Xara.
Top

GraClay wrote: As an aside, has anyone else noticed that when exporting EPS vectors from Aspire into Coreldraw (I havent checked with other programs) that the vectors are not closed?

Yes, I get that all the time when export from Aspire to Xara.

I've never, ever had that problem with EPS files when exporting from Aspire and then importing them into Corel...and I do it rather frequently. I still use Corel X3 most of the time, but also use the most current version X6 (I don't like the new icons in X6...they are more clear to me in X3). I've not used Xara, so can't give any feedback on that.
Michael Tyler

Michael, that's interesting because when I've exported EPS from Aspire to Coreldraw the vectors have remained open everytime.
This includes vectors that were created in coreldraw and were closed shapes in the first place, opened in Aspire then exported.
To see it in Coreldraw you have to fill the shape of course and turn the view setting to "enhanced" or the completely useless "normal".
On my systems the Aspire EPS files, the fill will always be empty and the outline will be filled unless I select properties and select "close".

I just did a couple quick tests...

1) I created a closed vector shape in Aspire 4 and exported it as an EPS. Upon import into Corel X3, I saw that it is indeed an open vector like you described!

2) Then, I did the reverse...I created a closed vector shape in Corel X3 and exported it as an EPS. After importing it into Aspire 4, the vector shape remained closed.

Scenario 1 NOTES: Scratching my head a little now. I often will export vectors from Aspire as EPS, but then immmediately after importing into Corel, I re-export them as DXF R14 so I can import those vectors into the CarveWright software. During that process, the CW software has an "Auto-Join" feature and may have "masked" the open vector issue from me, unknowingly (I guess). I discard my Corel file most of the time after the EPS to DXF conversion, and am not applying a fill, so again, might have shielded the issue from me all this time. For those who may be wondering why I don't just export the vectors from Aspire (or VCP) as DXF in the first place for prep to take into the CW software, it's because I can manually select the R14 format when I export the original EPS to DXF...the CW software seems to "like" the R14 format and I get consistently good results with that (i.e better than a direct export of DXF from Aspire or VCP).

Scenario 2 NOTES: For some layouts, I will create vectors in Corel, then export those to EPS and import into Aspire or VCP. No problems here...the closed vectors seem to remain closed for me, so that's good.
Michael Tyler

Correction... when exporting vectors as DXF from CorelDraw, I actually specify AutoCAD 2004 DXF format (NOT the R14 like I used to do). Had a memory glitch between my ears...I forgot that I had switched to the AutoCAD 2004 format long ago, and Corel "remembers" my setting automatically. (Jogged my memory this morning when I did some exports and noticed the AutoCAD 2004 setting which I had specified ages ago.)
Michael Tyler

I noticed recently that the DXF export in Coreldraw is now quite acceptable rather than in previous versions that created a gazillion straight lines.
Not sure if it is because of the macros I've loaded into Corel that's done it or if it's the native export DXF but it is from the normal export function tool. I'm using X5.

I have always avoided the DXF import from Corel for the reason you stated. But since you are now having good results (fewer vectors), I gave it another try using X6. The attached is a simple ellipse, a gazillion vectors! 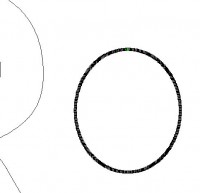 Looks like it may be the macros you added to Corel.

When I import EPS into Corel from Aspire, some of the shapes are closed, others are not.
Top

TR, since my post my Coreldraw is exporting the same as yours i.e. a gazillion points.

I guess it WAS the macros.