Interesting, thanks again for the input Ron and Mark.

These people at this mall from what I can see are usually none too busy, when I walked in both looked very glad to see a potential customer. There are 2 hat embroiderers, there used to be 3 and from what I have heard, even one of the hat guys told me that was the guy I needed, he took on custom projects. But he closed up shop a few months back, and probably a matter of time before 1 or both are forced to move on if they don't expand their horizons a bit. I can see not wanting to do a snake wrapped around an eagle in a thunderstorm on Jupiter, we all know intricate designs can take alot of time to do. But something simple like mine, a distressed flag with numbers line drawing, should be well within their capability. If people wants a sports logo/ rock star cap they have limitless options, from Targets to online, and probably cheaper than they can sell them.
One off designs can be their niche, possibly their ticket to survival. I'm willing to bet that almost all of us here, like Ron, would have long ago offered custom service, this day and age you simply cannot turn away too many customers. Once my union coworkers see my custom hat, they are going to want one, so this could have been their ticket to dozens of sales [I made up some custom tshirts on a huge job a few years back, they were selling like hotcakes. I paid $12 each and was selling them for $25, I had guys standing in line to buy them. I sold a batch of 20 then ordered another 30. Most of the design was my own but I used a union bulldog and some lettering that the union uses. I wasn't really thinking, my steward came up to me one day and asked me to "keep it on the downlow", he explained the big boys at the hall might get upset with me selling bootleg union merchandise. I said huh what, he said the bulldog was copyrighted, MRCC was copyrighted, 687 was copyrighted ect. He didn't specifically tell me to stop but he was uncomfortable with it, so I sold off my remaining stock and stopped]

I still occasionally make my own designs but they are truly one off, just for me and I try to stay away from their logos. If guys like them I just tell them where they can get it done. Union offers their own merchandise as I said, but lately last couple years they have nothing but generic junk, they really need to hire some kind of designer with an imagination, thats why I am forced to create my own.
Doug
Top

BillK posted a beautiful project. See the attachment. Would this type of project display well with edge lighting/ 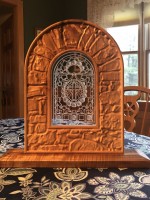 In theory, yes. The way it is now, hard to see how you would get a led strip under the plexi to light it, frame might need to be redesigned and cut to make it work. Or better yet, with precise depth control it might be possible to rout out a slot under the plexi by hand without it showing through the front, no way to tell for sure if thats possible just looking at a pic. If its less than .5 thick it wouldn't work.
Doug
Top
Post Reply
18 posts