I've had a couple of pointed roundover bits, Whiteside 1572 & 1574 for a while. I've shied away from using them due to tool marks on the side and top of the piece. The top marks are from the outside square edge marking the top. The side marks are from the bits seemingly cutting too far inward on a profile. I've tried raising the bit a hair, but that leaves a flat spot on the top of the workpiece. I've also tried moving the bit slightly out from the profile cut. That makes a better cut, but not perfect.

Do I just need more testing for the bits to get it correct and tool mark free? Am I doing the setup wrong? I started this thread so as not to hijack another thread Prototyping http://forum.vectric.com/viewtopic.php?f=2&t=33759. I always see such nice work with the pointed roundover, but I've had less than spectacular results. 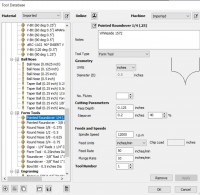 Yup. Working with one of those pretty much demands that you mill the top surface flat in place on the machine.

The other critical thing IMHO is to use a tool touch off plate to set the tool height. Zig Zag paper, feeler gages, sheets of paper just don't cut it when it comes to getting that radius to blend. Then, there is the issue of manufacturing tolerances when the bit is made. Might have to adjust the theoretical dimensions posted by the manufacturer.

I guess another way to go at it is to cut a bit too deep and then flatten afterwards with a flat bottomed tool, end mill, tray bit, etc.

Edit: Getting these to run well has all the same issues as a plain old roundover bit.
"If you see a good fight, get in it." Dr. Vernon Jones
Top

I figured there was no magic answer, just hard work. I've just got to spend some time with it. Sometimes I just get too antsy for my own good.

I normally flatten my stock in a drum sander and have calibrated my puck.
Top

Gerry,
We used the 1572 to cutout/roundover a LOT of buttons and keyfobs, and because it doesn't come to a true point it worked wonderfully for us(better cut than the same dimension Magnate with a true point for me at least).
BUT I was just beginning pretty much, and drew it like yours, and I'm lazy so never drew it exactly

I just knew never to use it if material was thicker than .235" (?)...Pics are .20 and .23" thick Ocooch stock.
(To get a sand free finish took a lot of putzing, but eventually 9 passes progressively shallower, got the finish shown, and only had to soften bottom edge)

Maybe try drawing it accurately with the approximately .03" flat would make preview more accurate?
I just drew it for outside the line cuts for our use(crib boards were faster rounding over with the laminate trimmer with a bearing roundover).
IF trying for a round bead like Gary's beautiful sign....You probably will be using some scrap up:(
Just mentioning,
scott


DO have to haul my 5 Magnates out and test now that I know more!
"One accurate measurement is worth a thousand expert opinions"

Aside from accurate material thickness and flatness, the accuracy of the form tool profile in the software is pretty important. So is getting to know your cutter so you know "exactly" how deep you can go with depth of cut to get your roundover completely without marking the top of the material. Testing is the only way to fully appreciate that in my experience. I know that with my particular .25" roundover, 3.1mm is about as deep as I'm willing to go, leaving a scant .07mm that can be addressed while sanding the workpiece after cutting. If you're cutting "on" the line with the profile tool path you shouldn't get any marking on the side of the cut if you are not exceeding the ideal depth for your particular cutter unless your form tool profile drawing in the software isn't accurate.
Top

An effective way to get to know your roundovers and how they work on your setup is to start with the bit higher in the Z.
Cut and observe.
Lower the Z a small amount
On the same piece, cut again and observe.
Rinse and repeat until you ar actually cutting deeper than the radius of the curve.

Here is a discussion by Joe Crumley on the ShopBot forum: Humble Little Roundovers

Take the time to understand the root cause of the problem areas you see on your cuts.

There were a few things I noticed on my prototype:
1. My material was not being held flat due to improper clamping. This is most noticeable on the letter "S" with the appearance of the raised portion in the center. However, this may come in handy in the future if I want to have a raised island of material in a future design.

2. It was also not clamped enough to keep from vibrating while being cut. The vibrating material also explains the chatter you see of the curve of the S.

3. The crossbar on the T was too thin for the roundover which caused the center to be overcut. This can be fixed by editing the shape. 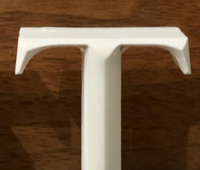 4. Again, because of ineffective clamping and because I didn't flatten the material once clamped, the raised areas at the bottom also show artifacts rather than meeting perfectly with the radius

5. The triangles on the inside corners -- I need to edit those to put a fillet to match the radius. I still want to keep the sharp outer corners.

- Randall Newcomb
10 fingers in, 10 fingers out
another good day in the shop
Top

This is all good info. Definitely getting filed away.
Top

I just setup and used that same tool. I set it up as a 1/16 end mill, It worked great
Will Williamson willcnc.com willmade.com
Williamson Lumber & Millwork Inc.
Capac, Michigan
Top
Post Reply
9 posts • Page 1 of 1