I was trying to reset my Z axis after changing a bit and accidentally hit the "View A" on my pendant. The display changed from Z axis in the top left corner to A axis and the number changed from the height of my bit to 0.0
In my confusion, I adjusted the A axis to 1.2, then backed out of it and ran a 3d roughing file.
It cut way down into the wood and I stopped the program and re-zeroed the A axis and reset my Z axis as well.
Can anyone explain what happened?
Top

From what you wrote it sounds like you corrected the issue.

As to what happened? You pushed the wrong button.
"If you see a good fight, get in it." Dr. Vernon Jones
Top

TReischl wrote:From what you wrote it sounds like you corrected the issue.

As to what happened? You pushed the wrong button.

Ahh yes, I did figure that out. I was wondering if anyone could tell me what the A axis is for?
Thanks

Typically the A axis is a rotary axis.
Top

Just guessing, but I assume the A-axis is anything secondary to the Z-axis.
On my CNC I have two heads - I just have to change my G-Code from Z to A and the program will then run on the 2nd head.
Convenient for me to combine my output code using different bits into a single file - no bit change necessary...

In the vast scheme of things the letters A, B, C, X, Y, Z (could be lots more) are just labels that say which motor is being addressed.

Example, on my machine A axis is paired with Y axis to drive the gantry from both ends most of the time. However, when I do rotary work the Y axis is locked down and A axis is the rotary axis.
"If you see a good fight, get in it." Dr. Vernon Jones
Top

"Ahh yes, I did figure that out. I was wondering if anyone could tell me what the A axis is for?
Thanks "

The real answer to your question is: "Depends on what your controller thinks it is" And, the answer, especially with low end controllers, can and will vary depending on how the control software has been written. In many cases the authors of these control software programs take some liberties, mostly to simplify for their userbase.

First we must differentiate between motor control channels and true axes, with axes being a defined direction of motion that may or may not have multiple motors. In Ted's case above, his controller uses the "4th motor channel" (which is controlled as "axis Y") and calls it "A". Other controllers call their second Z axis A, while others use "A" as the designation for a rotary axis. Of course, "B" is often used as a rotary axis on other controls.

Here is a graphic showing the industry axis convention, which must be adhered to when one uses a high end 4-5 plus axis CAD/CAM solution. In the lower end controllers, as you can see, liberties have been taken. Usually to simplify or lower cost. Of course, the X, Y and Z are followed by all controllers. U, V and W are the second linear axes (when separate control is needed) that provide motion in the same directions as X, Y and Z.

Depending on the controller, each of these axis designations could have multiple motors assigned to them, and they would be "paired" or "slaved" either by hardware or software. Hardware pairing simply connects the step & direction signal from one axis to two stepper drives. They are given the same signal, always. Software pairing provides 2 independent motor channels to a single axis and affords additional features, such as independent auto squaring or other features where adjustments may be needed between the 2 drive motors.

A, B and C are rotary axes that rotate around X, Y and Z as shown below. As you might notice, if convention is followed, a 4th axis rotary device could/should be called A or B, depending on its orientation (X or Y) or C if vertical. The "second Z axis" could/should be called "W". This seldom happens in our world as those who develop lower end controllers seem to chose a designation that either makes sense to them either for ease of use. In any case, they can (and do) call them whatever they wish, cuz it their stuff. 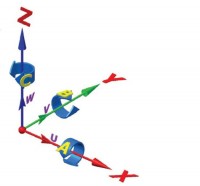 Has zippity do dah to do with whether a controller is "lower end" or not.
"If you see a good fight, get in it." Dr. Vernon Jones
Top

TReischl wrote:Has zippity do dah to do with whether a controller is "lower end" or not.

Cute. Last time I heard those lyrics were from my grandfather. He knew the whole song. Unfortunately he was senile and didn't know who my grandmother was. But he could sing that song.

You may not have noticed, but that was the exact point. For the most part the high end controls are very rigid in their axis designations. Lower end controllers on the DIY and sub $40K routers take liberties. Liberties or kludges that allow a lower cost controller to imitate features on controllers that have 6 or 8 motor channels with 5 or 6 axes of simultaneous motion. We seldom need most of those features as we seldom provide motion to more than 3 at a time.
Gary Campbell
CNC Technology & Training
The Ultimate Woodworking Machine
GCnC411 (at) gmail.com
Top

They are just labels, nothing more. How the outputs on a control are labeled does not determine whether it is a high end control or not.

What you are speaking of are called conventions or standards. We have a standard in this industry of LABELING the axis that controls the movement of the spindle in a linear direction parallel to the centerline of the spindle as Z axis. The first primary axis that moves perpendicular to the Z axis is known as X, so on and so forth.

Where you get the idea that so called lower end controllers "take liberties" and "kludge" things up is beyond me. That is like saying a lower priced car is taking "liberties" and is "kludged" because they do not build to the same standards as mercedes or rolls royce.

BTW, "kludge" went out of common usage back in the last century. Pretty soon you will singing that song.