Thanks for the replies people, I think I will go with just a bad bit of wood as it seems it could be the case

Not a big fan of sanding but if that is what is required then that is what I do, while I have obviously had marks in the wood in the past I had never seen anything this bad comming off the machine. Not that I have cut huge amounts of wood

, I have cut a few different species but can't say I have cut huge volumes of anything. This was Beech & I have machined it a few times in the past & had good results, never at this sort of thickness though.
Maple is actually not so easy for me to get hold of where I am in Scotland but I don't tend to buy wood from Timber Merchants anyway. Most of my wood comes from a Local Sawmill as Kiln dried tree slices. The Sawmill source Scottish timber & also operate a sustainability policy. I was actually going to use that as one of my selling points, the fact that the wood I used came from Scotland from a sustainable supply.
So they seem to have Oak, Elm, Ash, Beech, Birch, Sycamore, Lime, one type of chestnut (which varies) & Yew all the time. Then they sometimes have something else, I have bought Cherry, Hornbeam & London Plane that I can think of, might also have been something else. Obviously Yew isn't a hardwood but I really like it & it's better than a lot of hardwoods

NOT big or deep wood Martin....and not really cost effective for most....but thought I'd mention.
When first doing round buttons(.2-.22" thick on 4 species)...we were after production times and just prototyping and only looking at machine times.
On 2015 before we swapped to HDO and a 2 tape method....the protos made sense even with "Bad" spots at 45 degrees to the grain on the cutout. 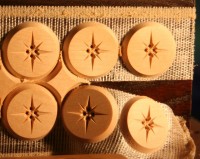 There really weren't THAT many protos to sand, and slight differences in diameter didn't seem a big deal.
THEN we started selling and I trained up my Dad's old secretary(who had to quit office work because of a stroke) to finish buttons,and found the Bad spots on 2 species took 5 times the amount to sand, AND weren't always uniformly round!
Had a 20% reject rate, as Dad would not sell "Seconds".
I WAS cutting in 4 passes with a final pass of .01"
Played for a few days 3months after first pic, and found 9! spiral passes, with a final pass of .001" had NO bad spots 99%+ of the time.

We went from 2-5 minutes sanding on the Foredom with a detuned flap wheel......to an average of 30 seconds per button

NOT practical for most to do a "Finish" pass depth on thick stock, but when I'm doing One-ofs...I always pick a sharp bit and remember that.
NOT sure it would have made any difference on that piece....but if an extra 4-8 minutes on the machine would have saved that sanding?
Heck...I'M LAZY

I looked for better close up pics, but couldn't find any:( Zoom pic and you should be able to see the difference

Sitting in a hotel room coming up with nutty ideas. Not at all sure if this would help, but seems if you cut a series of scallops along the finish curve first it would prevent or lessen tear out.

ger21 wrote:...........We used to make some parts where we used a right hand bit for one half, and a left hand bit for the other half, to guarantee we were never cutting against the grain. That's the only way to totally eliminate it 100% of the time.

Dang, I am late to the discussion.

To add to ger21's suggestion of a left hand turning bit (which is difficult to get): The same effect can be achieved for pure 2d cuts by flipping the part over and cutting the problematic section from the other side. What is "against the grain" for the top becomes "with the grain" for the bottom. Obviously, the closed outline vector must be segmented and cut as open vectors accordingly.

Unfortunately that is of no use for 2.5d and 3d cuts.
Top

As mentioned in this thread routing uphill on wood grain is an issue.

When I hand-rout binding channels for acoustic guitars I follow this type of pattern in order to always be cutting downhill. 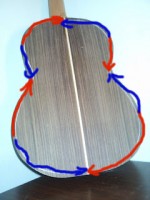 - Randall Newcomb
10 fingers in, 10 fingers out
another good day in the shop
Top

While you are climb cutting when going "downhill", the bit is still spinning in the same direction, and can still tear out. The router is moving downhill, but the bit is still cutting uphill.
Gerry - http://www.thecncwoodworker.com
Top

Scott, I would call that a "Gold Nugget" of CNC info - thank you.
Maker of sawdust
Top

ger21 wrote:While you are climb cutting when going "downhill", the bit is still spinning in the same direction, and can still tear out. The router is moving downhill, but the bit is still cutting uphill.

This is the point I was trying to make with reversing the rotation of the cutter. You would need a left hand cutter to do that and the ability on the spindle to rotate CCW M04 - which I believe is as rare as a unicorn on a CNC router. This is not to be confused with a down spiral. Upspiral or down spiral is still a right hand cutter that uses M03 cw rotation.

It's just not a practical solution on a CNC router unless it can rotate CCW M04. Then the router would need to recognize grain direction.
Imagine the Possibilities of a Creative mind

The whole problem is more easily understood if one thinks about a diamond shape (square rotated 45 degrees).
"If you see a good fight, get in it." Dr. Vernon Jones
Top

This is unfortunately a common thing with many pieces of wood no matter what the tool being used to cut it. One thing I've been doing with CNC when cutting things like this is to use an allowance that incorporates a final clean-up pass of minimal thickness to help eliminate tooling marks. That may or may not help with what you show which is evidence of tear-out. As was mentioned, sharpness, direction of cut, tooling RPM and speed of cut matter, too. Sometimes varying any one of these only slightly can improve cut quality.
Top

I could be that the wood has some squirely grain patterns. I've had this happen on some types of wood where the grain is all over the place. It has happened using both razor sharp hand tools and powered tools. Depending on what I'm doing, I look closely at the grain pattern to make sure it is going to machine correctly.
Top
Post Reply
26 posts