Ok, this might be a crazy idea, but it's something I could actually use: I use clean-up passes after some 3D cuts to get rid of the small "dents" around sharp lines, and in some cases it could be an advantage to run these passes before the 3D fine cut. This means that I would have to do it after the rough cut, and the cut depth can make the smaller tools chatter a bit. So my idea was to apply the tool path to the surface, set the start depth to 0, the cut depth to a negative value, then create 2-3 toolpaths that will cut to the final depth a bit at a time. However, it seems like Aspire doesn't like negative cut depths, it simply changes it to a positive value when I calculate the tool path.

I could make some raised "helper surfaces" and apply the toolpaths to these, but it would be easier to run them at a negative depth. Is there a way to do that? It could actually come in handy for some other cuts, like roughing and fine cut, so maybe this is something that could be incorporated in future versions (kinda like the "allowance" you have in some tool paths)?
Top

Not sure it is totally crazy, maybe just a little.

Seriously, I get what you are trying to do. And sometimes I do something to achieve what I think is the result you are looking for.

What I do not get is the "negative" part of this thing.

Isn't the idea to reach the final depth?

Ok, what I do depending on what I am actually trying to accomplish.

If I am just running around the outer boundary of a model on a flat surface I use the vector, assign a profile tool path using the Ramp/Spiral option. That way the tool works it way into the piece. All that I need to do is set the final depth.

The "problem" starts when the tool path has to follow varying Z depths as it goes over a modeled surface. If it is really important to do it before finishing than I use the following which totally sucks because it is a lot of fiddling around and air cutting. On the machine control I change the Z zero setting so that it is above the workpiece by however much I think I should start at. Run profiles. Lower Z zero some amount, rerun profiles, wash, rinse, repeat ad nauseam. Like I said, it sucks so I have maybe done it three times in 12 years.

It would be great if the Ramp/Spiral option actually worked the same way it does normally when the project onto 3d surface is selected. Oh well!
"If you see a good fight, get in it." Dr. Vernon Jones
Top

I’m thinking you might be confused on what a “negative” cutting depth would be.

If you are wanting to make incremental depths passes down from the top surface of your material, then of course that would be Positive depths (not negative).

Am I completely misunderstanding what you are wanting to do??
Michael Tyler

Lower your spindle down the amount you want to cut, then set it as zero. Don't change anything in Aspire or the toolpaths. Wouldn't that accomplish what you're trying to do?

Every once in a while, I'll get some fine ridges, a few thousandths deep, on my finish pass, which is a result that I set the ball mill at zero, but wasn't the same height as I did for my roughing pass. If that happens, I lower the finish mill down the few thousandths, set it at zero, then run it again. Problem solved. I don't have an automatic tool changer, so this happens more than I like.

The start depth in a projected toolpath is defined as the model surface, so this may be a better way to explain it:

A simple 2D toolpath will cut from the start depth to the cut depth. If you project the toolpath to a 3D model for a single clean-up pass, you have to set both depths to 0. This generates a single pass that starts at the model surface but won't cut into it. Now, if you imagine the start depth being (for example) -0,100", the cut depth 0 and the pass depth 0.010", it would start the first pass at 0.100" above the model surface and incrementally cut down to the surface 0.010" at a time. Not sure if that makes sense, but that's basically what I'm after.

There are ways to work around it, and re-zeroing would be one way. However, since I'm working with production of several similar parts at the time it would take way too much time. It would be much more convenient if I could incorporate it into the tool paths.
Top

This picture shows what I want to do. The outline of the checkering will have a tiny "saw tooth" pattern after the 3D cut, and the clean-up pass will remove them. The way I have it set up now is to set an allowance so I'm actually cutting into the edge of the checkering by just a few 1/1000", but the 1/16" ball tip I use is long and slender so it will still bounce and chatter a bit. I would like to make this cut incrementally instead (and possibly after the roughing pass), as I figure it will make a smoother cut. 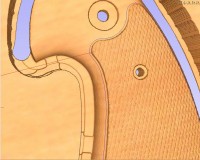 Olle wrote:This picture shows what I want to do. The outline of the checkering will have a tiny "saw tooth" pattern after the 3D cut, and the clean-up pass will remove them. The way I have it set up now is to set an allowance so I'm actually cutting into the edge of the checkering by just a few 1/1000", but the 1/16" ball tip I use is long and slender so it will still bounce and chatter a bit. I would like to make this cut incrementally instead (and possibly after the roughing pass), as I figure it will make a smoother cut.

Sometimes, rather than fight the machine it is better to make a design change.

I just looked at some of the grips on my handguns. Not a one of them runs the checkering out to an edge like that.

They have the raised area like yours. But then they establish a border inside of the raised area outline and checker within that area. In other words, the checkering does not run out into space. Now that I think about it, that is a good idea to prevent chipping along that outer edge. It also makes it very finished looking.

None of mine are cheap btw. Lew Horton, etc.
"If you see a good fight, get in it." Dr. Vernon Jones
Top

It's not an ideal design, but I'm making reproductions so I can't make any changes. I'm kinda stuck with this, so the problem is to find a good way to machine it without killing myself when I sand it. A nice, clean edge saves a lot of time.
Top

phill05 wrote:Ollie,
After you run your roughing and finish toolpath select the vector going around the raised part you want to clean offset it into the work say a few 1/1000's as much as you need to clean off, then offset the vector outwards the thickness of the cutter tip plus a few 1/1000's, select the model plus the two vectors do a finish toolpath between vectors, job done.

I'm not sure if that will do what I want to do. Any finishing toolpath I have tried will leave small "bumps" in places where the tool changes direction or doesn't follow the line exactly. The best way I have found so far is to offset the tool path a few 1/1000", let it follow the line and just shave a little bit off the edge like in the picture. Right now I have it set up to run two clean-up passes after the finishing cut. but it still leaves a few small bruises now and then. The harder the wood is, the more pronounced it gets.

It may not sound like a big deal, but any bump along this line will stick out like a sore thumb after finish. I usually hand sand it to smooth it out, but it's very tedious so I'd rather find a way to make a perfectly clean cut. This is why I'm thinking it needs to be done before the finishing pass, I suspect that cutting it as a groove and just a bit at a time will result in less chatter than just cutting on one side after the finishing pass.
Top
Post Reply
10 posts • Page 1 of 1