Inlay: Never Get it Right

Inlay: Never Get it Right

I am having such a hard time getting an inlay to work, and in fact, have never gotten one to work. I've gone through the Zank and Durrant Procedure for Designing and Machining V-Inlay Projects, and watched the Vectric video on the subject, and still a dismal failure. I'm using an up-to-date version 10 of VCarve Pro on a Shapeoko XXL.

The Vectric video at https://youtu.be/l_QoZpI4als, "Tips & Tricks | VCarve Inlays | Vectric" has a V-Carve/Engraving Toolpath graphic at 8:54 that shows:

My settings in V-Carve/Engraving Toolpath are:

I glued it with a lot of Titebond II, left overnight with 30 pounds of cement blocks on it, then cut it off with a Japanese saw. The inlay is 5.75 inches by 4 inches.

What I get is a deep female and a wafer-thin male which doesn't fill the pocket at all (yes, I understand that it's not supposed to go to the bottom). The thickness of the male, inlaid part, ends-up around .07 to .08 inches, and the thickness of the excess that remains on the male backing after cutting it away is about .13 inches, so the entire male is probably .2 or so (I didn't measure it before I glued it in though). The depth of the female pocket is very deep--far deeper than the male part--but of course I can't get in there with the calipers to check. Nonetheless, I'm going to guess it's in the neighborhood of .25, which means it could be .2 or .3. In any case, I'm far from bottoming-out, and clearly the male is not getting into the pocket far enough. I had been running tests with pine on pine but thought the soft stock might be the problem, so for this one the stock is Toon inlaid with Brushbox, just scraps I had laying around. I'm looking to do this inlay with primavera set in monkeypod, that that's about $45 worth of wood and the last of the wood that matches the rest of the piece, so I need to get it right the first time. What am I doing wrong? Photos attached.

I'm no expert but I've been using VCarve and the Shapeoko for 18 months mostly for intricate, decorative carving, and generally have pretty good luck. I just can't ever seem to get inlays to work.

In this example I would have expected a start depth of 0.2 and flat of 0.1 for the male inlay part. That would give you an inlay thickness of 0.2 and a gap under it of about a tenth of an inch.

Of course, I am often wrong.

Dave, which version of Z axis do you have? Belt or HDZ?

Getting V-Inlays to work properly on a Shapeoko takes some finessing to get the pocket and inlay to come out correctly. I had to approach the inlay with additional steps to get consistency and quality.

Following the video settings exactly is beyond the capability of the Shapeoko. The reliable average max DOC is ~.1-.125" on average, expecting anything beyond this with the machine is introducing errors in the work piece. The Shapeoko won't reliably cut the full DOC on the male inlay piece, as the total DOC in the video for the start depth and flat depth is ~.3". With the HDZ you can push for more DOC, but you still have some rigidity limitations with the V Wheels and belts.

There are some good threads and instructions here on the process. I would recommend starting out with something basic with scraps until you get the hang of it then work towards something more complex. Don't be afraid to cut your test jobs in half to see how the inlay fits in the pocket and if you are getting errors.
Top

Thanks so much for the comprehensive replies. Yeah, I've still got belts. I was also wondering whether the fact that the inlay has such irregular, detailed margins has any effect on the cuts, but in any case, the .07 thick male inlays were really disheartening. Again, I appreciate the help and will give it another shot next weekend keeping in mind what both of you said.
Top

Dave, I've cut a bit of plastic-to-wood inlays with both 60 and 90 bits. The one thing I learned real quick is to set the "pass depth" in Cutting Parameters to something about 1/3 of the total DOC for the inlay.

My Shapeoko XXL doesn't like the way that Vectric Vcarve Desktop plunges to the max depth when vcarving. That move tests the workholding on the part being cut.
Crooked Wood Products - Custom Wood
Truth lies dormant in our future history ― Tex LXVIII
Top

Not having any experience with your machine it's difficult to comment but ElevationCreations points out some of the weaknesses with the machine, doesn't mean your machine can't do this job it just means you need to think a bit more carefully about your speed, feed & DOC settings.
I would make a couple of small test files & machine those from the same piece of material using different speed, feed & DOC settings, keep notes on what you are doing so you can look back at what you have done with each

From my notes for when I do the v-inlays, mine are reversed...
Male
Start Depth 0.2
Flat Depth 0.1

Female numbers are the same for me.

Actually, for the Zank Inlay approach, your start and flat depth settings for the male piece are exactly the reverse of what they should be. It may not be intuitive without going through the appropriate diagrams; however, the flat depth used for the male piece defines the gap between the top surface of the female piece and the beginning of the waste material. The male start depth defines how deep the inlay piece will fit into the female carving. The difference between the female flat depth (0.3" in your example) and the male start depth (0.1" in your example) defines the "glue gap"--the interstitial space between male and female pieces. So, you most likely wound up with a glue gap of 0.2" and an inlay depth of only 0.1".

As FixitMike and others have pointed out in the past, the original Zank settings lead to an excessive glue gap--you don't need a 0.1" gap (much less a 0.2" gap!.

(Note added: While I was typing out the information above, Mitch also posted the correct answer a few minutes ahead of mine. )
Top

Repeat post of my picture of how the settings work.

This is great you guys. I can't wait for next weekend to do some experimenting.
Top 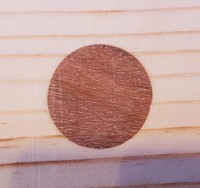 Glad you have it working.
Aspire, CAMaster Stinger II
Top

I'm glad the project worked out anyway, but using my original numbers did give you a larger glue-gap (0.1") than you need.