Does this happen often?

Does this happen often? 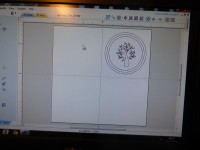 I can understand why some people reach a point of frustration and are tempted to abandon CNc and get involved in some other hobby,
Hoowever, I have always lived by the motto, Sheer determination., and thi s has served me well over the years,
So now to the point .
I wanted to make a nest of coasters as an exercise in producing something nice and useful.
I append a few photos .
M5 is the result of a single coaster as a proof. I was happy wth that so moved on. this is how it developed.

M1 is the first idea, I created it in the centre of the work area.
M2 is when I copied it, moved it to the corner and psted it there
M3 is of the copied and placed the other three to make use of one piece of timber and to makeeach toolpath run for all 4 pieces.
M4 is the preview of what it would look like when cut out.
I was happy with that so did the cut.

The final result is M 6. initially I made sure that there were no obstructions for the bit to run into and there was clearancea ll round the work area, I have only a Piranha FX so space is limite indeed. I also just stopped the router while changing bits but went back to the home point before strting the next cut.
So what went wrong? any help or suggestions will be more than welcome, and so thanks in advance.
Top

Looks like you lost steps somewhere along the line or the XY position was out during the bit change. As the error looks the same on each part rather than getting worse I'd lean towards something going wrong at the bit change. You did just reset the Z and not the XY as well? It could be that the machine hit a limit on the XY and lost steps.
Top

I also just stopped the router while changing bits but went back to the home point before starting the next cut.

Did you re-zero your Z for a new tool each time?

edit - It doesn't look like a "Z" issue but asking anyway.
Maker of sawdust
Top

I am seeing the same as Adrian is seeing.

Looks like everything is OK until the last cutout cut.

Did something happen when you changed out to the last cutter?

It is VERY unlikely that there is a programming issue - UNLESS - the cutout toolpath got bumped out of position, but that would show on the preview before posting code.
Imagine the Possibilities of a Creative mind

I had odd cuts like that before and it ended up being my control box and pendant didn't have the latest updates. It's worth checking either way.
Top

ElderlyGent wrote:......I can understand why some people reach a point of frustration and are tempted to abandon CNc and get involved in some other hobby,
Hoowever, I have always lived by the motto, Sheer determination., and this has served me well over the years,

Good motto to have. Operating a cnc machine is like most things in woodworking, one has to pay attention to all the details. There is no free lunch.

The folks who get frustrated usually do so because they think running a cnc machine should be a simple button push and Voila! instant gratification. Even us guys who have been doing this stuff for 40+ years goof up now and then. The difference between us and a new person is that we have screwed up so many times we usually know exactly what we did wrong.

There is a precise sequence of events that has to happen before a part gets cut correctly. I think of it like an airplane. Forget to put the flaps in takeoff position and the plane crashes on Interstate 90 shortly after "taking off". Forget to put the gear down and the next sound heard is the screaming of sheet metal on concrete.

I would be willing to wager that most mistakes occur towards the end of the day in the shop, just like most of the other accidents. In a rush, getting a bit tired. . .ooops.

BTW, that is a pretty neat design you have there!
"If you see a good fight, get in it." Dr. Vernon Jones
Top

First, thanks for all the help it is much appreciated.

Then, I did rezero the Z each tool change, so that was OK as the cutter started in theright place and height..

Not having a dust boot I have to follow the cutter with the shop vac otherwise the shop will soon be full to the knees with chippings and dust. so I am sure there was no bumping .

I will try it again with the same toolpaths but using other timber. This last one was Sapele as I washoping to make a decent set of coasters, The previous single ones were fine, It was only the 4 together that went wrong.

Guess the next result will be either entertaining or agravating, I will let you know.

Happy you liked the design,

Was the single one the same wood? If not did you changed the feeds/speeds for the new wood? You might have been pushing the machine too hard for the denser wood and lost steps in that case.

The top left of the 4 has marks that look like it started in the right place.
Top

It’s unlikely, but possible, that your ShopVac produced an electrical interference during the project run.

Thousands of volts of static electricity can be produced during ShopVac use. Perhaps a small spark from the vac caused the machine to get “lost” during the project run.
Michael Tyler

+1 to what Michael said(but not sure in this instance).
We had a Shopbot guy that was losing coms, and location...and turned out it was his shopvac static.

Still looks to me like some problem with "Homing" after the bit change for the Cutout.
scott
"Go not where the path may lead;
Go instead where there is no path, and leave a Trail"
RWE
Top

Thousands of volts of static electricity can be produced during ShopVac use. Perhaps a small spark from the vac caused the machine to get “lost” during the project run.

Michael has a great point.

Which leads me back to the re-zeroing the "Z" after each cut.
Do you use a "Z plate" or do you set "Z" manually?
Maker of sawdust
Top

If you haven't I'd still check the firmware versions and update them if there are newer ones. It fixed a few problems I had on the Shark HD and the PiranhaX has some of the same parts, the pendant is the same anyway. I have holes in my table bed from it just stopping mid toolpath and driving straight down, as well as quirky cuts that don't match up to the actual toolpath. But after updating all the wrong cuts I have now seem to be 100% human error

My vote is that your material was not centered within the machinable area of your table. The center portion machined properly because it was far enough from the edges of the table. The outer portion was too close to the edge of the table and steps were lost as the router hit the limits of travel.
With the router turned off, carefully jog the router to the limits of the X and Y travel. Mark these limits with tape. Check to see if you are working within these XY limits.
Bob
hammer...nails...stuff
Top

Bob Jr. has a point... I have a 6040 machine and I sometimes get close on my limits. Since it is hard to judge by eyeball, I draw a square line around all the vectors and do a profile to make sure it is not hitting any limits OR hold down screws. As others have said about the static with the shopvac... I had that issue too. It is mostly resolved since I updated my shopvac with a cyclone that has a ground metal tape on the cyclone. I still see some static when using the vac during cutting.. but not nearly as bad before the cyclone. Some folks somehow put their own ground wire to the shopvac. I haven't figured out how to do that yet... but as I said, I haven't had any serious static issues since I got the grounded cyclone. Hope you get it worked out... and I agree, that is a nice coaster design!
Top

I am now sure that BOB got it right. The Piranha FX does not have limit stops and if you go too far it bangs right onto the end of travel.
Looking back it does seem that the top limit was JUST reached without any banging or clanking and moved left level until it needed to continue the cut. this then lost those steps with the result as seen.
Bearing this in mind I redid the whole thing making more than sure the cuts were well withing the machinable area,

I did a skim surface thin pocket cut of the spoil board area initially but it is well possible that that had moved. I must do it again to make sure that anything that fits inside the pocket is within the machine area.

Many thanks again for all the help. All duly noted.