Pretty scraggly looking to start with, but surfaced the backside and cleaned it up a little

.....THOUGHT it was going to be on Owl, but the shape and a dead branch kinda nixxed that idea.

Kinda liked the natural shape, and didn't want to cut it all away.

Went looking for models, and was search "Cliff Dwellings" when I ran across a pic from Sketchfab for Cave Buddha.
It was a free model by Di Luo and I pocked this one she modeled;
https://sketchfab.com/3d-models/yungang ... 9c60f1183e

Darn...had it all written and now it won't paste.

Anyways.....The cut will all come down to size and placement mainly,and did NOT want to muck up the Oak piece.
So searched my short Black Walnut pieces I cut for thing like Fox in a Log, and found one of similar height and rough profile.

Now jigged up and should be finished calculating now.

Using all Finish Toolpaths and roughing with a long 1mm Tapered Ball Nose(TBN), by cheating Z-zero Up, and then cutting down in stages....Model height is 1.27", so first upcheat was 1" UP.
ALL Safe-Z's are .01"....nervous first start

I am so glad I am not the only one

I don't think I have an artistic bone in my body

Thanks for the compliments, BUT when you see the IDIOT move I made that resulted in an addition to my Wall of Shame....
You'll wonder if I should be allowed to TOUCH a CNC!

2AM after 3-4 hours of sleep....
I downloaded 3 Anasazi "Cliff Dwellings", and then saw the Buddha, and found 4 Buddha Caves.....wrote a note on a Post-It to start with Cave 20...
And imported and left it as imported, and started initial version.....I claim sleep deprivation on starting that first one and not noticing my mistake!

Even NOW it looks like the Buddha face is level with the stone and the face is proud like in the last pic posted....

BUT in reality what I carved was a Buddha Mold!!!

Because I had two visits, and had changed to "Material Size" instead of "Selected Vectors" at last minute to make it easier to compare to the Oak side by side, and was running without DC so I could hear machine while doing things close by...AND was running it as a Finish Toolpath, and just cheating my Z down between passes,
I never brushed it off or was there while it was cutting the Head depression(I just lowered Z-Zero and pressed Replay Recent command)..
Only inspected it at 1" depth, and went "OOPS"(not really the word I used:)

It was 2 pm by that time, sooo Quickly searched Black Walnut Shorts to match the one I mucked up... rotated till profile was correct...clamped and redid the new dimensions...
THEN changed to SUBTRACT mode!!
And cut till 8:30pm...took quick pics and slathered with my wood butter.

A real comedy of errors!!!
Don't even program when tired!

Couldn't cut yesterday because of Drs and things.
Spindle warmed up for last pass with the 1mmTBN....have to measure bark left on his face for next pass depth.

I already have the info I need for the Oak....but as long as I've got the in this one...I'll make this one look as good as possible, might need more depth(?).

Looks like model needs to be resized for the Oak firewood....as I want his arms and more of the "Cave" carved.
Glad I did this concept cut....even with my "Chocolate Buddha Candy Mold" that caused my Rep a few points

Again...thanks!
Let's see if I can NOT muck this one up at the last moment!!
scott
scott
Top

Best laid plans and all that, I did notice on the link you gave me the model was open back, put it down to optical collusion, but still looking good fits in well to the log.

"Gang aft agley,. " I wouldn't say it was the best laid plan though Phill

Of 4 "Buddha Caves" 2 I downloaded looked like that, with the heads surrounded....and I wrote "Cave 20 First" BUT forgot to add a .jpg to the folder, and never checked

Next time Phill...an "Ah scott....are you SURE you want to cut it that way?" would be appreciated.

OK...Last Finish Roughing pass with the 1mmTBN wound up being .2" and looked good.

and 6 hour cut started 30 minutes ago

DC is off because of Linseed/beeswax Goop...and so I can hear machine while doing housework(or reading in bed:) 50 feet max away.

OK, here it is simply brushed and blown off;

And, unjigged with one coat of pine resin mixture; 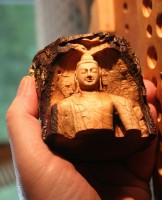 IF this wasn't a test/concept cut...I would have centered on the pith....But because I was going for the profile for the Oak, I centered on the highest point where the two profiles were most similar.
Have to proportionally scale it down to get more of the "Cave"effect on that size profile, so going to lose some detail

Having doubts now how the Oak will look...but going to cut it anyways after another couple coats to firm the spalted very slightly punky outer quarter inch.

Think a bigger one with a larger diameter branch and the same .25mmTBN in a light color wood with tight bark would look Neat!
LOTS more of the secondary carvings would show.

Wish that Sugar Maple I just cut was dry!!

I'm happy to see this last smallest Black Walnut branch that had staining and a little spalting looks OK cut!!

Scott, awesome project.
Thank you for bringing us along for the ride.
Looking forward to seeing your larger version.
Maker of sawdust
Top

THINK this last piece taken3(4?) years from Libby's Camps woodpile might be the best choice for the Buddha Cave.

Lot of non-CNC work to begin with,but getting the back flat for the front cutting plane was critical(I came kinda close).

Took more off than wanted, but need the 3"long Tapered Ball Noses for this....and it was just too tall flipped.

Now to get sides to finish (scraper/flap wheel?). and then prep front face with brushes/sanding/light finish.