Script fonts that carve well out of the box?

Script fonts that carve well out of the box?

I've been trying to help someone VCarve Script style fonts, and ran up against the old problem that some fonts are just to delicate to carve unless you cheat the Z down,
Lie about the bit, or requires node editing.

To match his projects supplied by a third party(non-Vectric so converted to vectors), I did a down and dirty file of the .5" "Bold" Script fonts on this computer.

Used a 30 degree Engraving bit with a .005" flat as both he and I have one, and fairly common commercially. Also can be described as a VBit with not too much cutting or Preview distortion.
Sorry it's Zipped, but too large even after taking the problem fonts(node editing required) and single letter Calligraphy styles out.


Vladimir Script is my Go To because most of my stuff is in the .15-.25" Font Height range, and it cuts well pretty much out of the box(and people seem to like it:)
VERY rare for me to cut .5" font, especially connected Script styles, so reaching out to people who do.
Please use a similar bit, and same size and settings to help him inform his graphic designer.
A screenshot of the cut would be most helpful, as one carving he's been requested to paint.
Cherry and Poplar on 2 projects so far.

Any help appreciated, and not fully caffeinated so didn't know if this has been covered, but might as well post as I've modded the file....Links welcome

Figured we may come up with useful info for all as well.
Thanks!
scott

IF perchance you've got a Script or Calligraphy Font that carve well out of the box in My size range....I wouldn't be Totally averse to you posting it!!

Are you familar with this site - it will display a phrase you type in to the site using all the fonts on your computer.
No texactly what you were asking but it may help.
Top

Thanks Pete..wasn't familiar with that:)
Hoping more for personal experience from the members though.

For instance, I know Darn well I like "Vivaldi", BUT made the mistake of offering it to a customer, and spent so much time Node Editing it...I Used to know All the problem letters with VCP unreadable overlaps...And the quickest way to fix them, BUT I probably spent a couple days over a year Node Editing almost every job for him

I saw the "French Script MT" has the same problem, and wouldn't touch it with a 10' pole now

I also know "Vivaldi" requires more Node Editing to do a Zank VIP without hours of tiny chisel work...to my chagrin!!

Hoping for a flowing, not Too delicate interconnected Font, that carves out of the box with a 30 degree engraving bit with a .005" flat that only needs Kerning.
Deep enough lines so he can use a thicker finish than my oils...and have the option of painting in a .5" Font height.
Have over 300 fonts on my laptop, and REALLY need to clean those up someday, but DON'T want to go searching through all those at the moment to help someone else if I can shortcut with the knowledge of the forum.

Thanks Pete!
scott
"One accurate measurement is worth a thousand expert opinions"

Take a look at some of these
Top

Generally I tend to avoid script fonts like the plague but where there's no alternative and the lettering is small (10mm or so) my go to font is Ballpark. It's got a fatter stroke width than most script fonts so carves well at the smaller sizes.
Top

Thanks Pete,
May just have to do it the "old fashioned"way...Myself!!

DO see a couple I might like to add for my own personal use, after importing and running VCP test carves to check for overlaps.

THIS time I'll keep a list so I can delete from my Windows Fonts if they don't carve without Node Editing!

Downloaded Ballpark for my own use. You are right...looks like it will carve Tiny, AND be a good Font in a pocket

Could have used a couple years ago when experimenting. Took me 6 test cuts of gradually increased sizes to determine I couldn't cut buttons for a Shopbot Camp attendees with a raised script font.

Would also have helped with a Topo file accreditation, that was just too Tiny for Vladimir Script font in Claro Walnut.
Ballpark would have worked better! 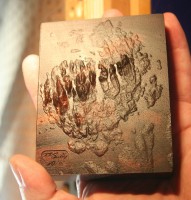 )?
A definite advantage to doing the files yourself are the options available.

Thanks!
scott
"One accurate measurement is worth a thousand expert opinions"